A poet, a postman and a professional golfer are among 69 owners of Cabaret Queen who are dreaming of winning one of the most historic prizes in jumps racing after 63 horses were entered in the £250,000 Ladbrokes Trophy, run at Newbury Racecourse on Saturday 30 November.

They are among a group of first-time owners who have earned an unexpected shot at the big time through their involvement in Syndicates Racing for whom £13,000 buy Cabaret Queen has already delivered a runaway success in the Ladbrokes Munster National to become the sponsor’s 8-1 joint favourite with Mister Malarky, trained by two-time winner Colin Tizzard.

Cabaret Queen is among nine horses, which also include former winner Total Recall, trained by Ireland’s champion jumps trainer Willie Mullins, in another high quality entry for the 3m2f handicap chase, the feature event of the two day Ladbrokes Winter Carnival at Newbury.

Mullins, who captured the race for the first time in 2017, has also entered Cheltenham Festival winners Rathvinden, winner of the 2018 National Hunt Chase and this year’s Grand National third, and Yorkhill, who won the JLT Novices Chase in 2017 and Neptune Investment Management Novices’ Hurdle in 2016, in a team completed by Voix du Reve, Pleasant Company, Acapella Bourgeois, Chef Des Obeaux and Real Steel.

While Mullins has the biggest entry, there is strong interest from the stables of Nicky Henderson and Dan Skelton, who have six horses each, Colin Tizzard, five, Paul Nicholls, four, and Gordon Elliott, two.

Tizzard, who has won the race in two of the last three seasons and saddled the one-two in 2018, has included last year’s runner-up and Coral Welsh National winner Elegant Escape in his team but has nominated previous course winner Mister Malarky, one of last season’s leading staying novice chasers, as his prime candidate.

The J P McManus-owned Ok Corral and Beware The Bear, winner of the Ultima Handicap Chase at Cheltenham this year, head the Henderson team while Nicholls’s top rated entry is Yala Enki, who is new to the yard this season.

Le Breuil, trained by Ben Pauling, and Discorama, from the stable of Paul Nolan, who filled first and second place in the 2019 National Hunt Chase, have also been engaged. Pauling has also entered Kildisart.

Cabaret Queen announced herself a live challenger when coasting to an easy victory in the Ladbrokes Munster National on only her second start since joining the Mullins stable, earning her the chance to become only the second mare to win the Ladbrokes Trophy, 60 years after Kerstin’s victory in 1959.

Syndicates Racing is run by 28-year-old London-based solicitor Jack Cantillon, who said: “After the Munster National win the Ladbrokes Trophy was mentioned. The minute you talk about that race you have memories of Denman, Strong Flow, Native River, all these wonderful horses.

“So to have a horse that you are connected with that has the ability to run in the race is an almost preposterous thought given we bought her for £13,000 in May. She has only run twice but already we are on an incredible journey to be able to run at such a wonderful course like Newbury in such a terrific race like the Ladbroke Trophy.”

Cantillon bought the seven-year-old mare in February as much for her pedigree as her ability and has leased her to the syndicate members, many of them first-time owners who have between one and ten per cent stakes.

“I thought there was potential there and the talent of Willie Mullins knows no bounds,” Cantillon said. “To win a Munster National by 13 lengths certainly was not remotely on our radar in terms of even the outer reaches of what we thought she might achieve.

“She would have the profile perhaps of Willie’s previous winner Total Recall in so far as he won the Munster National very impressively after a change of trainer. He went to Newbury two years ago and was successful under Paul Townend.

“The memory of that race so recently for Willie was what pointed this as the target for Cabaret Queen.

“We have 69 people in the group. There’s a poet, a postman and a professional golfer. It’s a cross-section of society. They are so excited to say they have a runner in such a wonderful race. Fingers-crossed she comes through her preparation okay and we have a wonderful day out at Newbury.”

Cabaret Queen had a handicap rating of 122 when she raced in Britain last season but was raised 16lb to 142 when reassessed by the Irish handicapper for her latest win.

Nicola McGeady, Head of PR for Ladbrokes, commented: “It is great to see another quality list of entries from both the UK and Ireland for the third running of the Ladbrokes Trophy.

“It is no surprise to see Willie Mullins’ Cabaret Queen at the head of the market following her impressive performance in the Ladbrokes Munster National.  Also among the front runners, we have Colin Tizzard’s Mister Malarky and Albert Bartlett runner-up Ok Corral.

“Last year’s race was a fantastic renewal when Sizing Tennessee won and this year’s entries look sure to provide us with another enthralling battle.”

The weights for the Ladbrokes Trophy will be published on November 6. 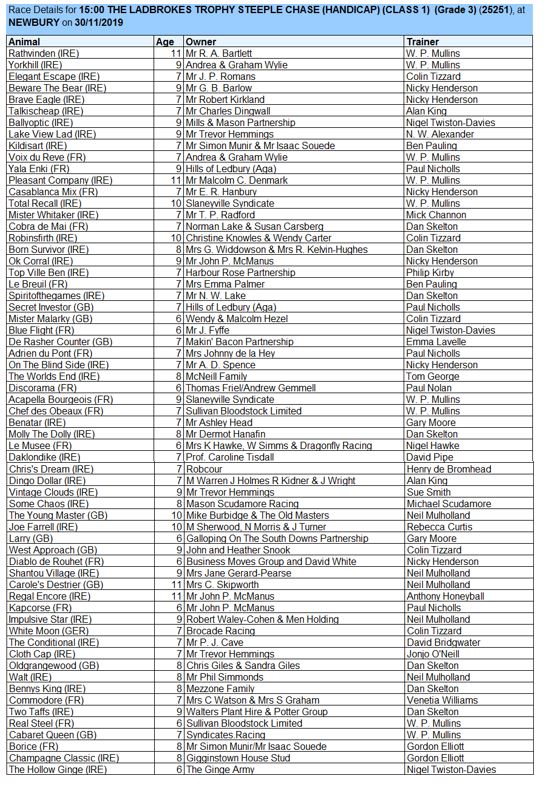