Dan Skelton believes Zarib has plenty in his favour ahead of the £155,000 Betfair Hurdle (3.35pm) at Newbury tomorrow on Betfair Super Saturday, February 13. The two-mile highlight is the richest handicap hurdle staged in Britain.

Zarib scored easily over the course and distance on his hurdling debut last season and went on to finish sixth in the Fred Winter Juvenile Handicap Hurdle at the Cheltenham Festival.

The five-year-old (pictured in red below) has run two good races this term, finishing third to Irving in the Grade Two Elite Hurdle at Wincanton in November before a staying-on sixth behind Jolly’s Cracked It in The Ladbroke at Ascot on December 19.

Skelton, who trains in Warwickshire, said today: “Zarib is in good form. We are trying a few different things tomorrow; we have put the cheekpieces on and are taking 5lb off (by using claiming rider Bridget Andrews). 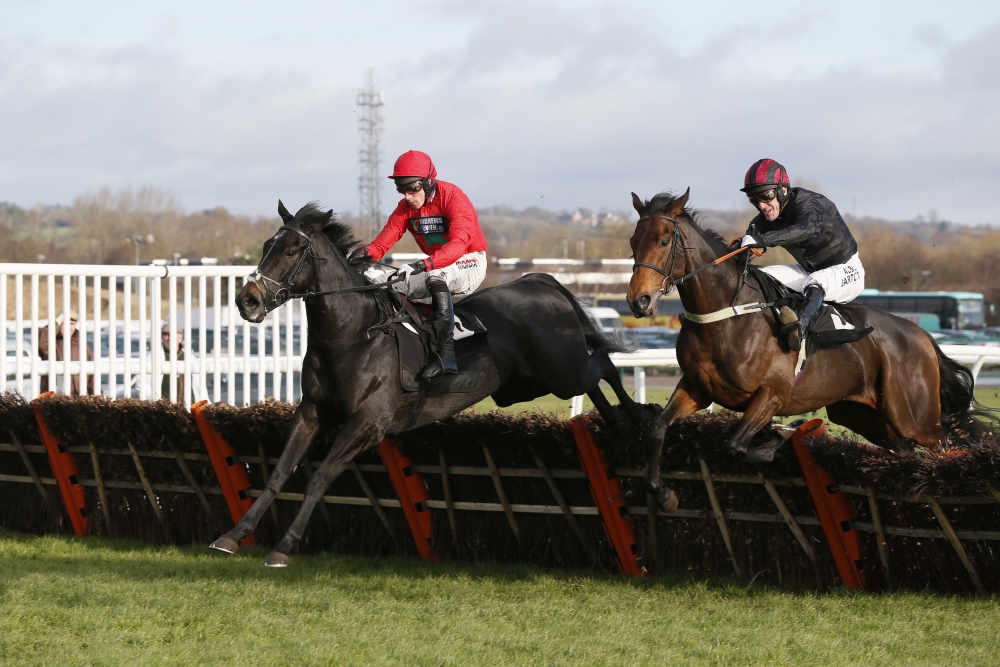 “He has a chance but I thought he would be in the first four at Ascot and he wasn’t. He ran ordinary there last season whereas he has won nicely at Newbury and that has to be a bit of a positive.

“He goes on the ground, has got under 11st and I’m expecting him to be competitive, but that will be the case for 15 others!”

Zarib, weighted at 10st 7lb before Andrews’ claim is deducted, is a 16/1 chance with Betfair. The market is topped by Irish challenger Blazer (Willie Mullins/Barry Geraghty) who is officially 7lb well-in after making short work of his rivals in a handicap hurdle at Leopardstown on Saturday, February 6. He is Betfair’s 7/2 favourite.

Betfairspokesman Barry Orr commented today: “We have seen decent money for the Brian Ellison-trained Forest Bihan, who is now 12/1 from 16/1 and the Lizzie Kelly-ridden Agrapart, who is 20/1 from 33/1, but Blazer continues to be all the rage at 7/2.

“It hasn’t been lost on punters that Willie Mullins is, somewhat uncharacteristically, turning one out so soon after a victory and Barry Geraghty is set to ride it at his minimum weight of 10st 4lb.

“Blazer has been the smash-up job since his Leopardstown win and he could have a big say in the destination of the trainers’ title.”