Worthingtons Armed Forces Day at Newbury Racecourse was a great success this Saturday with brilliant action on the track complemented by an array of attractions and activities. 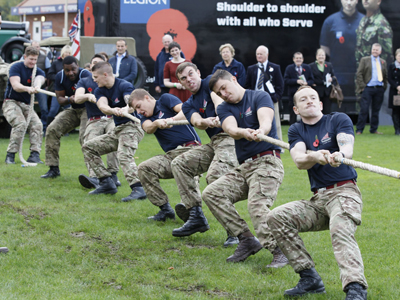 The tug of war competition was hugely popular, as teams from the Armed Forces went head-to-head to scoop the cider prize donated by the day’s sponsor, Worthington’s. The winners were the 4 Logistics Support Regiment from Abingdon.

Alongside Harry the Horse and his funfair the military vehicle display was a real treat with some classics from military history.

Stephen Higgins, Managing Director at Newbury Racecourse, commented: “We’re always proud to show our support for the armed forces and this afternoon was a great way to sign off the Flat season here.

“The racing was great, the crowd really enjoyed themselves and the weather behaved itself – nearly!”