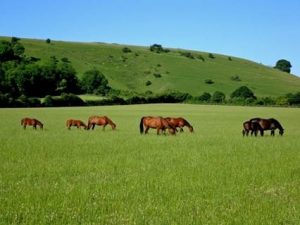 Mares and foals grazing at Watership Down Stud

Watership Down Stud, the leading breeding operation established by Lord and Lady Lloyd Webber, is to become the new sponsor of the Group 3 Greenham Stakes, one of the key Classic trials of the Flat season in a three-year deal announced today.

The Group 3 Watership Down Stud Greenham Stakes will take place on Saturday 13 April as part of Dubai Duty Free Spring Trials Weekend. The race has been the stepping stone to stardom for Frankel, who went on to win the 2,000 Guineas at Newmarket, as well as Kingman, Muhaarar and Barney Roy, all subsequent Group 1 winners, plus Night Of Thunder, who captured the 2,000 Guineas after finishing second to Kingman at Newbury.

The value of the race will also be increased to a total prize fund of £70,000.

This year’s race looks set to be especially informative, being the nominated target of last year’s European champion two-year-old Too Darn Hot, who is owned by Lord Lloyd Webber and was bred by Watership Down Stud.

Too Darn Hot was rated the best juvenile since Frankel and Dream Ahead when awarded the same rating of 126 to top the 2018 European Two-Year-Old Classifications after completing an unbeaten campaign with victory in the Group 1 Dewhurst Stakes.

He is the latest success story for Watership Down Stud, located at Burghclere near Newbury, which also produced one of last season’s leading three-year-old fillies Lah Ti Dar, who finished second in the St Leger having made a winning debut at Newbury in April 2018. Watership Down Stud also bred her dam Dar Re Mi as well as other notable fillies including The Fugue.

“It is also a wonderful coincidence to have the promising Too Darn Hot as a potential contender for the race. The Lloyd Webbers have such a close association with this racecourse and are big supporters of the industry which makes this partnership even more meaningful.”

Julian Thick, Chief Executive of Newbury Racecourse, said, “We are delighted and grateful that Watership Down Stud has come on board to sponsor the Greenham Stakes.

“It is always an exciting race to start the season, with an illustrious Roll of Honour including some of the great sires, Kingman and Frankel. It seems the perfect fit to have such a prestigious breeding operation as the new sponsor and we are delighted to be running it with an increased prize fund of £70,000.”

The race was first established in 1906 and named after the civil parish of Greenham, within which Newbury Racecourse sits, and the seven-furlong contest subsequently became one of the leading Classic trials for colts in Europe.