Newbury’s final fixture of 2017 on Saturday, December 30 took place before a healthy crowd of almost 9,000.

Mulcahys Hill raced in second before leading on the far side of the course. He went clear early in the straight, but Poetic Rhythm came with a good run to challenge at the last and led on the run-in but had to battle strongly close home to hold on. The pair finished clear in the extended two and a half mile race.

It was a first Grade One victory for Gloucestershire-based trainer Fergal O’Brien who said: “That means the world – it is brilliant for everybody.

“To get that Grade One was a bit of a monkey off my back and a relief. We have had a good couple of seasons. Paddy knew what he was going to do with the horse today.

“Three weeks ago Poetic Rhythm was at the vet’s with a bit of colic, but if you want to pick one horse out to go to war with he is your boy. He never ever lets us down, he is so tough, though we have let him down a couple of time by putting him in the wrong races.

“It is a fantastic win – it was two good horses fighting out the finish. I couldn’t watch from the last hurdle. The ground did not help today and we will be aiming him at the Albert Bartlett Novices’ Hurdle at the Cheltenham Festival in March.

“He won’t run again in between. We will freshen him and give him a nice break. We have a great team of people at the yard and Chris (Coley – head of the Yes No Wait Sorries Partnership), who bought this horse for £30,000 at Cheltenham Sales two years ago, has backed me to the hilt. We had to give the horse time but he has rewarded us.” 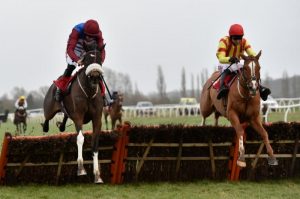 Poetic Rhythm (right) at the last with Mulcahys Hill

Nayati, the only newcomer to hurdles in the field of seven, won the opening Betfred “£5K BTO Cash Draw Today” Juvenile Hurdle in good style.

The 10/11 favourite, trained by Alan King and ridden by Wayne Hutchinson, beat Kapdad (Gary Moore/Joshua Moore, 12/1) by two and a quarter lengths, going clear with the runner-up before leading after the last.

The French-bred won a 15-furlong Flat maiden in his native country in October and then was  bought by present connections.

Wiltshire-based King explained: “Nayati has only had two runs in his life before today and he is going to learn plenty from this race.

“He handled that ground, but I don’t think he particularly wants it. We have got to the stage where we have got to get them started, as I said with Redicean (who won on debut at Kempton on Wednesday).

“Wayne said Nayati was a real good-actioned little horse and I’d like to think he will improve on better ground. He is my first winner for Mike (Grech) and Stuart (Parkin) so it is a great start.”

Hutchinson added: “Nayati has a likeable attitude and jumped well. He settled better than I thought he would.

“He has knuckled down well to win this race.”

The starting tape went up but none of the six runners (non-runners no 4 Mere Ironmonger and no 8 Midnight Move) wanted to go on so there was stalemate for quite a few seconds.

Eventually, the strongly-backed 6/5 favourite First Flow (Kim Bailey), successful on his hurdles’ debut at Lingfield last month, took them along under David Bass.

The four-year-old went clear from the second last hurdle and scored impressively by 20 lengths from 3/1 chance Dell Oro (Gary Moore/Joshua Moore) the only challenger who could get within striking distance at any stage.

Gloucestershire-based Bailey commented: “I am delighted.

“He won well on soft ground at Lingfield. He is a buzzy sort of horse – we ran him in two bumpers to try and get him to relax and settle down.

“There is not a huge amount of him – he is a very narrow horse, very tall. He was really impressive today, though I don’t know what the form is like.

“He just loves that ground and the going is the key issue for him. David is unbelievably good when riding horses from the front, with a clock in his head.

“Our plan was not to go to the front but, having said that, the ridiculous start, we had to do something and First Flow was relaxed in front, racing with his ears pricked and jumping well.

“David was brave enough to go and do it, which is why you have a stable jockey. I will be in no rush with First Flow – as I have said the ground is the key issue with him.

“He does not take his races very well. He eats well, but it is very hard to keep condition on him – the weight falls off him. He will have one or two more starts this season and then hopefully go chasing next season.

“It is very unlikely he will go for the Cheltenham or Aintree festivals – Sandown or Haydock would suit him better. I am going to mind him. He is a horse with an immense amount of ability and if we can keep him in the right direction for a few years we will have a great deal of fun.

“Tony (Solomons – owner) has been with me 10 years now, through good times and bad times, and he has never wavered in his support. He has been very lucky owner – I have had some nice horses for him including Harry Topper who was due to run fairly soon before a slight schooling accident.”

Four started but only two finished after Chirico Vallis (Neil Mulholland/Noel Fehily) fell at the sixth and Got Away (Oliver Sherwood/Leighton Aspell) came down at the eighth.

7/4 shot and top-weight Saint Calvados, bred and raced in France before coming to Britain last year, made all under Aidan Coleman on his first start for trainer Harry Whittington.

The four-year-old saw off the 13/8 favourite Remiluc (Chris Gordon/Tom Cannon) by nine lengths.

Whittington, who trains near Lambourn, remarked: “Saint Calvados is talented and hopefully he will take us to some good places. He is just always in second gear at home.

“It is good now to see him do it on the track, especially on his first start over fences. He has been a natural when schooling at home – he has not put a foot wrong.

“He just cruised around on this ground. Aidan (Coleman) mentioned the Scilly Isles. We will let the dust settle as I’d never thought about it.”

There was a remarkable result as the winner Brave Eagle (Nicky Henderson/Nico de Boinville, 11/4) had been prominent early on but dropped back to race last of the seven runners before the straight.

He was still last two out, but was switched to the far side when the 5/2 favourite Diable De Sivola (Nick Williams/Lizzie Kelly) fell.

The front-running Theligny (Tim Vaughan/Alan Johns, 7/1), the previous year’s winner, had been headed by Huntsman Son (Alex Hales/James Bowen(5), 9/2) before two out but regained the advantage after the last and looked all over the winner before Brave Eagle, who finished fast, got up in the closing stages by a half-length

So on the day it was revealed Henderson had been honoured by The Queen, the local trainer celebrated an unlikely winner. He said: “That was one of the most extraordinary races I’ve seen for a long time.

“We ran Brave Eagle the other day in horrible ground at Exeter and I thought he hated it, but it was so bizarre down there I thought I’d give him one more try on such ground.

“At halfway I had given up again, thinking he hated the ground and we’d keep him for the spring, but then he crept back into it, then he dropped out again although I don’t know how he got up. Good old Nico.”

De Boinville added: “I was just thinking of getting around rather than getting in the frame turning in.

“The others had obviously gone quite hard in front and I just managed to keep tabs on them and then two out Lizzie fell – I hope she is all right – and I switched him to the inside of the course. Usually, I would have headed down the stands’ side where the ground is better, but I switched almost onto the chase track to get fresh ground which definitely helped.

“Jumping the last, I thought let’s go for it now and it was a good feeling – he has won despite the ground.”

Bold jumping 11-year-old grey Grand Vision (Colin Tizzard/Harry Cobden) disputed it or raced a close second of the nine runners before going to the front down the far side.

The 16/1 chance’s continued excellent jumping kept him in front until headed after the last by five-year-old Daklondike (David Pipe/Tom Scudamore, 6/1) who forged on to win by three lengths, despite drifting in the betting market.

Tom Scudamore declared: “He’s one of those you’ve got to just keep on pushing and kicking and hope it comes right and it did.

“Daklondike is a tremendous character and he has really taken to chasing. For a five-year-old to be able to do that today, he’s improved 19lb already over fences and will go up more again for that performance. He has really battled and jumped. The future is bright for him.

“Long term, the way he’s done that you’d have to say he’s a National horse, whether that is the Grand National at Aintree or the Midlands’ version, I don’t know, but he is really progressing nicely and the whole team have done a good job with him. He is a nice Saturday winner to have for Caroline (Tisdall) who has been such a great supporter of Pond House.

David Pipe said: “Tom has given him a fantastic ride – the horse has to be kept up to his work.  Daklondike definitely makes Tom earn his fee – he did also at Wincanton last time – but in fairness to the horse he kept on responding.

“Long-distance chases are for him – it probably wasn’t soft enough out there for him – and it was great to win last time out at Wincanton and here.” 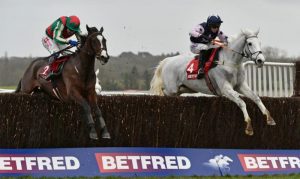 Rocklander (Tom George/Adrian Heskin) made all to beat Duke Des Champs (Philip Hobbs/Tom O’Brien) by three and a quarter lengths.

His trainer Tom George commented: “He has jumped very well today. It was just unfortunate what happened at Doncaster previously when he unseated at the first. Today, you wonder why that happened.

“I could not be happier with him. It is probably not ideal making the running with him, but somebody had to and he was probably saving a little bit. It was a good performance.

“He has won off 138 today and we will probably go back to Graded novice chases. He is a very versatile sort of horse.”

Adrian Heskin, whose parents attended Newbury today, said: “They brought me a bit of luck.

“He is still very inexperienced over fences so it was not ideal to make the running. He concentrated better today and put in a good solid round.

“He is a lovely horse – he improved a huge amount over hurdles last season.”

The first action of 2018 at Newbury takes place on Wednesday, January 17 with Betfair Super Saturday following on Saturday, February 10.