The stars on the track include The Grey Gatsby (Kevin Ryan/Declan McDonogh) who headlines six runners for the first of the three Pattern races on the card, the £60,000 G3 Dubai Legacy Cup (1.45pm) over 11 furlongs.

The Grey Gatsby ranked among the best of his generation in 2014, thanks to G1 triumphs in the Prix du Jockey Club and Irish Champion Stakes, in which he defeated dual Derby victor Australia.

The five-year-old was runner-up three times at the highest level in 2015 and has not been disgraced in three starts this term. He was last seen out when finishing sixth behind Postponed in the G1 Juddmonte International over an extended 10 furlongs at York on August 17.

Adam Ryan, assistant to his father Kevin, said today: “They Grey Gatsby came out of York great and the plan was to go for the Irish Champion Stakes but unfortunately the ground went against him.

“The Newbury race looks a good back-up option, dropping back in class. Apart from one run this season, he has been competing at the top level for the last three years and, if he comes back to his best form, he should be the one to beat.

“It does look a good renewal though with the likes of Dartmouth in there.
“The Grey Gatsby has got the Arc, Breeders’ Cup and Champions Day as options after this. But he is a ground dependent horse and we will go wherever the ground tells us to.”

Dartmouth (Sir Michael Stoute/Ryan Moore), owned by Her Majesty The Queen, captured the G2 Hardwicke Stakes at Royal Ascot and was third to Highland Reel last time out in the G1 King George VI & Queen Elizabeth Stakes over 12 furlongs on July 23. 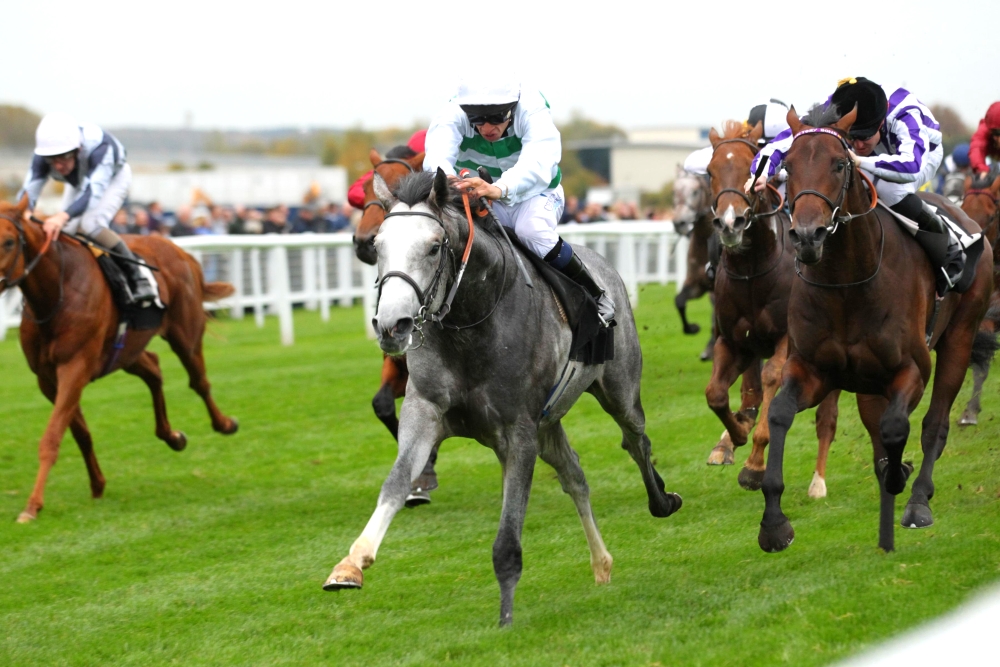 Heading the declared runners is Mokarris (Simon Crisford/Paul Hanagan), who landed the Listed TKP Surfacing Rose Bowl Stakes over the course and distance in May before going on to take second in the G2 Gimcrack Stakes at York last month, when he had Global Applause (Ed Dunlop/George Baker), Grey Britain (John Ryan/Jimmy Fortune), Medici Bancherie (Karl Burke/Jim Crowley) and Unabated (Marco Botti/Andrea Atzeni) behind him.

Sprinters get their chance to shine in the £60,000 G3 Dubai International Airport World Trophy Stakes (3.25pm, 12 runners) over five furlongs.

Alpha Delphini (Bryan Smart/Connor Beasley) comes into the race on the back of success in the Listed Beverley Bullet last time out, while Priceless (Clive Cox/Ryan Moore) also scored at Listed level last time out, taking the Scarbrough Stakes impressively at Doncaster on September 7.

The eight-race card on Saturday starts at 1.10pm and finishes at 5.05pm.

Legendary music producer Mark Ronson will play a DJ set after racing on the Saturday. The multiple Grammy and Brit Award-winning Ronson is famed for producing seminal albums such as Amy Winehouse’s Back to Black and Adele’s 19. He has also collaborated with artists from Christina Aguilera to Duran and was responsible for the worldwide number one hit Uptown Funk featuring Bruno Mars.

Tickets are still available for the Saturday of the Dubai Duty Free International Weekend and can be booked here.

The Dubai Duty Free International Weekend gets underway tomorrow, Friday, September 16, with an eight-race programme running from 1.40pm to 5.30pm.

There is also fascinating two-year-old action in the shape of the £16,000 Haynes, Hanson & Clark Conditions Race (3.55pm, 8 runners). Superstars Henbit, Shergar, Rainbow Quest, Unfuwain and Nayef all feature on the roll of honour for the mile contest.