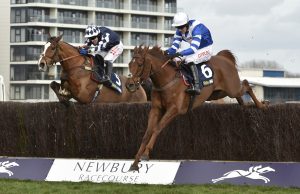 The Grade 3 William Hill Supporting Greatwood Gold Cup is becoming a Paul Nicholls benefit after the ten-time champion jumps trainer extended his domination of the feature Newbury chase to nine victories with San Benedeto on Saturday.

One of three stable runners in the field for the £50,000 race, supported by William Hill, San Benedeto emerged from a recent slump in form to beat Gala Ball by two and a quarter lengths and secure a welcome comeback victory for Nick Scholfield on his first ride for three weeks.

Scholfield had been sidelined by a fractured leg sustained in a training accident but his win was his third in the race, all for Nicholls.

“Nick’s ridden San Benedeto before and won on him at Aintree,” said Nicholls. “He’s had a bit of a tough time lately with an injury and this was his first winner back.

“The horse has run ordinary all season apart from in the Haldon Gold Cup. We changed things for him, kept him fresh and this was a perfect race for him on that ground and knowing they would go a good gallop.

“Sometimes horses like him on the fringe of graded races are better off in handicaps. He’s been amazing, he won six one year including a Grade 1 and he will go to Aintree now for the Topham Chase.”

It was a double on the day for Nicholls as McFabulous secured victory in the final race, the ITM Supporting Greatwood Standard Open National Hunt Flat Race for jockey Lorcan Williams. The Milan gelding went clear in the last furlong to win by six lengths.

Champion jockey Richard Johnson was stood down by the racecourse doctor after taking a heavy fall in the opening race and missed a winner when Crooks Peak took the In Memory of the late Michael Yeadon Handicap Hurdle under Barry Geraghty.

Johnson took time to get to his feet after Tapaculo came down at the last hurdle of the Peter O’Sullevan Charitable Trust HOPE Programme Seniors Handicap Hurdle, won by First Drift, who was a first Newbury winner for trainer Ben Case.

Philip Hobbs, trainer of Crooks Peak, said: “It was a shame Dickie missed a winner but I am sure there will be plenty of others.

“He is sore. Apparently the edge of his body protector caught him in the back. It’s probably no more than that. A couple of days and he should be all right.

“It’s County Hurdle here we come for Crooks Peak. He will get a penalty for this win and is probably going to go up more than that.” 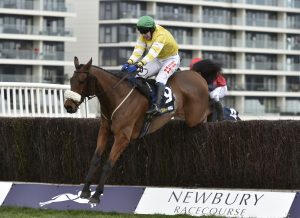 Carole’s Destrier loves a drama and after finishing strongly to snatch a late win in Newbury’s Betway Mandarin Chase in December, he did it again to land the William Hill Supporting Greatwood Veterans Handicap Chase.

The prize looked destined to be won by Theatre Guide who had strolled into what appeared an unassailable lead approaching the last but he hit the last fence hard, lost vital momentum and was run down by Carole’s Destrier who won by a length and a half.

“I told Tom Scudamore before the race not to get into a battle at the cross fence but when I was watching it live I wondered why I said that,” said trainer Neil Mulholland. “But finishing late is the way he likes it and thankfully it worked out.

Carole’s Destrier, who finished second in the 2016 Hennessy Gold Cup at Newbury, is entered in the Grand National but appears unlikely to make the cut.

“I think we would be very lucky to get into this year’s Grand National but there is a very good prize in the Midlands National at Uttoxeter and he could go there,” said the trainer.

Laughing Luis delivered a tonic for his owner and breeder John Sillett who has been admitted to hospital with an infection, with victory in the Awdry Bailey & Douglas Supporting Greatwood Novices’ Handicap Hurdle for Nicky Henderson and Ned Curtis.

Sillett managed Coventry City to win the FA Cup in 1987 and his wife Jean said: “He is called Laughing Luis after Luis Suarez. He used to bite as a baby.”

Huntsman Son will be considered for the Close Brothers Novices’ Handicap Chase at Cheltenham after his win in the BetVictor Novices Chase (for the Jacky Upton Trophy) on the eve of owner Bill Booth’s 93rd birthday.