Richard Hannon is set for a big debut season and the trainer has entered four of his stable stars, including the Classic-winning filly Sky Lantern and Sussex Stakes victor Toronado, for the Group 1 JLT Lockinge Stake on Saturday 17 May.

Just The Judge, who gave Charles Hills a first Classic victory in the Irish 1000 Guineas last summer, could renew rivalry with Sky Lantern. She was second to that one in the 1000 Guineas at Newmarket before twice more finishing behind the Hannon filly.

In total 21 horses have been given early entries for the showpiece and there could be a strong international presence with Mike de Kock’s classy duo Soft Falling Rain and Vercingetorix involved.

Aidan O’Brien has only won the JLT Lockinge Stakes once but the Irish trainer has entered a powerful hand with leading ex-US horse Verrazano, transferred to Ireland over the winter, a fascinating possible runner.

Top Notch Tonto made a big impression for the Brian Ellison yard last term, winning a Haydock Group 3 off a mark of just 95 before finishing second behind Olympic Glory at Ascot. The four-year-old could also line up and Hungerford Stakes victor Gregorian, Richard Fahey’s Garswood and 2011 Dewhurst Stakes winner Parish Hall are other notable entries.

Chief Executive, Julian Thick commented: “We’re thrilled to see such strong entries, including two from South Africa, for what is one of the best Group 1 races of the calendar. Red Evie in 2007 was the last filly to take glory in this but with four-time top-level scorer Sky Lantern potentially lining up, along with fellow Classic winner Just The Judge, that could change. It looks set to be a great contest and I’d like to thank JLT for their generous support.”

The JLT Lockinge Stakes was first run in 1958 and secured top-level status in 1995. Recent winners include the undefeated Frankel and Godolphin’s Farhh. Earlier this year JLT, the world-leading insurance brokers and specialists in enterprise risk management, extended its sponsorship of the race for another three years. 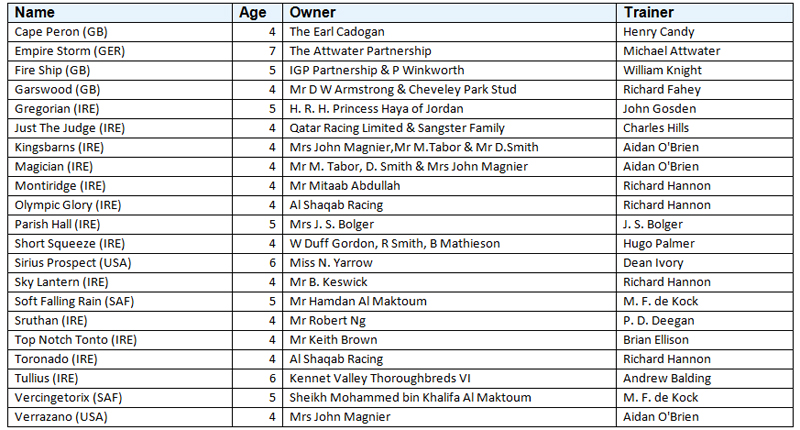