The five-year-old is set to clash with Champion Bumper third Wait For Me (Philip Hobbs/Richard Johnson, pictured below in blue) in the Events Bar Management Maiden Hurdle (1.15pm, 16 runners) over two miles.

Potters Legend scored easily on his debut at Fakenham in October and last time out found only the highly-regarded Ballyandy a length too strong in a Listed bumper at Cheltenham on November 15.

Trainer Lucy Wadham said today: “Potters Legend is very well. He has schooled nicely and we are looking for a nice introduction tomorrow. 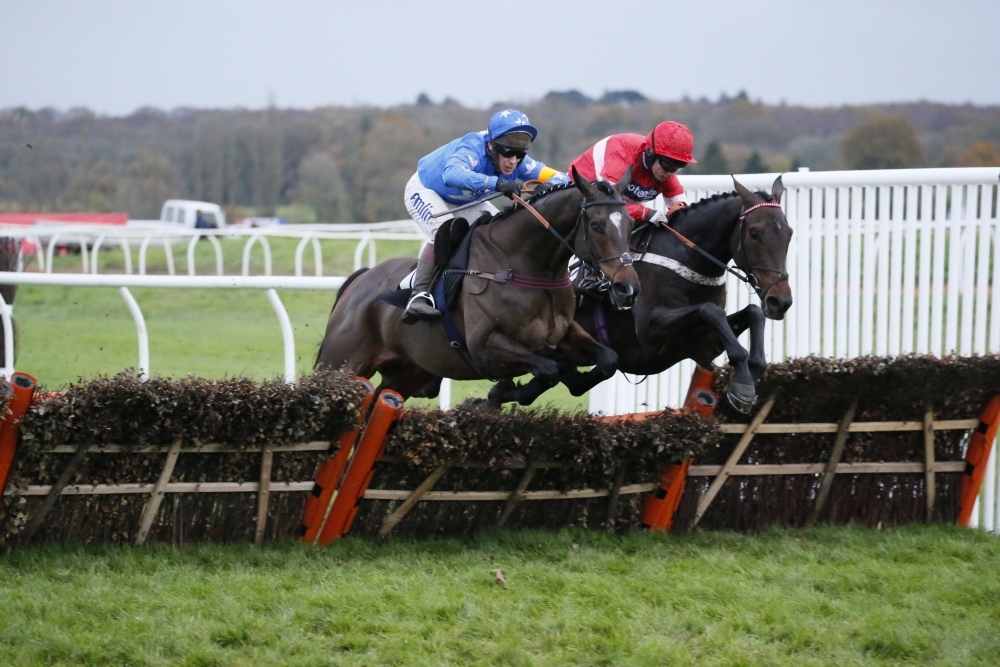 “We had him last year and always liked him, although it is probably fair to say we didn’t know he was this good. He is a tank and doesn’t look like a bumper horse.
“We were thrilled at Cheltenham. It looked like he might win it at the bottom of the hill and, although he couldn’t quite hold on, they think the winner is a real superstar.
“I think two miles is the right place to start. If he needs further, then we can step up but two miles at Newbury in the soft is going to be far enough on his first start over hurdles.”

Smart flat recruit Fire Ship (Brendan Powell/Richie McLernon) also makes his debut over hurdles in the same contest. The six-year-old captured a Group Three prize over a mile on the Flat at Deauville, France in August, 2013, when trained by William Knight and has a BHA Flat rating of 100.

Powell said today: “We have had Fire Ship for five or six weeks and he has settled in well.

“He is a gorgeous horse with a lot of ability. He has done plenty of schooling and is very sharp and quick
“The ground will be ideal for him, although the obvious question mark is stamina. If he settles like he does at home then he will give himself every chance. He has run mainly over a mile but did run a mile and a quarter at Newmarket two starts back. Graham Lee rode him and he stayed on up the hill.

“We will probably give him two runs over hurdles and if it works then great, but if not he will go back to William’s for a Flat campaign.”

Sausalito Sunrise drops back in trip after landing a valuable Grade Three handicap chase at Cheltenham, while O’Faolains Boy, winner of the 2014 RSA Chase at the Cheltenham Festival, is out to bounce back after pulling up on his return from injury in the Grade Two Amlin Chase at Ascot last month.

There will also be plenty of family entertainment at the racecourse, with an inflatable toboggan slide, a giant snowman bouncy castle and a snow globe photo booth amongst the activities on offer.

Tickets are available from www.newburyracecourse.co.uk and under 18s go FREE, making it a great opportunity for a family day out after Christmas.