Paul Nicholls is looking forward to Betfair Super Saturday this weekend with Dodging Bullets (pictured below) making his seasonal return in the Grade Two Betfair Exchange Chase at Newbury (February 13) .

The Somerset trainer, who hosted a media stable visit this morning organised by Betfair in conjunction with Newbury & Ascot Racecourses, is delighted with the horse.

He said: “Dodging Bullets, the reigning two-mile champion chaser, looks absolutely amazing – we are thrilled with him at the moment. It has been one of those seasons for us, with the injuries to him and several others – it has not been plain sailing.

“He was going to Cheltenham in November before we ran him in the Tingle Creek and the Clarence House but we schooled him one morning and two days later he was hopping lame. But for a week afterwards, we could not work out what was wrong with him. Then he threw an enormous splint so we had to give him a month stood in his box and treat it. He had lots of walking and bits and pieces as we waited for him to come sound again. 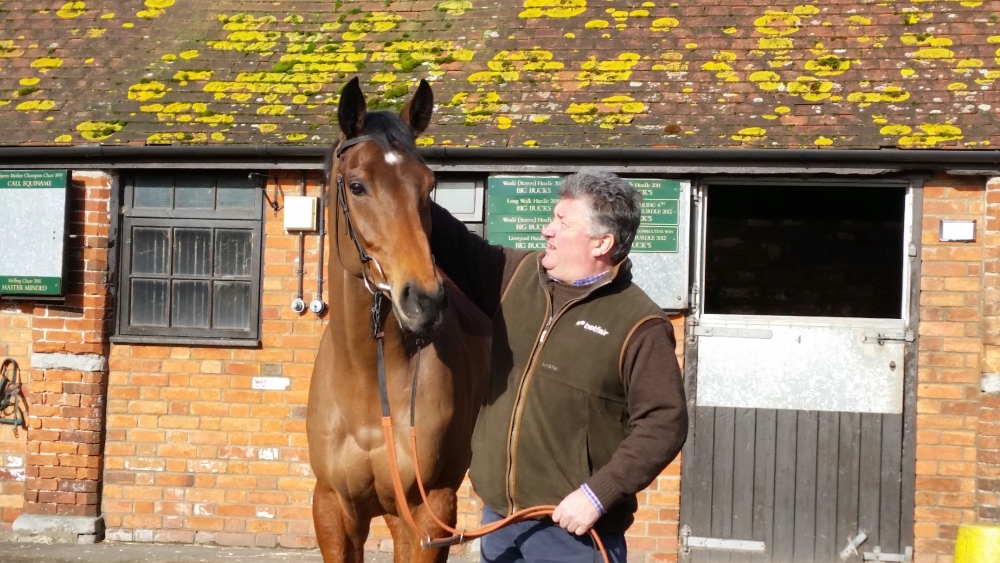 “For the last eight weeks, we have had absolutely no problems with him and he has had a racecourse gallop as well. So he is all ready to go on Saturday. He looks in great shape and is good in his skin. He has done loads of work and is fit enough to run really well on Saturday. But whatever he does, a race will make a big difference to him ahead of Cheltenham.

“Last year he needed his first run and then won three Grade Ones. He seems every bit as good as he was last season and we are very pleased with his work. I don’t think we have ever had him quite so fit and well going into his first race of the season. Of course, he will come on for the run – he has to – but I am happy he is in good enough shape to run tidy on Saturday. He should be at the peak of his powers now. Un De Sceaux will be the one to beat when defending his title at Cheltenham – we haven’t taken him on yet.”

Turning his attention back to Betfair Super Saturday at Newbury on February 13 and Britain’s richest handicap hurdle, the £155,000 Betfair Hurdle, he explained: “Modus has been one of the favourites for the Betfair Hurdle for a while. He was a good bumper horse – second in last year’s Champion Bumper and third at Punchestown.

“We bought him in the summer and sold him to J P (McManus). He won at Taunton first time out and then he won at Newbury, beating Charmix who won by 17 lengths next time. Last time, he was third over Christmas but the ground at Taunton that day got heavier, heavier and heavier – basically it was unraceable.

“He was very keen to start with but has settled now. He always loved his jumping, is a much more mature horse now and is getting better all the time. We like him a lot. The Betfair Hurdle is a good race for a novice as hopefully you might be well handicapped but in a year’s time you might not be.

“Whatever he does on Saturday, I think he will be better on some better ground later on. He can cope with the soft ground which will be the same for them all. He does lack a bit of experience but has always jumped very nicely. I think there is a lot of improvement to come from him – he is learning to settle – and is going forwards.

“The first part of this season, we have not been that hard on him as I wanted him to settle and learn our routine. He does all that now. We have done a lot of work since his last run and I am just very happy with him.

“Modus is obviously a high-class horse and we will see if he can win this big handicap. He will get two and a half miles in time but he is not slow – the testing ground will bring his stamina into play. I have no idea who rides him on Saturday – Barry (Geraghty) will have to make up his mind. He is a nice horse to have on the team. I bought him on spec and then sold him to J P. He is the sort of horse we do well with and from day one Modus has been an absolutely awesome jumper – he has loved it. He will definitely jump fences in time and will make a really smart two-mile chaser.”

Nicholls has a good record in the Betfair Denman Chase over three miles at Newbury, with eight wins to his name.

He continued : “Rocky Creek runs in the Betfair Denman Chase at Newbury on Saturday and this race has been his aim for a long time. He was second to Don Cossack in the Grade One at Down Royal in November and ran really tidy that day. He then went to Aintree and ran really poorly in the Grand Sefton Chase – we have fairly well worked out that he is not in love with jumping the Grand National fences.

“He always goes well at this time of year. Last year he won the big three-mile handicap chase at Kempton and he has such a high handicap mark now of 160 that I thought it would be nearly impossible to run in that race again, hence the Betfair Denman Chase bid.

“He is a good solid staying chaser. He is also in the Cheltenham Gold Cup but is very unlikely to run in it as there are other races for him. Saturday’s race is ideal for him as it is a valuable prize (£50,000) and he does like Newbury. He is a definite runner whatever the ground.” (Pictured below). 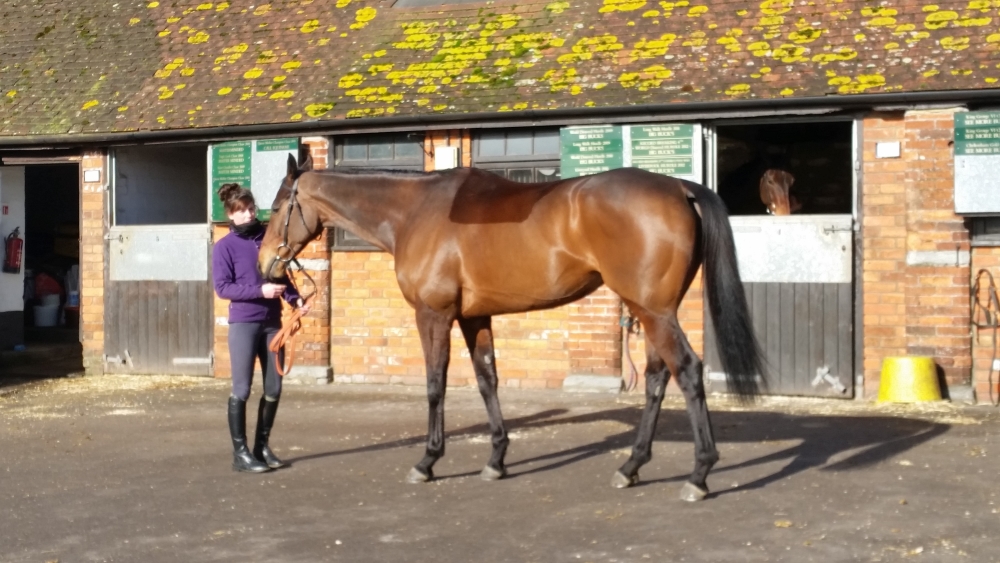 Nicholls highlighted another horse due to run on Saturday: “Emerging Talent is a young horse who is in the opening novice hurdle on Saturday at Newbury (the Read Paul Nicholls Exclusively at Betfair Novices’ Hurdle, 1.20pm). He will probably run.

“He won at Exeter on New Year’s Day and previously ran in the Persian War Novices’ Hurdle at Chepstow where he started favourite and disappointed in third. He went straight off to have a breathing operation after that and won very nicely in heavy ground at Exeter.

“He is a big strong chasing type, who will go chasing next season, and we will try and win some more novice hurdles with him. He is unlikely to go for the Cheltenham Festival unless it is one of the handicaps.”

Finally, the champion trainer, who is leading in the battle for the title again, highlighted Capeland.

He declared: “Capeland won the Listed bumper at Cheltenham on New Year’s Day and runs in another one at Newbury. He is a four-year-old by Poliglote and has had two runs. He won a bumper in very soft ground last spring in France and we brought him over.

“I did not want to really go hurdling with him yet as we have so many four-year-olds. We thought he would be better for next year so we kept him for that bumper which he won nicely. He had been quite keen at home so we dropped him in and nearly gave him a bit too much to do. We will make more use of him on Saturday.

“The ground will suit him, the only problem is that he has a 4lb penalty. I suspect Saturday will be his last run of the season. He will then go novice hurdling next season – he jumps brilliantly – and should being a nice staying chaser. He will be a horse to follow.”

Betfair Spokesman Barry Orr commented today: “Betfair Super Saturday is shaping up to be a fantastic day of National Hunt racing and with Paul Nicholls waxing lyrical about the rude health of reigning Champion Chaser, Dodging Bullets, 1/2 looks about right, especially when you factor in the uncertainty around the participation of potential opponents.

“The Betfair Denman Chase is another fascinating contest and Splash Of Ginge, returning to the scene of his greatest victory, has already been supported at 14/1.”

The going at Newbury is currently Heavy, Soft in places.