His comments about five contenders for the £155,000 Betfair Hurdle, Britain’s richest handicap hurdle, and Altior, making his comeback in the G2 Betfair Exchange Chase, can be found below.

Synopsis – Nicky Henderson is the most successful trainer of all time in the Betfair Hurdle with five victories.

Elsewhere on the Betfair Super Saturday card, Henderson’s star two-mile chaser Altior is set to make his comeback, following a wind operation, in the Betfair Exchange Chase over two miles.

Background – The son of financier and amateur jockey John Henderson MBE, who founded Racecourse Holdings Trust, the forerunner for Jockey Club Racecourses, he was educated at Eton and the Royal Agricultural College.

He worked for stockbrokers Cazenove in London and Australia, where he gained experience riding work at Randwick, before devoting himself full-time to racing.

Henderson first made his name in Britain as an amateur rider, finishing runner-up three times in the non-professional championship. His main wins as a jockey came on Happy Warrior in the 1977 Fox Hunters Chase at Aintree and on Acquaint in Sandown’s Imperial Cup in the same year. Henderson recorded his 78th and final win on Rolls Rambler in the Horse & Hound Cup at Stratford in June, 1978.

He became assistant trainer to Fred Winter in 1974 and received his own training licence in July, 1978, taking over from Roger Charlton at Windsor House Stables in Lambourn, Berkshire. He moved to Seven Barrows, to the north of the village, in 1992, after swapping yards with Peter Walwyn.

He was made a Lieutenant of the Royal Victorian Order in the 2018 New Year’s Honours List, reflecting his role as principal Jump trainer to the late Queen Mother and Her Majesty The Queen. 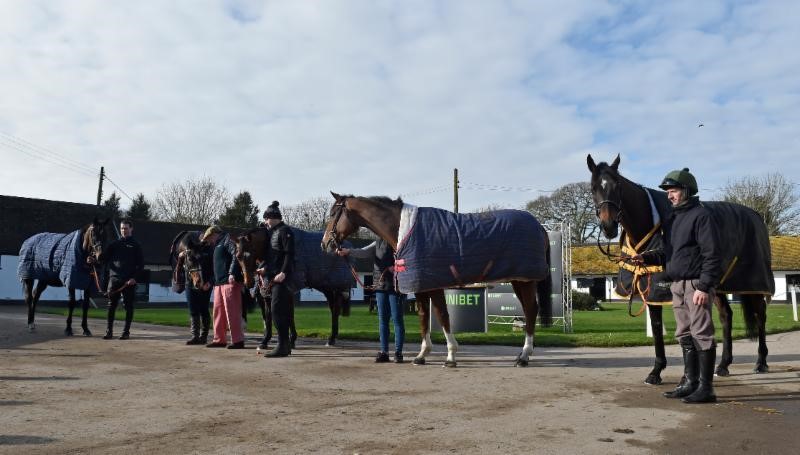 Verdana Blue (11st 9lb)
Born: April 2, 2012
Breeding: b m Getaway (GER) – Blue Gallery (IRE) (Bluebird (USA))
Owner: Crimbourne Stud
Form: 6/0214U1143-513
*Stayed on strongly to take third behind Hunters Call in a two-mile G3 handicap hurdle at Ascot on December 23, having won a handicap hurdle in good style over the same course and distance on November 24 despite being hampered at the first flight.
*Fourth in G2 Trull House Stud Mares’ Novices’ Hurdle at Cheltenham in March.
*Has won three other races – two novices’ hurdle and a bumper.

Nicky Henderson commented: “The intention is run all five of my Betfair Hurdle entries. I am going to have a competition in the yard about the order they finish in on Saturday just for fun.

“I wouldn’t want to put them in order – I think they are all in good form – they all did a little bit of sharper work this morning – four of them went together. It did not tell me which was better, rather they are all well.

“If anything works very well, it is Verdana Blue. And she is in the Champion Hurdle and apparently she is going to win it too (according to her owners).

“She loves a good pace and is a two-miler only – she does not want to be in front too long.  She is a very good filly on fast ground.”

Nicky Henderson commented: “He ran a good race at Newbury the first time this season. I think the ground is important to him. It might be a worry if we got a lot of snow and the ground turned very soft. But his work is excellent.”

Nicky Henderson commented: “Jenkins was very sharp in his work on Saturday – he doesn’t work in blinkers normally. He did work once in blinkers, but it did not seem to make a great deal of difference at the time. But it certainly seems to on the racecourse.

“He was very keen in the Ascot race over 2m 3f – I was worried early on that he was doing too much. But it did not stop him coming home well – I was very impressed.

“None of the riding arrangements have been talked about yet, but James Bowen is most likely to ride Jenkins. The horse has 11st 12lb and the obvious thing is to claim 3lb, especially as James has won on him.

“The horse has gone up a fair bit and James’s allowance has gone down since Ascot so we have lost 2lb there.

“It looks like Jenkins will be quite prominent in the race – he is enjoying it up the front at the moment and that is probably half the secret to him.”

Nicky Henderson commented: “I think she has a great chance.

“She has her own issues, particularly with muscle enzymes. It is sort of a filly thing – though it affects geldings as well.

“She always struggles with it and we have to do very odd things to make sure she is OK. We did her blood yesterday and it has never been better which is very pleasing. I have never had her muscle enzymes more under control than they are now.

“She is a very talented mare and has started this season well. She needed her first run and was very good the second time.

“She might lack a bit of experience, but she doesn’t really – she is a very slick jumper. She will probably go to the mares’ hurdle at the Cheltenham Festival. She is a good filly.”

*Another lightly-raced sort. Beaten three lengths by London Prize when second on reappearance in G2 Elite Hurdle at Wincanton in November.
*Won on two of his four starts in novices’ hurdles last season,

Nicky Henderson commented: “I like Lough Derg Spirit – I think he ran a very good race in the Elite Hurdle and we just haven’t been anywhere since.

“The Betfair Hurdle has always been the objective – his work has been great – he works very well.

“He is very talented – he had the pace to win at Musselburgh, and is probably a better horse on good ground, though he ran a very good race at Wincanton in a bog. He is very fit and very well.

“We have won the Betfair Hurdle a few times and we have good chances, but I cannot think of ever going into the race with five and no dead wood.

“This is the biggest of the two-mile handicaps and all the owners are keen to go. I think all five have good chances, but then there are 20 others saying the same thing.”

Betfair’s Barry Orr commented: “Lalor and Jenkins are our joint-favourites for the Betfair Hurdle at 8/1. Out of both of them at the top of the market, we’ve seen more money for Jenkins.

“We’ve also had good support for Gary Moore’s Knocknanuss at 14/1. Nicky Henderson has five runners in the Betfair Hurdle and Lough Derg Spirit is strong in the market at 12/1.

“We also go 7/4 that Nicky Henderson saddles the winner of the Betfair Hurdle.”

Special: Nicky Henderson to train the winner of the Betfair Hurdle – 7/4 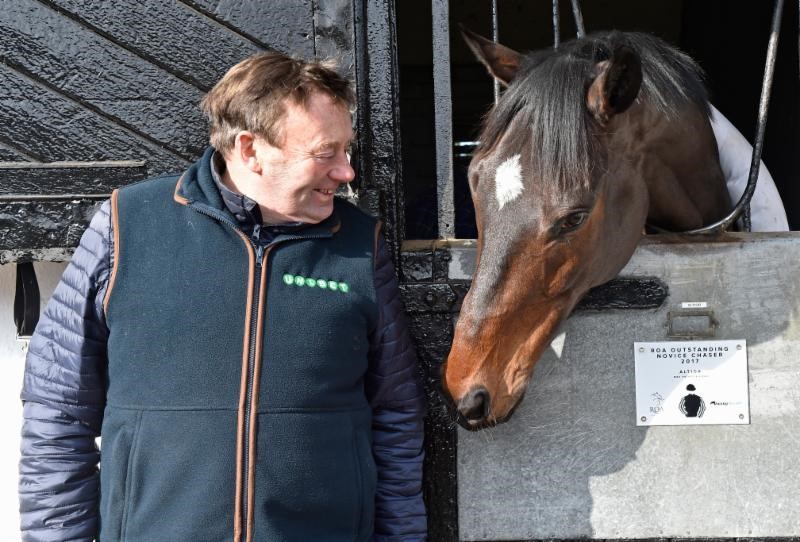 *Unbeaten on his last 11 starts.
*His only two defeats in 14 outings came in bumpers.
*An impressive seven-length winner of the G1 Supreme Novices’ Hurdles at the Cheltenham Festival in March, 2016.
*Three-time G1 winner over fences – the Arkle Trophy at the Cheltenham Festival in 2017, plus the Henry VIII Novices’ Chase and the Celebration Chase, both at Sandown Park.
*Off the track since April, 2017. Had a breathing problem in November when being prepared for the G1 Betfair Tingle Creek Chase at Sandown the following month and this has required wind surgery.
*A 13-length winner of the G2 Betfair Exchange Chase in February, 2017, he would become the fifth dual winner of the two-mile Newbury contest following on from Waterloo Boy (1992 & 1993), Viking Flagship (1994 & 1996), Azertyuiop (2004 & 2005) and Master Minded (2008 & 2010).

Nicky Henderson commented today: “I think Altior is going to run at Newbury on Saturday (in the G2 Betfair Exchange Chase), though I am not going to promise.

“I did want to get another school into him. He schooled last week and was fantastic, but he was nearly too fantastic. He needs to do it again to take that freshness out of him – he was so fresh that he wanted to murder them.

“We weren’t able to school him today (because of the frosty conditions) and I suspect we won’t be able to do so tomorrow.

“I am not saying I am not going to run him because I cannot jump 10 fences with him, because he was brilliant last week. He is just very fresh. He went 10 furlongs on the grass this morning and he was in great form.

“I would buy another week – I really would, but the only danger is, because he is so talented, the work is too easy for him.

“We are lucky – we have got a lot of good horses, but he can chew them up a bit!

“I have to be realistic about this – I would like to get a race into Altior – if he gets beaten, he gets beaten. He is going to get beaten one day. I hope he doesn’t.  I am not being down on him – his work is fantastic. His wind is fantastic, his jumping is fantastic – all in all he is just in great form and in excellent shape.

“He is working as well as he ever did – the frightening thing is how good he is – he is just a very, very, very, very good horse. He has won the Supreme Novices’ Hurdle, won the Arkle and he is unbeaten over obstacles.

“We are all excited to have him back. The Champion Chase is what we need and it is just finding the right route in. We are all happy that he is pretty ready to go – we took his blood this morning and that will have to come up all right. All being well, we are looking forward to running at Newbury on Saturday.

“He is coming into a competitive race against fit horses – that is the danger. The competition will be as strong as in March.

“The best way to prepare for Cheltenham is for him to race on Saturday – the timing is good – four and half weeks between races.”

Star chaser Altior is on course for his first start of the campaign in the £50,000 G2 Betfair Exchange Chase (3.00pm, seven entries) over two miles, having undergone a wind operation after a breathing issue in November.

Altior, (the 8/13 favourite with Betfair) is unbeaten in 11 races over obstacles and ended last season with an impressive victory in the G1 Celebration Chase at Sandown Park in April, in which he defeated Queen Mother Champion Chase hero Special Tiara by eight lengths.

In Altior’s absence, Politologue (Paul Nicholls, 11/4) has asserted himself over the rest of the two-mile chasing division with a hat-trick of victories in the G2 Haldon Gold Cup, G1 Betfair Tingle Creek Chase and G2 Desert Orchid Chase.

The eight-year-old captured this race last season before finishing third in the G1 Cheltenham Gold Cup in March.

Richard Osgood, Newbury’s Clerk of the Course, said: “At the moment we are Soft, Good to Soft in places. The frost covers went down yesterday all over the course and we are just doing a few extra bits around the track. What we did yesterday made sure that the racing track was covered.

“The frost covers mean we could down to as low as -4 or even -5 Celsius. Since we’ve put the covers down, we don’t think the temperatures are going to be as bad as that.

“It’s going to be -2 or -3 tonight and possibly tomorrow. Thursday night, they are talking about it being pretty much frost free so I can’t see there being much of a difference to the track conditions.

“Betfair Super Saturday is living up to its billing.”