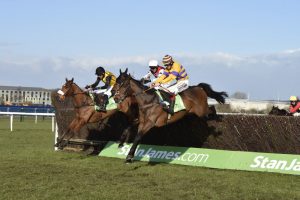 Nicholls has engaged Dolos, a winner at Sandown at the start of the month, Grand National entry Warrior’s Tale, a winner on this card two years ago, and San Benedeto in the £50,000 Grade 3 contest of which he was won eight times of the last 13 runnings.

There are 26 five-day entries for the 2m4f race which has also attracted the Venetia Williams-trained Calipto who won the Listed Swinley Chase at Ascot last time out.

The Greatwood Gold Cup is the final Class 1 chase before the Cheltenham Festival which Nicholls last captured in 2016 with Sametagal, while his best-known winner was Pacha Du Polder, two-time winner of the Foxhunter Chase at Cheltenham, in 2013.

Nicholls said: “It’s a valuable race and at the right time of year when you want to be running horses in it. Dolos has no entries at Cheltenham nor San Benedeto and Warrior’s Tale is going to Aintree so I have no worries about running any of them before Cheltenham.

“I entered them all to have a look at the field, see what the ground does and then we will make a plan as to what to run.”

The race could also be a target for Molineaux, the Colin Tizzard-trained novice chaser who runs in the Thistlecrack colours of John and Heather Snook.

Tizzard said: “He got beat at Exeter on Friday. When he went into the fog four out he moved up behind up Captain Cattistock and when he came out I thought he would be five lengths clear, but he wasn’t.

“We’ve entered him as he probably won’t get in at Cheltenham off 131. It won’t hurt to run him again quickly as he is probably that sort of type and it hasn’t hurt Vision Des Flos running three times in a month.

“Sometimes this time of year on better ground you can do it and he will probably run this weekend. The idea is if he wins at Newbury it will get us in at Cheltenham.”

The Grade 3 William Hill Supporting Greatwood Gold Cup is the feature race of Greatwood Charity Raceday on a seven-race card of which the fourth race will be run in memory of the late Michael Yeadon, co-founder of Greatwood, who died on 19 February 2019 after a long illness. Michael was a life-long lover of horse racing, and it is for this reason that along with his wife Helen, Greatwood Charity came into existence 21 years ago.