Grand National contender Seeyouatmidnight (Sandy Thomson/Danny Cook, 11st 12lb, 7/2) came down from Scotland to race as top-weight in the £20,000 Doom Bar Handicap Chase (3.50pm) over two and a half miles.

The 10-year-old, off the track since contesting at handicap hurdle at Kelso in March, 2017, led or disputed the running for much of the way before eventually finishing third, beaten 20 lengths, behind the well-backed Tiquer (Alan Jones/Tom O’Brien, 10st 10lb, 9/1).

Seeyouatmidnight pleased connections and is now qualified to run in the Grand National over four and a quarter miles and 30 fences, at Aintree on April 14.

Please find below reports from the four main contests below.

Trainer Tom Lacey is in the form of his life, gaining his seventh winner from 10 runners in the last fortnight when Thomas Patrick won well at 5/1 by eight lengths from the fast-finishing 7/1 chance Dawson City (Polly Gundry/Andrew Thornton), with the grey Lower Hope Dandy (Venetia Williams/Charlie Deutsch) third at 16/1 despite a bad mistake at the second fence.

Thomas Patrick, a six-year-old by Winged Love, had finished fourth to Dawson City in the 3m 6f Devon National at Exeter on his previous start, but reversed the placings decisively after leading for most of the way.

Champion Jump jockey Richard Johnson, enjoying his 157th winner of the season, had him in front after the second obstacle until the seventh before going back into the lead at the 13th.

He was challenged by three out by the eventual third but rallied and went clear to win in great style. The gambled-on Bells ‘N’ Banjos (Fergal O’Brien/Paddy Breenan), 5/1 from a morning price of 14/1, finished last of the seven finishers.

Lacey, based in Herefordshire, was delighted with Thomas Patrick’s victory off a rating of 131.

He said: “It is a stellar patch – I don’t think there is any real reason except the horses are healthy and happy and running well. I am very lucky.

“Thomas Patrick jumps fast and accurately and any horse in behind making a mistake was being punished for it with him jumping so well out in front.

“We were joking beforehand – I said to Richard I don’t think Thomas Patrick was necessarily happy being on the inner in the Devon National so give him a bit of room and ride him like Native River (last week’s Cheltenham Gold Cup winner).

“As soon as the ground dries up, we will rough him off and give him a good summer. I am not sure he did not stay in the Devon National as he got a very nasty over-reach on his near fore and I think that stopped him as much as anything.

“We will possibly have to think about the Ladbrokes Trophy (Newbury’s Jump racing £250,000 highlight on December 1) next season. I will have to look through the calendar and see what there is for him.

“He probably does not want extremes of ground – today’s going is genuine soft ground and that is ideal.”

There was a terrific battle between 11/10 favourite Oistrakh Le Noir, trained by Ben Pauling in Gloucestershire for owners Simon Munir and Isaac Suede, and 13/2 shot Mister Chow from Gary Moore’s Sussex stables. They both carried 11st 9lb.

Oistrakh Le Noir appeared to be cruising all the way up the straight for his rider Daryl Jacob and had just taken the lead before the last with the valuable race seemingly at his mercy.

However, the four-year-old hurdler, a winner of two of his first four starts, made a bad mistake and forfeited the advantage to the Joshua Moore-ridden Mister Chow.

Oistrakh Le Noir could not close the narrow gap between them despite trying hard and it was Mister Chow who held on by a half-length, with the pair well clear of the third Phoenix Dawn (Brendan Powell/Brendan Powell jnr, top-weight 11st 12lb, 16/1).

“His last race (at Haydock in which he finished sixth after winning at Warwick) was run funny – a very stop-start contest. He was very free early, his jumping wasn’t very good and I don’t know if he travelled away from home that night, so it was a whole multitude of things.

“He is probably better handicapped on the Flat off 70 and they cannot put him up either! If he comes out of this race well, he is probably best off going back to the Flat if the ground stays like this.

“Mister Chow switched off beautifully today and Josh said he was too asleep going past the stands. He picked up lovely all the way down the back.” 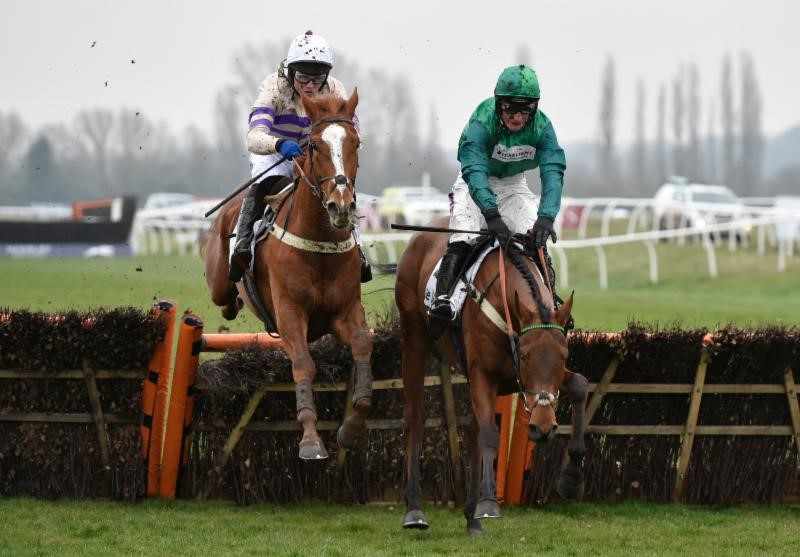 The 16-runner Finale was fiercely competitive and there were plenty still in with a chance approaching entering the straight.

Top-weight Midnight Tune (Anthony Honeyball/Aidan Coleman, 11st 10lb, 11/1) led for a long while but started to drop out of contention after straightening up.

Kalahari Queen (Jamie Snowden/Gavin Sheehan, 11st 1lb, 12/1) led three out but made a mistake at the next where Roksana (Dan Skelton/Bridget Andrews (3), 11st 2lb, 9/1) went second before leading at the last and running on well to score by two and three quarter lengths.

Bridget Andrews, who gained her first Cheltenham Festival winner earlier this month, took over from her boyfriend Harry Skelton in the saddle after he failed to pass the doctor at Newbury today and claimed a valuable 3lb off Roksana’s original weight of 11st 5lb.

She reported: “Unfortunately, Harry did not pass the doctor and luckily the owners kindly let me ride her.

“Roksana is quite a decent mare I think. We really liked here and this race was always the aim. We campaigned her quite lowly with a couple of easy novice hurdles and she has come through them well.

“Actually, she travelled through the race a little too well – carting me around. I was thinking that we were going to fall in a hole because she had done way too much, but she was so tough and, after the last, there was no catching her.

“The ground was fairly testing, but she didn’t seem to mind. She is a proper, proper horse.

“She is going to stay further in time and she is big enough to jump a fence. She will be sent to stud at some point, but I think she can go a long way on the racecourse.

“Harry does not mind if I get on his horses, but I think he finds it hard when someone outside the yard rides them. He has taken it pretty well, but how he is going to continue to take it until he gets back we will have to see.

“It was an unbelievable day to win at Cheltenham – a day I will definitely never forget and I am so grateful for the whole team for believing in me and supporting me.”

The most valuable race of the afternoon provided jockey Noel Fehily with his 100th success of this season and he rode a canny race on the 5/2 favourite Caribert, who is trained by Harry Fry in Somerset.

He had the five-year-old son of Ballingarry in front from the outset, initially setting a steady pace.

The experienced jockey quickened the tempo turning for home and saw off a series of challengers in the straight, the final one coming from the filly Hotter Than Hell (Alan King/Brendan Powell jnr, 25/1).

Caribert stayed on strongly to win by two and three quarter lengths, with another seven lengths to the third Benny’s Bridge (Fergal O’Brien/Paddy Brennan, 7/1).

Fry commented: “Caribert gave quite a lot of weight away to the runner-up and then there was seven lengths back to the third, a previous winner like us, so the form looks solid.

“He is not really a natural front-runner but Noel just thought we would use his experience – we know he gallops and stays. There is no better man than Noel to dictate things from the front and wind it up accordingly.

“We have always like this fellow but we thought the wheels had fallen off when he was beaten into second at Exeter. But it was a very smart winner we were runner-up to and he has subsequently gone and won under a penalty too. It is solid form.

“Caribert is not really a bumper horse – he is a great big chaser in the making. We thought we would bide our time – he is only five and will go novice hurdling next year.

“We will look forward to fences in due course. This is a good valuable race and we thought, having won it last year (with Bullionaire) for the same connections, we would try and do it again.

“Thanks go to Goffs UK for putting up the prize fund. We will try and find one for next year!” 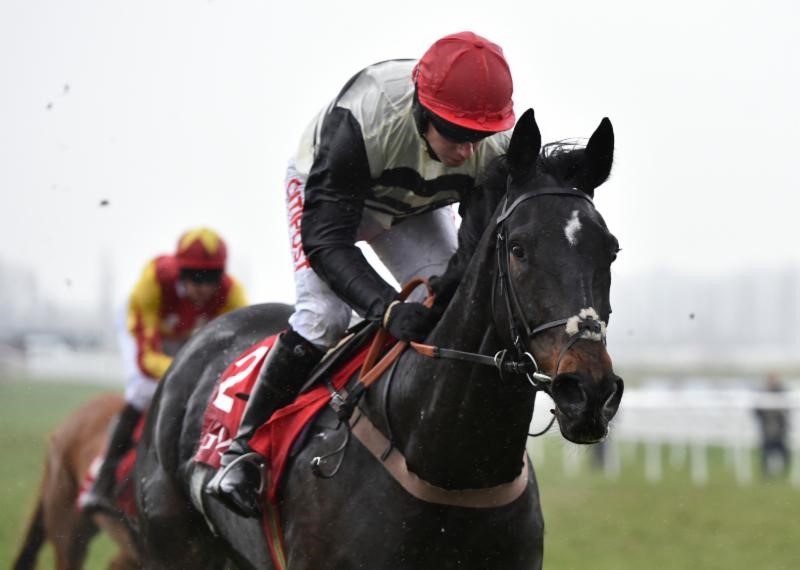 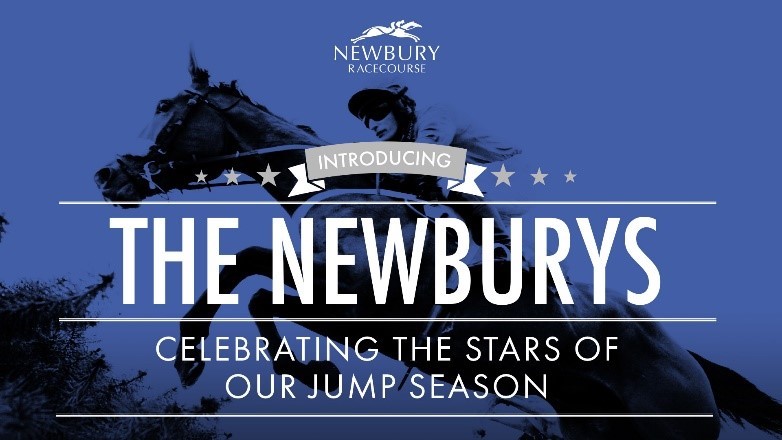 At the end of another successful season of Jump racing at Newbury, the racecourse paid tribute some of those who have lit up the campaign with starring performances with the introduction of their own version of end-of-season awards, “The Newburys”, in association with Be Wiser, on Saturday, March 24, 2018.

During the afternoon’s action, the winning-most owner, trainer, jockey and conditional jockey during Newbury’s 2017/18 Jump racing season were all recognised.

“It’s been at times a long, cold, wet, snowy winter, but it’s always been great fun,” said Henderson, after receiving his award. “We go back at Newbury to the Ladbrokes Trophy in which Whisper was so narrowly touched off, but what a great meeting that was – a huge success.

“The other great thing to be involved with was Newbury’s Trials Day (Betfair Super Saturday) in which we had both Altior and Native River coming back after a difficult winter.

“I was very grateful to Newbury for allowing us to come here and bring a few horses before the Ladbrokes Winter Carnival and work them. It helped us enormously as Buveur D’Air can get as fat and unfit as me. There was a good crowd, it helped us and if people want to come and see them that’s terrific.

“The groundstafff and the clerk of the course, Richard Osgood, have done a great job all winter in quite testing circumstances with all of the snow and everything.”

Fergal O’Brien and Poetic Rhythm’s owners The Yes Wait No Sorries were presented with a special cake and a bag of carrots for the horse – the yard’s staff will also enjoy a VIP hospitality box at one of the course’s summer Flat evening fixtures.

“When I started training, I wanted to be known for winners rather than cakes, but I’ll settle for this,” said O’Brien. “We got 46% of the vote because we were very aggressive on social media – I actually voted for Kalashnikov – but it’s great to remember what was an important day for us with a special horse in Poetic Rhythm.”

Moment of the Season – Fergal O’Brien’s first Grade One success as a trainer with Poetic Rhythm in the Betfred Challow Hurdle.

This award was based upon more than 1,000 votes and the winner received 46% of the vote.

A final prize was also awarded to yard who has won the most Best Turned Out awards over the course of the season, backed by the West Berkshire Racing Club, which was won by the staff of Lambourn trainer Oliver Sherwood.