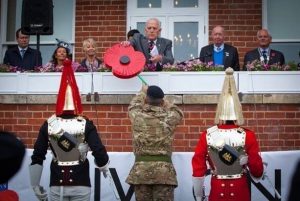 In keeping with the 100-year anniversary of the end of the first World War and 100 years of the RAF, the day will be filled with military activity and entertainment for everyone to enjoy. Once again, Newbury will be offering free entry for all members of the Armed Forces, Ministry of Defence and Royal British Legion, booked in advance.

As is now the custom, one of the highlights of the afternoon will be the launch of the Royal British Legion’s Poppy Appeal for West Berkshire and Vale of White Horse, which this year will see the delivery of the ceremonial poppy by a Scout Helicopter from the Historic Aircraft Flight team ahead of racing accompanied by the band of the 7 Rifles.

The Racecourse itself played a role in both World Wars, most notably when it was requisitioned by the War Office in August 1914 for use as an internment camp for prisoners of war. Civilians from enemy nations, known as “aliens”, were billeted in the stables alongside wounded German officers. It was used again during the second World War as a training ground and prisoner of war camp. 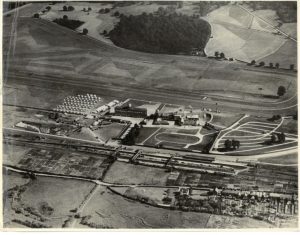 Newbury Racecourse was used as a training ground (pictured above)

Local secondary schools have been busy compiling art displays for the occasion which can be found on the first floor of the main Grandstand and where all racegoers will have the opportunity to take part in an art workshop to paint their own poppy canvas, courtesy of Brush Party.

The return of Homefront History will see vehicles and volunteers who will be taking part in re-enactments and tableaus whilst dressed in vintage uniform and provide racegoers with an insight into what life in the Armed Forces has been like throughout the years. The Royal Engineer, Royal Navy and Household Cavalry will also be on hand to talk to racegoers with the band of the 7 Rifles rounding off the afternoon with a sing-along in the Grandstand Enclosure.

Harriet Collins, Head of Communications at Newbury Racecourse commented: “Armed Forces Raceday has become increasingly popular since it was first introduced back in 2008 and is now a brilliant finale to the flat season here. Not only is it a great opportunity to appreciate the efforts of our Armed Forces personnel and support the work of the Royal British Legion, it’s a great afternoon for all the family to enjoy. With 2018 marking 100 years since the end of the first World War and the Racecourse’s use as a Prisoner of War camp in 1914, we will be marking the occasion throughout the afternoon.”

Free Premier Enclosure tickets for Armed Forces Personnel past and present must be booked in advance on 01635 40015 (Maximum of 2 allocated per Military ID number/MOD Civil Service ID Card/RBL Member).