Local trainer Jonathan Portman saw a long-term plan come to fruition as Mrs Danvers (above) gained a decisive victory in the £250,000 Weatherbys Super Sprint (4.10pm), as a crowd of  19,760, a record for this fixture beating the previous highest by almost 5,000, attended Simply Red on Weatherbys Super Sprint Day at Newbury on Saturday, July 16.

The two-year-old grey filly, 9/2 joint-favourite for the five-furlong feature following a pair of victories on soft ground, revelled on the good to firm going as she took up the running over a furlong from home before forging clear to score by a length and a quarter under Luke Morris in 1m 1.19s.

Mrs Danvers, by Hellvelyn, cost just £1,000 when bought in at Tattersalls Ireland Ascot Sale in February, meaning that she was allotted joint bottom-weight of 8st for the Weatherbys Super Sprint, with the weights of runners being decided by their auction price. She won £122,925 for her connections and is unbeaten now in three starts.

Portman, who trains in Lambourn, explained: “It’s lovely when a plan comes off – this was the plan in February and here we are. The plan was here and then to come back to Newbury next month for the Listed Bathwick Tyres    St Hugh’s Stakes (August 12).

“People will tell me to run in a Group race now but there is plenty of time for that when the ground gets softer. She has got the action for the faster ground and it’s fantastic.” 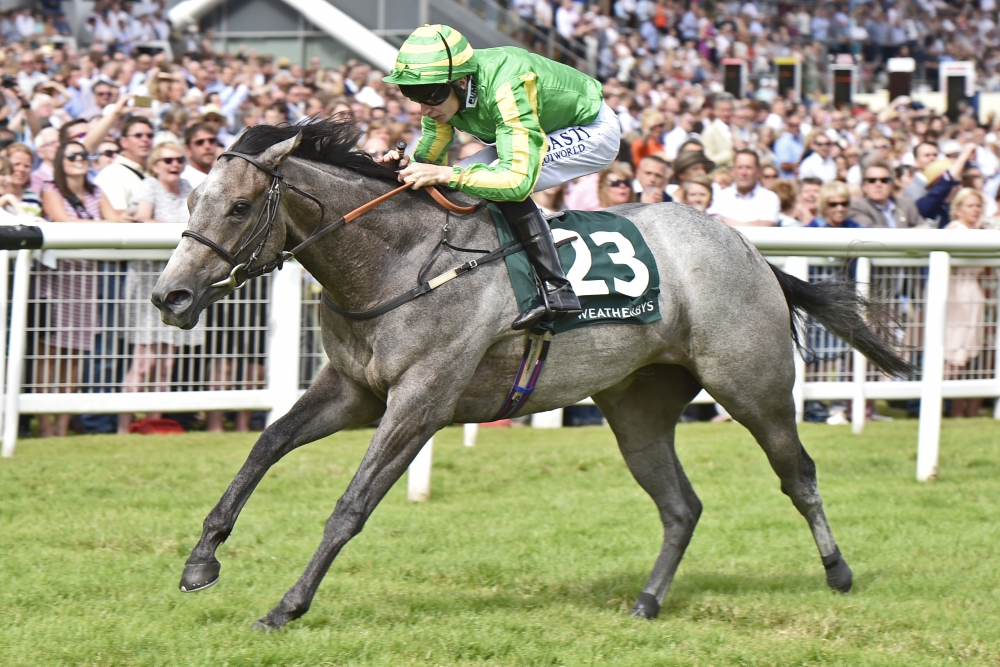 Morris added: “Mrs Danvers got a lovely tow down the middle and put the race to bed nicely. I probably got there a bit sooner than ideal and she wasn’t doing a great deal in front.
“She is equally as good on quick ground and I would be disappointed for connections if she wasn’t a black-type filly.”

Weatherbys director Nick Cheyne, who is also a member of the Turf Club syndicate that part-owns Mrs Danvers, said: “The Turf Club have half a dozen horses in training this year and I told Jonny Portman a few months ago to find us a nice horse and that we would like to lease it with him.
“Jonny rang me and said that he might have found a lovely filly but he wanted two weeks to give her a bit of work and then he would know whether she was good enough for us. You can’t get better than that from a trainer and, when he rang us back, we took 50 per cent of her.

“There are over 1,000 members of the Turf Club, but only around 90 of them are in the syndicate, so it is very exciting for everybody. Jonny is now going to have to speak at our next dinner because he is a very wry, amusing man. He is a fantastic trainer and great fun to have a horse with.”

Elsewhere on the excellent card, The Tin Man (above) emulated his half-brother Deacon Blues when providing Newmarket trainer James Fanshawe with a second victory in the space of five years in the day’s other feature race, the £60,000 Group Three bet365 Hackwood Stakes (3.35pm) over six furlongs.

The four-year-old, eighth in the Group One Diamond Jubilee Stakes at Royal Ascot, bounced back to form under a confident hands and heels ride from Tom Queally, who held up  the 11/4 favourite at the rear before scything through the field to cosily beat 20/1 chance Divine (Mick Channon/Frederik Tylicki) by a head.

Fanshawe said: “I am really relieved because this horse has got enormous talent and he had an interrupted preparation going into Royal Ascot. After the disappointment there, we decided to come here rather than go for the July Cup (Group 1, Newmarket last weekend).

“We were worried about the ground being too quick today and Tom was brave, but that is his style. The Tin Man has to be ridden like that because he switches off and then really quickens up well – he has a great turn of foot.

“Tom said before that he would be nearer last than first for the first three furlongs and that is what the horse likes. If he gets going early, he gets a bit keen, but he is really useful when ridden that way.

“Tom felt he almost got there too soon today, so The Tin Man could do five furlongs. His dad (Equiano) was very good over five and his brother Deacon Blues won over five.

“So you wouldn’t discount the Nunthorpe Stakes at York but I have Haydock and the Champion Sprint at Ascot in my mind, with possibly a race in Ireland in three weeks’ time beforehand.

“York is tempting – it’s a great race to have a go at, so we will see how he comes out of the race.

“It’s a great tribute to my wife, who put the syndicate together. She’s happy, so I will be in her good books for a bit!”

Queally added: “It was well documented that things didn’t go to plan on The Tin Man’s last start. I said that I was going to ride him with a lot of balls today as he needs to be filled with confidence.

“I think he is a different gear when he is on form and I have huge aspirations for him going forward. He wasn’t disgraced on Champions’ Day last year and we had our excuses last time.

“He won as cosily as I have ever won a sprint of that calibre. I would like to think that, if he can take any little step forward, he will be a force to be reckoned with.”

A trip to Australia could be on the cards for Scottish, who outclassed his rivals with an authoritative display under James Doyle in the Listed bet365 Stakes (3.00pm).

The Charlie Appleby-trained four-year-old was the hot 10/11 favourite for the 10-furlong contest and did not give his backers a moment of doubt as he made all to score by a length and three quarters over Berkshire (Paul Cole/Jim Crowley).

Appleby commented: “Scottish has had a lovely trip round today and has enjoyed himself. He travelled nicely and picked up well when asked. 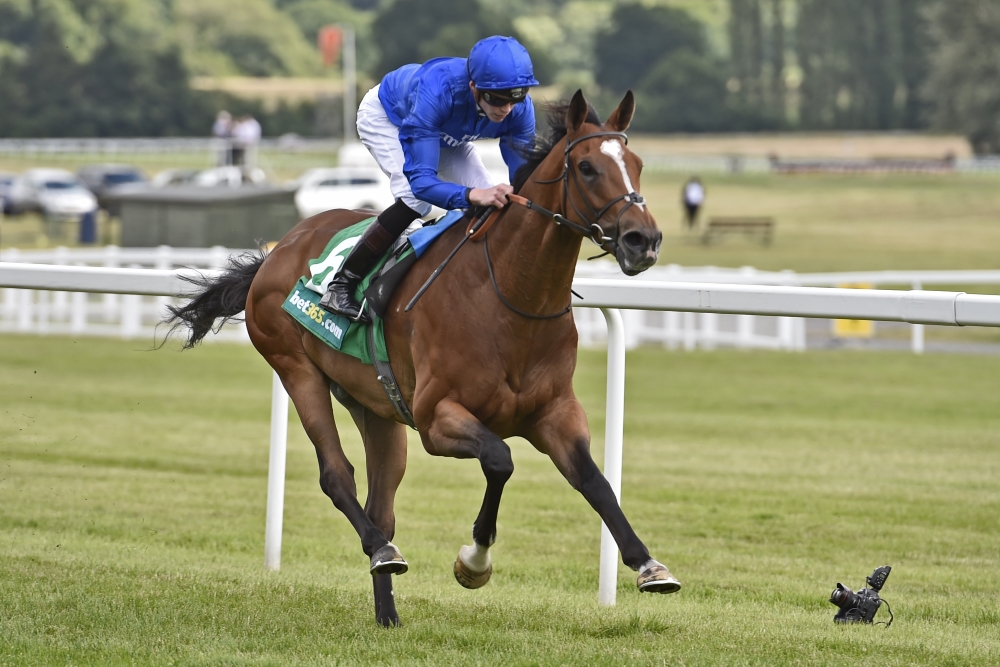 “We knew that there was no pace in the race, so we got out there and steadied it up for ourselves. James said that, once Trip To Paris came upsides him, he knew that everything else must have been struggling in behind, so he sat for a little bit longer.

“It was a great performance and we came here very confident. Conditions suited us in terms of ground and trip, and he has come on for his run at Sandown.

“The plan was always to potentially go down to Australia with him. We will see whether we give him another run beforehand but we want to go down there for the Cox Plate or the Mackinnon Stakes.

“They are two nice races and he could go with Tryster. We could have two running styles heading down there – one from the front and one from the back.”

Doyle declared: “It was a field full of hold-up horses and Scottish won the Doonside Cup at Ayr last year on the front end. He’s a lovely horse, who bounces off the ground, and seemed to enjoy himself out in front.

“I wound him up through the gears and he quickened away well. It’s nice when you have the horse who can do it that way – you can just enjoy the ride.”

Sent off a 3/1 short following victories in a Nottingham maiden and Newmarket handicap, the three-year-old filly went clear with a quarter of a mile to race but had to be kept up to her work in the closing stage to beat Bahaarah (Richard Hannon/Sean Levey) by half a length.

Crowley reported: “Golden Stunner was in front two furlongs out and started to wander a little bit. When I gave her a smack with my left, she went right and vice versa. She wasn’t doing an awful lot in front but had a little bit left up her sleeve.
“Ralph’s horses are in great form and they are all running well. It was a nice performance.”

Windsor maiden runner-up Majeste (Richard Hannon/Sean Levey) made his previous experience count to record an impressive victory at odds of 7/2 in the £7,250 Bathwick Tyres Maiden (2.00pm) over six furlongs.

The Acclamation colt quickened strongly to take the lead inside the final half-furlong before going clear for a two-length success, with 11/8 favourite Hathiq (Owen Burrows/Paul Hanagan), who pulled hard, coming out best in a blanket finish for second.

A pair of greys fought out the finish to the £25,000 bet365 Handicap (4.45pm) as 9/1 shot Boomshackerlacker (George Baker/Fergus Sweeney) edged out Dark Emerald (Brendan Powell/Richard Mullen) by a neck.

The closing £12,000 Grundon Recycling Handicap (5.15pm) over 10 furlongs saw Stars Over The Sea (Mark Johnston/George Baker) produce a brave front-running performance to prevail by three lengths at odds of 5/1.

Emiraaty (James Owen/Paul Hanagan) won the day’s race for Purebred Arabians, the 10-furlong Royal Cavalry of Oman International Maiden (1.25pm). The five-year-old, wearing a visor for the first time, asserted in the closing stages to prevail by a length over Lou Raynal.