Newbury Racecourse stages the second fixture of its Summer Evening Series this Thursday, July 5, with a seven-race card running form 5.40pm through to 8.55pm.

The evening sees the return of the popular Throwback Thursday Disco on the Crafty Filly Terrace after racing.

Newbury ran a competition for one lucky yard to name the fifth race on the card (7.50pm) along with badges for the evening, the chance to select the Best Turned Out in the race and viewing from the Royal Box. To enter, racing yards were invited to send in a team image along with a suggested race title using the Twitter handle @NewburyRacing and #racingstaffweek

Joe Tuite’s yard was selected the winner by Newbury’s Stable Manager, Pippa Eygelsheim. The Lambourn handler’s entry was the “Team Tuite’s On Fire Fillies’ Handicap”, in recognition of the yard’s four winners in the past week (please see picture below). 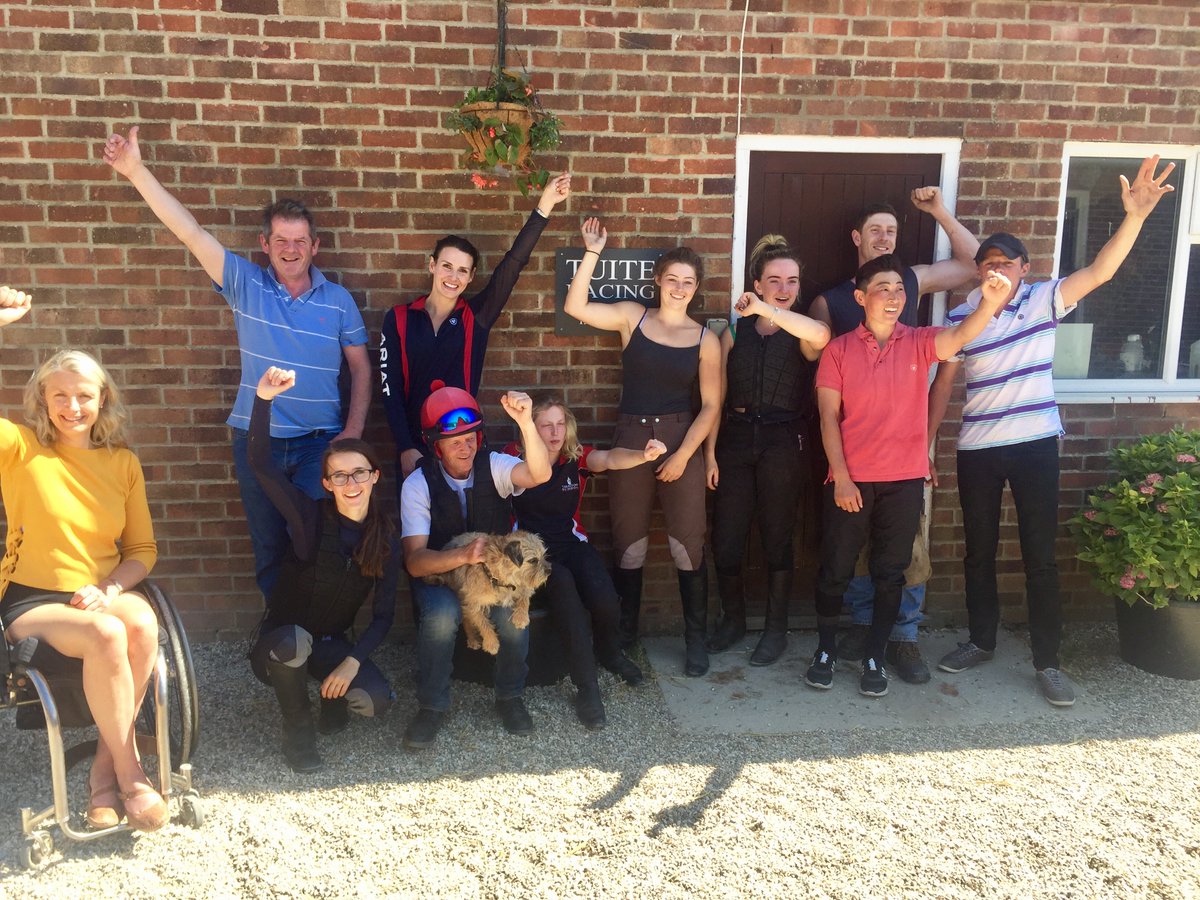 Racing Staff Week celebrates the dedication and specialist skills of those who work in the racing industry – the stable staff, stud staff, racecourse staff, gallop people, stalls handlers, valets and all the others who play a vital role in the production of British horseracing. It also aims to raise the profile of Racing Welfare, the only charity that supports all of racing’s workforce.

A field of five runners go to post for the feature race of the evening on Thursday, the £12,5000 Thatcham Butchers Handicap (7.15pm). The mile and a half contest has been a stepping stone for further success in recent years, with Scarlet Dragon going on to capture valuable handicaps at Newbury, York and Newmarket following his success in the 2016 renewal. The 2017 victor Duke Of Bronte went on to land the prestigious Appletiser Handicap at Ascot later in the same season.

This year’s field is headed by the unbeaten Celestial Force (Tom Dascombe/P J McDonald 9st 7lb). The three-year-old son of Sea The Stars plundered a novice event over 10 furlongs on Tapeta at Newcastle in May, before scoring by a half-length on turf in a novice contest at Thirsk over 12 furlongs later the same month.

Newmarket trainer James Fanshawe saddles the progressive Sleeping Lion (9st 2lb) who left behind his two debut efforts at Kempton and Newmarket when scoring convincingly in novice company (1m 3f) on Polytrack at Kempton on June 13. Tom Queally, who rode the Teofilo colt to victory last time out, has the mount again.

King Lud (Andrew Balding/Oisin Murphy, 9st 1lb), is yet to win in four starts, which included a four and a half-length defeat when the 8/13 favourite for a novice event at Chepstow over 10 furlongs in May. However, the three-year-old son of Cape Cross produced a good performance to finish second to Polish at Salisbury on his first try over 12 furlongs on June 12.

The three-year-old son of Cacique had previously been a fine third to the progressive Al Muffrih in a Newbury maiden – Martin Gray Celebration British EBF Maiden – over 10 furlongs on May 18 after coming home fourth on debut at Nottingham on May 1 over an extended mile.

“He ran well at Salisbury last time where things didn’t really go his way. That run proved that he stays a mile and a half and he was quite unlucky. He got trapped on the rail and had nowhere to go.

“This is his first run in a handicap, but I would be hopeful of a good performance. I think he can win a race like this and we’ll see if that is on Thursday.

“He is a horse I like and, whilst the ground will be fast, he has been running on generally similar ground and it will suit.

“As long as the ground is not rattling fast, he should run well. He was third at Newbury in a maiden in May and, this race being at Newbury, was one of the reasons I decided to run.

“Cacophonous is a strong galloper and Newbury is one of the best galloping tracks in the country, so it will suit.”

Completing the field is Soto Sizzler (William Knight/Luke Morris, 8st 12lb), who has yet to score in three career starts, but produced his best effort to date when a length second at 20/1 in maiden company (1m 3f) at Goodwood on June 8.

The gates open at 4.00pm and before the seven-race thoroughbred gets underway, there is a race for purebred Arabians at 5.05pm – the Dubai International Arabian Races At Newbury 29th July International Stakes over seven furlongs.

The going at Newbury is currently Good to Firm. Watering is taking place to maintain conditions.