McBride aiming for another Spiritual display in Weatherbys Super Sprint

The daughter of Pastoral Pursuits, one of 76 confirmations for the five-furlong showpiece which has a maximum field of 25, stormed to a convincing victory in a six-furlong novice fillies’ stakes at Newmarket on June 24. Paulownia, who was runner-up on that occasion, subsequently went on to score at Ascot on Saturday (July 9).

The two-year-old filly will race off the minimum weight of 8st on Saturday, having been purchased by the trainer for just £9,000 at Doncaster’s Silver Sale in August, 2015.

Newmarket-based McBride reported today: “Spiritual Lady is a definite runner at Newbury on Saturday, providing the ground doesn’t come up firm. I would settle for good to firm but would prefer it if there were some more showers during the week. She is a big, tall filly and I wouldn’t want to risk her on firm ground at this stage of her career.

“She won very nicely at Newmarket and had been working well beforehand. We have always thought a lot of her and initially thought that she would be good enough to be a Queen Mary filly.

“We planned to run her at Newmarket in the middle of May but she had a growth spurt and so we backed off her for a month. We had to run her on ground softer than ideal in order to make sure she got into this race.
“She travelled very well that day and the runner-up has come out and won at Ascot. The drop back to five furlongs is not a great worry as she has worked very well with fast horses at home. I actually think that five furlongs on good ground would be perfect for her. 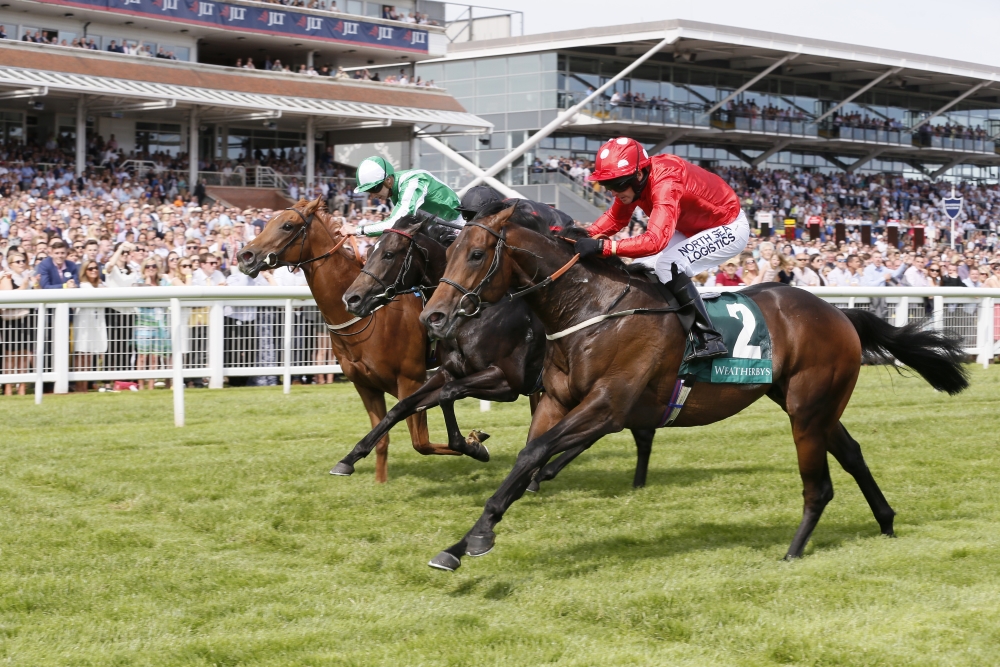 “I bought her half-sister Princess Cookie for 1,800 guineas in October, 2014, and she was quite good but she took a bit of time to come to herself. So I went and bought Spiritual Lady for £9,000 at Doncaster in August knowing that Princess Cookie was going to win races, which she duly did.

“I have entered Spiritual Lady in the Lowther Stakes and would be disappointed if she is not a black type filly. The conditions of this race are perfect for her and I expect her to run a big race.”

Richard Fahey has won two of the last three renewals of the Weatherbys Super Sprint with Peniaphobia (2013) and Lathom (2015) and the Malton handler is responsible for 17 confirmations including Thirsk winner Lady In Question (8st 5lb).

An eight-race card on Weatherbys Super Sprint Day, including a contest for Purebred Arabians at 1.25pm,  also features the £60,000 Group Three bet365 Hackwood Stakes (3.35pm) over six furlongs, which has attracted 17 entries.

James Fanshawe saddled subsequent British Champions Sprint winner Deacon Blues to glory in 2011 and the Newmarket handler has entered The Tin Man, who readily took a Listed race at Windsor in May before finishing eighth in the Group One Diamond Jubilee Stakes at Royal Ascot.

His rivals may include the 2014 Middle Park Stakes victor Charming Thought (Charlie Appleby) and Mr Lupton (Richard Fahey), who was second in last year’s Weatherbys Super Sprint and captured a heritage handicap at York on his penultimate start.

Trip To Paris (Ed Dunlop), successful in the Gold Cup at Royal Ascot in 2015, and Brigadier Gerard Stakes third Scottish (Charlie Appleby) feature among 15 contenders for the £30,000 Listed bet365 Stakes (3.00pm) over a mile and a quarter.