Massaat, who won on his first appearance for more than a year, and progressive stayer Defoe proved the star acts on Betfred Ladies Day with Olly Murs, at Newbury on Saturday, August 19.

A sell-out crowd of 23,434 – the biggest crowd at any meeting at Newbury for five years – was on hand to watch a nine-race card and Olly Murs, who delighted his fans with a performance on the Party In The Paddock stage after racing. Images of Olly Murs are available on request.

Owen Burrows, based locally in Lambourn, recorded the first G2 success of his career with Massaat, who stormed to a decisive victory under Jim Crowley in the £150,000 Betfred Hungerford Stakes (3.35pm) over seven furlongs.

The four-year-old, sent off a 12/1 shot, was runner-up in last year’s 2,000 Guineas and belied a 373-day absence as he quickened smartly to readily beat 9/4 favourite Librisa Breeze (Dean Ivory/Robert Winston) by a length and three-quarters. 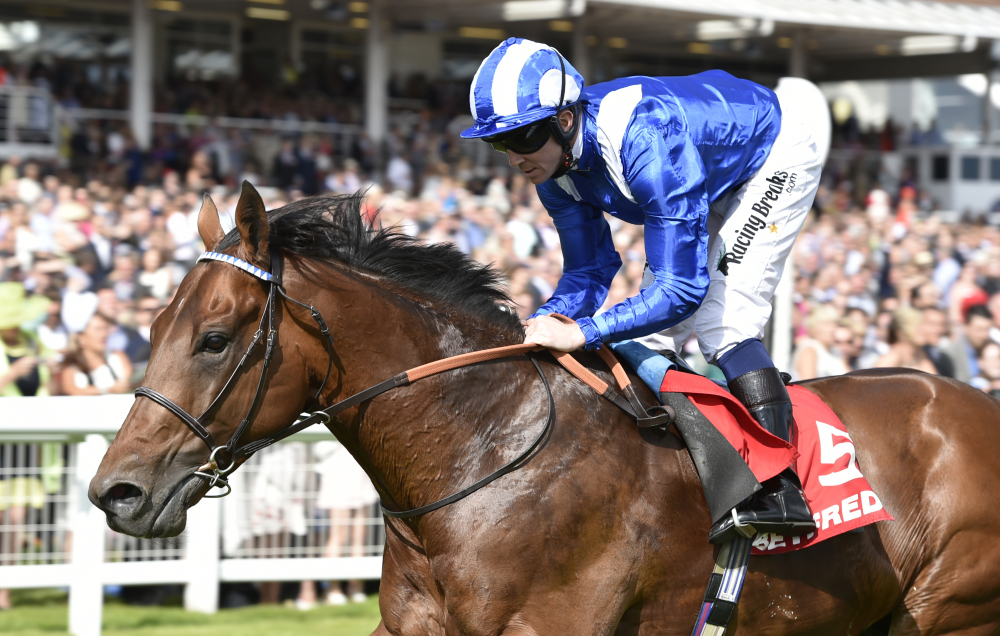 A delighted Burrows said: “I wasn’t expecting that – what a great surprise. Massaat had been working nicely but I thought he would be rusty and obviously today was seven furlongs. I was just looking to get him back on track but he has won impressively.

“He had a chip removed from a fetlock after his run at Salisbury last year and unfortunately he injured himself while he was recuperating at Shadwell.

“It has been a big team effort to get him back. Denis O’Brien back at Shadwell did a great job with him, as did my team at home – John Lake the head lad and Matt who looks after him and rides him every day. I must also thank Barry and Charlie Hills as they let me work him on the Faringdon Road gallop last week, which I used before the Guineas. It brought him on a lot.

“I was pleased with the way he travelled today. We will get him back home now. I didn’t go too mad looking for his next target as I wanted to see what happened and get today out of the way. Fingers crossed, he will be fine in the morning.

“I think we will have to look at G1 races with him now. He is entered on Champions Day. I think it is important he has some cut in the ground – I am not saying he wants it soft, but it was pretty firm at Salisbury when he hurt himself and I would keep him away from ground like that.

“This is my first G2 win. We won a G3 last year but this win is massive. Massaat was a big horse last year but things went wrong. We’ve also had a winner at Newmarket today and it has been a good day.”

Jim Crowley added: “It was a great training performance to bring him back. It was the first time I had ridden him in a race today and he gave me a great feel.

“He loved the slower ground – I think it is important to him as he is a big horse and hits the ground quite hard.

“Going over seven furlongs on his first run back was great because he was little bit fresh and free early on. He saw the race out well.

“I think races over seven furlongs with cut in the ground and a mile suit him. He is a strong traveller although he is a big horse. Hopefully, the freshness is out of him now and he will relax a bit better next time.”

Defoe made an impressive first appearance in Pattern company when taking the G3 Betfred Geoffrey Freer Stakes (2.25pm) over an extended 13 furlongs, a performance that saw the Roger Varian-trained colt cut by bookmakers for the G1 St Leger at Doncaster on September 16.

The 13/8 favourite, an impressive winner of the Al Zubarah London Gold Cup Handicap at Newbury earlier this season, scored cosily by three-quarters of a length but had to survive a stewards enquiry after impeding runner-up Wall Of Fire (Hugo Palmer/Josephine Gordon) entering the final furlong.

Andrea Atzeni said: “Defoe travelled brilliantly through the race and picked up really well. The further he went, the better he was and I never really had to get after him. I was always comfortable that he was going to win quite comfortably.

“He has won on good ground before but probably doesn’t want it too firm. He is by Dalakhani so is better with a bit of cut in the ground and he stays well. He is a horse with a bright future and getting better with each race.

“I think he can definitely take the step up to a race like the St Leger now. Today was a test to see if he stayed – we thought he would but the boss, Sheikh Mohammed Obaid, was very keen to run to let him take his chance today to make sure.

“The St Leger looks a very interesting and competitive race. Defoe is getting better and better – he could be anything.”

Hey Gaman bravely made all of the running under Martin Harley to take a thrilling renewal of the £25,500 Listed Denford Stakes (1.50pm) over seven furlongs – a juvenile contest that has been won by subsequent Classic winners Rodrigo De Triano, Lammtarra, Haafhd and Just The Judge.

Sent off a 100/30 chance following a five-length success at Newmarket on July 29, the James Tate-trained New Approach colt was all out near the line to see off the late challenge of 9/4 favourite Red Mist (Simon Crisford/Silvestre De Sousa), with a short-head separating the pair on the line.

James Tate said: “Hey Gaman is a big beast of a horse who has always worked really well. I was disappointed with a couple of his runs prior to today but it turns out that he likes it soft.

“He likes to lead and there was nothing good enough to lead him today. I felt that the second had the advantage of slip-streaming us all the way but the best horse won.

“Martin took no prisoners and he had me a bit nervous a couple of furlongs out as he went very fast, especially into a headwind.

“He is out of a Dubawi mare, Arsaadi, who was second at Royal Ascot for his owner Sultan Ali and seems to have inherited a bit of her strength.

“A seven-furlong Group race is next and then we are hoping that he will get a mile next year, although I would be nervous of racing him on ground with no mention of soft in the going.

Martin Harley added: “It was tough out there. The ground, which is soft and a bit tacky, was one thing but the headwind was another. He jumped very smartly and I went on about my business. It was a good performance on a good horse.

“He has a big heart and he idled in front at Newmarket last time. I rode a good race today – we didn’t hang about and I was pressing him from a long way down.”

Squats proved a fitting winner of the £20,000 Betfred TV Ladies Day Handicap (3.00pm) when quickening up well to score under Georgia Cox, one of two female jockeys in the seven-furlong contest.

The William Haggas-trained five-year-old, recording his first success since beating future G1-winning sprinter Profitable in an Ascot nursery handicap in 2014, ran on strongly from the rear to score at odds of 5/1, with Graphite Storm (Clive Cox/Jim Crowley, 8/1) taking second.

Maureen Haggas, wife of the winning trainer, commented: “Squats just hasn’t had any luck this year. He has been drawn on the wrong side at Ascot and Adam Kirby made the running on him last time, when he is a horse that likes to get into as much trouble as he can.

“Georgia gets on really well with Squats. She was really worried because there were so many withdrawals and she wouldn’t be able to get him in behind. She let him flop out of the stalls, get in behind and he loves getting into trouble.”

Georgia Cox added: “Squats settled out the back quite nicely, which I was surprised about. Normally, you want to see non-runners but he wants a big cavalry charge to aim at. We got stuck in a bit of traffic but, when went it became clear, he really quickened nicely.”

Haggas also provided another female jockey with victory as Mam’selle scored under Carole Bartley to take the closing £9,000 Betfred Ladies Derby Handicap (5.15pm). The 11/8 favourite got the measure of With Pleasure (John Flint/Isobel Williams (5)) near the line as Newmarket-based Haggas registered a 13.25/1 double.

Progressive three-year-old Nathan followed up a recent Bath success with victory in Division 1 of the 10-furlong £8,000 Betfred “Supports Jack Berry House” Handicap (1.20pm). The 9/4 favourite, trained by Alan King, stayed on strongly to prevail by length and a half over Doctor Bartolo (Charlie Hills/Jim Crowley), despite wandering across the course under Fergus Sweeney inside the final furlong.

Alan King said: “I haven’t had Nathan long and he is growing up all the time – the more racing he gets, the better.

“The jockeys said that the ground was pretty tacky and that was my one worry because his only poor run was on soft here earlier this year but he seems to have put that to bed.

“He really should want further but he travels very well in a race. He has a lot of stamina in the pedigree and did settle very well today. He is progressive and I think we will creep away with him.”

Sweeney completed a near 17/1 double in Division 2 of the same race (4.40pm) as 9/2 chance Capton, trained by Henry Candy, made all of the running for a half-length success over Fast Dancer (Joe Tuite/Edward Greatrex (3)).

Greatrex enjoyed better luck in the 12-furlong £15,000 Betfred Proud To Work With Simpson Group EBF Maiden (4.05pm) on board the Saeed bin Suroor-trained Gold Star, with the 2/1 favourite posting a comfortable three-length success.

There was a Swedish-trained winner in the day’s race for Purebred Arabians, the G3 Royal Cavalry of Oman Clarendon Stakes (12.50pm) over five furlongs, as Macallan made every yard to score for Bodil Blomqvist, who is based near Gothenburg, and jockey Anna Pilroth.