Clive Cox, who trains in Lambourn, today hosted a media visit organised by Newbury Racecourse ahead of the Group One Al Shaqab Lockinge Stakes, which is run at 3.55pm on Saturday, May 14.

He showed Kodi Bear off to five camera crews, two radio broadcasters, photographers and media, relating how the four-year-old son of Kodiac nearly lost his life just over a year ago when being prepared for the British Classic, the 2,000 Guineas.

Cox explained: “It was amazing what he achieved last year after a big hold-up.

“We trained him for the 2,000 Guineas and were really quite excited by him.

“We still don’t know what caused the infection – I believe he got cast in his stable and had a swelling above his knee which broke out into an infection that got into the lymph drainage canal.

“He was very poorly for a week and we were more intent on having a horse to run at all. For a couple days we were very concerned about him – the bacteria that was found in him wasn’t nice, like a MRSA-type bug.

“He was here and then had to go to the vets for 24 hours so it was a concerning time and that was why I was so extremely proud of what he did achieve last year.

“His whole constitution is amazing because he had an awful lot of antibiotics. I am just very pleased that is all behind us and we still have a top-class horse on our hands.”

Kodi Bear made his racecourse debut two years ago at Newbury on the Friday of the Lockinge meeting and finished second, beaten by three quarters of a length, by Adaay who he is due to meet again in the Al Shaqab Lockinge Stakes, Newbury’s richest race worth £350,000, on Saturday.

Cox said: “That was a good start and he has moved on a lot from there. We have always held Kodi Bear in high regard. 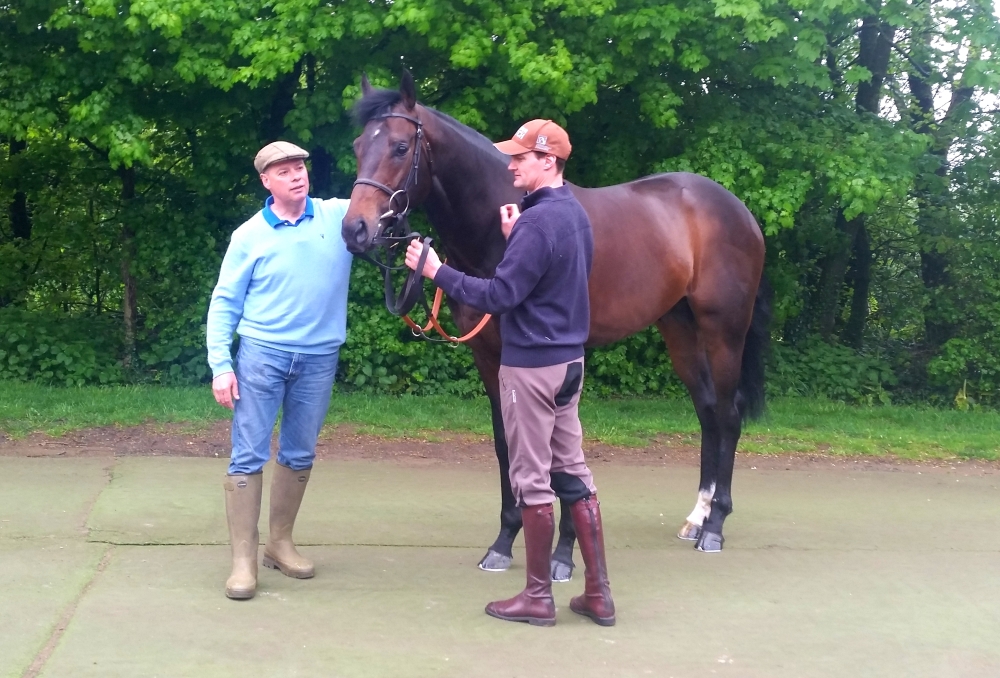 “He ran a nice race in the Coventry Stakes (at Royal Ascot) the following month, then won at Ascot in a seven-furlong Listed race and ran second to Belardo in the Dewhurst Stakes (Group One, Newmarket). So he has always been a horse who has performed at the highest level.

“Last year he had the delayed comeback, winning a Windsor Listed race in July, did not have a very good passage in a French Group One, won both the Group Three Sovereign Stakes at Salisbury and the Group Two Celebration Mile at Goodwood very impressively before running not badly against Solow at Ascot (Group One Queen Elizabeth II Stakes) when he was bit fresh after having an over-reach before the race.”

The trainer is delighted with Kodi Bear. He said: “The colt is stronger this year – most horses are still developing from three to four – and that is the opinion of everyone who rides him.

“He is in peak condition now and I am very happy and pleased with him. Obviously, coming back in a Group One is a big ask and some of his opponents have had a run already.

“We did not feel it was necessary to run with a penalty in the bet365 Mile at Sandown – he has had a couple of racecourse gallops at Kempton Park.

“I hope he is there to do a job at Newbury on Saturday and we have a bright season ahead of us. We all believe he is a Group One horse and potentially he is the best miler we have ever had.

“It is great for his owner Olive Shaw, whose late husband Dennis was one of my biggest supporters when I started training.

“Kodi Bear is versatile as regards the ground – it was very firm at Windsor and quick at Ascot and there are no concerns about softer ground as it was quite soft at Goodwood.

“It is a very interesting race and Gerald Mosse will ride him again. Gerald has done nothing wrong on him and we have a very good association with him as well as Adam Kirby.

“Gerald has won a Group Two on Kodi Bear and that has set the tone. Gerald has an amazing record for us and we started using him on Beacon Lodge.

“Kodi Bear is quite laid-back at home, though he can have a buck and a kick, which is why we have taken him to Kempton a couple of times.

“There are a lot of top mile targets for him this year and I hope he can get off on the right leg on Saturday.”

Newbury Racecourse’s Andy Clifton gave news of the going: “The ground at the moment (4.00pm today) is Good, Good to Firm in places.

“We had six millimetres of rain yesterday and there has been rain on and off today, with more forecast. It should be dryer for the rest of the week.

“The track, which is in fantastic condition, has not been raced on since October, following the abandonment of our last meeting.

“Al Shaqab Lockinge Day is our richest day of racing, with £750,000 on offer, and the day before, Starlight Charity Day, is likely to see the first progeny of Frankel race.”

Two-year-old Cunco, by Frankel out of the mare Chrysanthemum, is trained by John Gosden and set to appear in the opening race on Friday, the Welcome To The Starlight Raceday Maiden at 2pm.