Lizzie Kelly is relishing the prospect of having another chance to win the £155,000 Betfair Hurdle on her stable’s latest up and coming horse Monsieur Lecoq.

Kelly guided Agrapart, trained by her stepfather Nick Williams, to land Britain’s richest handicap hurdle at Newbury in 2016 and puts Monsieur Lecoq, who is owned and trained by her mother Jane, in a similar bracket.

After wins at Ffos Las and Sandown this season Monsieur Lecoq has risen to an official handicap mark of 132 and been allotted 10st 5lb in the big race weights which are published today.

Mohaayed has been set the top weight of 11st 12lb with Getaway Trump and Al Dancer, the sponsor’s 6-1 joint favourites on 11st 1lb and 11st respectively.

Monsieur Lecoq, who is 12-1 in Betfair’s odds, will need 21 horses to defect in order to be guaranteed a start in the February 9 race, which has a maximum field of 24 plus two reserves, but he would have made the cut in each of the last two runnings of the race with that rating.

Monsieur Lecoq, who is trained in South Molton, Devon, was raised 10lb after his latest win when he comfortably landed a Class 2 handicap at Sandown by nine lengths.

“He is a nice horse and though slightly immature everything he does, he does quite easily so he is an exciting type,” said Kelly, 25.

“When Agrapart won it, he ran and finished third in the Tolworth Hurdle which was the same meeting at which Monsieur Lecoq ran, so in terms of preparation it has been similar and with Kalashnikov winning as a novice last year he has the right type of profile.

“There is definitely more to come from him. He is not as forward as Agrapart. He very much knew his job at his age but at the same time he had run on the Flat at a younger age and had probably done a little bit more. This horse is more immature but will have learned a lot from his run at Sandown.”

Kelly’s 2016 victory completed a memorable winter coming just two months after she became the first female jockey to ride a Grade 1 winner over jumps on Tea For Two in the 2015 Kauto Star Novices’ Chase.

“I remember everything about the day I won on Agrapart,” she said. “He had a light weight and I had to work quite hard to get down to the weight.

“We were quite adamant that we wanted to be out in front or near the front. There was a standing start but because he had come out of the stalls earlier in his career he understood the idea of jumping and running. That worked in our favour.

“I remember a jockey beside me telling me that I shouldn’t push too early when I was getting down to push turning in because it’s a long way home he was saying. But I knew the horse very well and I continued.

“It was a fantastic day. It was my first big winner after winning the Grade 1. It couldn’t have been more different going from a three-mile chase to a two mile hurdle. Agrapart is such a lovely horse.

“It’s really exciting to get another chance to ride in the Betfair Hurdle. The horses we train at home are of a high quality and to be able to ride in races like this is a privilege.” 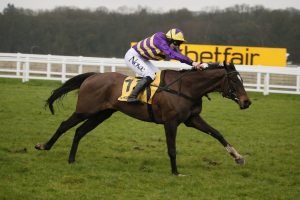 Kelly has a closer connection to Newbury than most having spent the summer working in the racecourse marketing department.

“I was a marketing assistant,” she said. “I’ve done a degree in event management. I was always very keen on the marketing side of things. It was a massive learning curve, even by being in a completely different environment like an office.

“It was a great way to spend the summer when we don’t have very many runners. It was a brilliant opportunity. Newbury took a bit of a punt on me because I had never done anything like it before and I thought it was fantastic.”

Since the entries were released last week two horses, the Paul Nicholls-trained Getaway Trump and Al Dancer, from the Nigel Twiston-Davies stable, have attracted most punters’ interest.

Betfair spokesman, Barry Orr, said: ‘’It’s no surprise that the Betfair Exchange Trophy winner, Mohaayed, is allocated top weight but all the money is for the top two in the market with Al Dancer backed from 10-1 to 6-1 and Getaway Trump 6-1 from 8-1.

40/1 Distingo, High Expectations, Not Never, West To The Bridge