Won in 2012 by racing superstar Frankel, Newbury’s showpiece on Saturday 18 May forms part of the British Champions Series comprising the very best races in the British Flat racing season.

Notable among the entries are the Marco Botti-trained Planteur and Godolphin’s African Story who finished 3rd and 5th respectively in the Dubai World Cup on Saturday evening, the world’s richest race as well as Roger Charlton’s popular globetrotter, the 7 year old Cityscape.

There is a strong international flavour to the race at this stage with entries from trainers based in Ireland, France and Germany.  Aidan O’Brien has entered no less than 5 horses in the race, led by 2012 Epsom Derby winner Camelot.

As ever, the Godolphin team are strong handed with 6 entries including Farhh who twice finished runner up to Frankel at Goodwood and York last year and who will now hope to go one better without his nemesis in opposition.  They also have entered Aesop’s Fables, previously trained by Andre Fabre and a Group 1 winner last season in France.

Local trainer Richard Hannon has a Group race winning trio entered in the race (Chandlery, Trumpet Major and Libranno) which he bids to win again since having back to back winners in 2010 and 2011 with stable stars Paco Boy and Canford Cliffs. 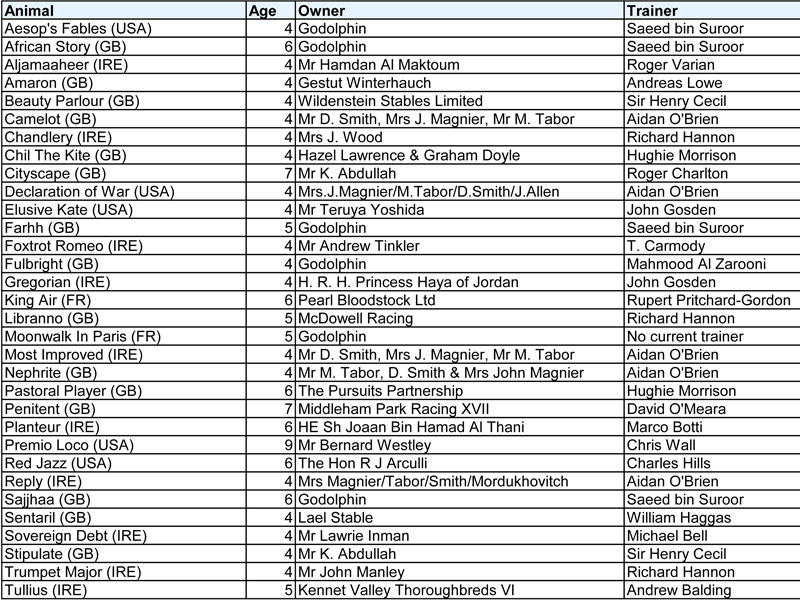