The Exceed And Excel colt James Garfield, sent off a 100/30 shot after going down by a nose in the G3 Acomb Stakes at York on August 23, ran on strongly under Frankie Dettori to hit the front half a furlong from home and galloped out well to beat 5/2 favourite Invincible Army by three quarters of a length in 1m 10.64s – a new two-year-old record for six furlongs at Newbury. 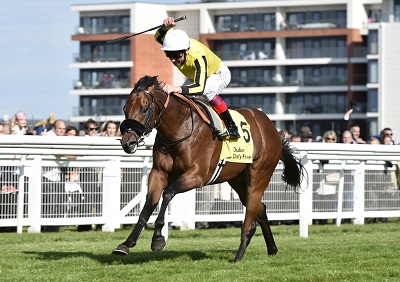 Scott revealed: “It has been the most amazing week and I am very grateful to everyone that has worked hard with the horse at home. It is great when it all comes together.

“James Garfield has danced every dance this year and has been unlucky on several occasions. He has shown it over five, six and seven furlongs, and is a pretty versatile horse who has improved physically the whole time.

“I think he lost his position a couple of times but Frankie was travelling so well that he was happy to keep the horse in a rhythm and not rush him. He came through the field really nicely and hit the line great.

“We will go to the Breeders’ Cup now – the G1 Juvenile Turf (November 3) has always been the race we have been wanting to go to and he will get the tight mile at Del Mar.

“James Garfield has grown and strengthened, put on plenty of condition and there is no reason why he can’t keep progressing.”

Winning jockey Frankie Dettori said: “George was telling me after a few glasses of champagne last weekend how this horse was going to win today and he was spot on. He is an up-and-coming trainer and today is his biggest win.

“James Garfield is a bonny horse, who was just touched off at York, and now we are going to take our chance in America. He stays seven furlongs as well but George had this race in mind for a long time and it looked a good opportunity.”

David Simcock, another Newmarket trainer, captured the £60,000 G3 Dubai Duty Free Legacy Cup (2.15pm) for a third successive year as 13/2 shot Desert Encounter capitalised on a drop in class with a swooping victory under Sean Levey in the 11-furlong contest.

The five-year-old, who had finished third in the G1 Coral-Eclipse and sixth in the G1 King George VI & Queen Elizabeth Stakes on his previous two starts, ran on strongly down the inside rail to beat 9/2 favourite Second Step by a neck, with the unlucky in running Secret Number, owned by Godolphin, trained by Saeed bin Suroor and ridden by Gerald Mosse, taking third, three quarters of a length in arrears.

David Simcock commented: “Desert Encounter had two tough assignments in the Eclipse and the King George, which was a real slog. We have given him a relatively easy time since then and I thought he would improve for today’s run, so that was very pleasing.

“He was disappointing in the King George because he was still travelling strongly two furlongs out but emptied big-time in the last furlong. I don’t know whether a mile and a half on soft ground stretched him that day but he was certainly very happy on good ground today.

“He has a couple of options now. He is in the Champion Stakes at Ascot and we will also look at the Canadian International at Woodbine as well. The Canadian race is very valuable and tends to be a race just below G1 level, even though it is a G1 race.

“Desert Encounter has been trained for longevity. He had an easy time as a two-year-old and was lightly raced at three. Last year was his moving year and I don’t see why there isn’t another couple of seasons in him yet.”

Sean Levey added: “Desert Encounter has done nothing but improve since winning a Listed race at Ascot in May. He has run in all the big races and run well in them.

“Mr Simcock thought this was the race for him after he ran in the King George and I was very confident that he would do the job. I was glad to see him reward everyone.”

The 8/1 chance, trained by David Griffiths in Yorkshire and partnered by David Allan, gamely repelled all challengers for a three-quarter length verdict over 9/2 favourite Cotai Glory in a quick time of 58.79s for the five furlongs.

David Griffiths said: “Everything went right for Take Cover. They jumped well – we thought that Caspian Prince was going to take us on but he didn’t – and Take Cover has just stuck on.

“David said that today was the fastest he has ever broke from the stalls – he was two lengths clear after they had gone 20 yards. He doesn’t lie down easily when they come to him either, he digs in and pulls out a bit more for you. He is the horse of a lifetime.

“He is not going to Chantilly for the Prix de l’Abbaye because he has to go in the stalls last and his blind taken off at the very last minute. Last year, he came out with the blind still on because nobody shouted and we made the decision not to go this time.

“There are a couple of races out in Ireland for him and we will get him back and have a look. Hopefully, the owner will keep the horse in training next year as he is better than ever at the minute.”

Brorocco, wearing the silks that Mill Reef sported throughout his career, proved an apt winner of the 10-furlong £75,000 Dubai Duty Free Handicap (3.25pm), when scoring for local handler Andrew Balding, jockey David Probert and the Kingsclere Racing Club. The famous black and gold colours were gifted to the Balding family by Mill Reef’s owner Paul Mellon.

Four-year-old Brorocco, sent off the 8/1 co-favourite, quickened impressively from the rear to hit the front passing the furlong-pole and stayed on well to beat fellow market leader Fidaawy by a length.

Andrew Balding said: “The plan was to go for the Cambridgeshire Handicap at Newmarket next weekend but Brorocco wasn’t going to get into that race, so we crept into this race and it was a good Plan B.

“It helps when they go a good gallop, which they do in these big fields, and he got his run today.

“It’s nice for those colours to be back in the winner’s enclosure, particularly on the day of the Mill Reef Stakes.”

David Probert declared: “Everything went to plan. It is very important with this horse to get him switched off in the early stage of the race and the strong gallop allowed him to do just that.

“I wanted to give him own space up the straight and he has got a very good turn of foot when he wants to use it. He has his quirks about him but Steve Williams, who rides him every day, said that the horse was in good order so it’s a big well done to the team.”

Another set of famous colours were carried to victory in the 12-furlong £11,500 Dubai Duty Free Finest Surprise Handicap (4.35pm) as the William Haggas-trained Daphne, home-bred by Her Majesty The Queen, rallied strongly under Ryan Moore to score at 8/1 on her first start in 367 days by three quarters of a length from 13/8 favourite Weekender, the pair clear.

John Gosden claimed both divisions the seven-furlong £8,000 Wedgewood Estates EBF Novice Stakes, including an impressive display from the regally-bred Emaraaty (1.45pm), who was purchased for 2.6 million guineas by owner Hamdan Al Maktoum as a yearling.

Sent off the 4/9 favourite after finishing fourth on debut at Sandown Park, the half-brother to dual G1 scorer Izzi Top readily quickened clear of his rivals before being nudged out by Jim Crowley to beat Magnificent by two and a quarter lengths, with six lengths back to third home Epic Fantasy.

Recent Kempton Park fifth Fennaan also showed the benefit of previous experience to take division one (1.15pm) under Jimmy Fortune. The 7/1 chance took up the running over a furlong out and resisted the late challenge of 7/2 favourite Sam Gold to prevail by a head as the first two finished clear of Alfararqad in third.