Paul Nicholls today (Monday 4 February) unveiled his plans for Betfair Super Saturday, which features the Betfair Denman Chase and the Betfair Hurdle, the richest handicap hurdle in the UK.

Irish Saint, an impressive winner on his most recent start at Ascot, is expected to relish the expected soft ground on Saturday. The five-year-old bounced back from two disappointing efforts earlier this season with a wide-margin victory in the Grade 2 Keltbray Holloway’s Hurdle, but the improved showing came as little surprise to Nicholls. 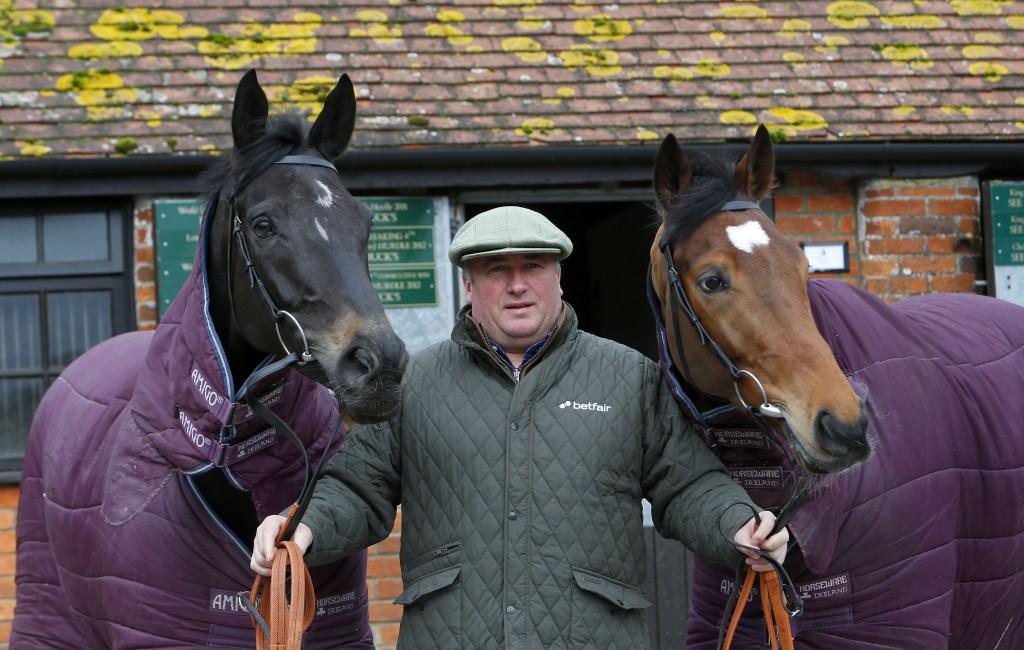 The seven-time champion jumps trainer said at his Dicheat stables: “Irish Saint was very slow to hand this year and was found to have injured his hind joint. But he travelled well on his first start [at Newbury] before he fell at the last.

“He got stuck in the middle at Ascot next like a lot of them but he still wasn’t ready.

“But he relished the testing ground and hosed in [at Ascot]. The handicapper has raised him 12lb but he only has a 5lb penalty, so he’s nicely in and you can see why he’s favourite. He must have a leading chance”, Nicholls added.

Irish Saint heads the betting with the sponsors Betfair at 6/1 with his stablemate, the unbeaten Irving, next at 7/1 after the five-day declaration stage in which there remain 29 possible runners.

Irving has won all three starts since being transferred from France, but his trainer issued words of caution for ante-post punters. “He’s been schooling well and working nicely but I’m concerned about the ground, so we will have to see how it unfolds.

“We think he is well-handicapped but I’m loathe to run him if it’s very testing. He likes decent ground and I want to look after him.”

Clerk of the course Richard Osgood described the ground as “soft, heavy in places” and, although showers are expected throughout the week, fresh ground has been set aside on the course.

Far West, in the same ownership as Irving, has also been left in the prestigious Grade 3 contest worth £152,500 – but Nicholls will not run both.

The Betfair Denman Chase, named after one of Nicholls’ best ever horses, may see Gold Cup fancy Al Ferof line-up. He was last seen when plugging on for third in the King George at Kempton on Boxing Day.

Nicholls believes the testing ground didn’t suit his charge and he would rather send the grey straight to Cheltenham than give him a tough race on a heavy surface.

Promising hurdler Calipto, who made a winning debut for his new handler at Newbury in November, is set to return to Berkshire for the opener on Saturday. The gelding was described by Nicholls as “as good a juvenile as we have got”.

Tidal Bay is also on course to make his 42nd start of a brilliant career in the Denman Chase. The 13-year-old has the Grand National as his big aim but, with eight weeks to Aintree, Nicholls was keen to get another run into him. With conditions in his favour, racing at Newbury is preferable to a long journey over to Leopardstown.

Dodging Bullets is a leading fancy for the Arkle in March and he could bid to extend his unbeaten run over fences to four, also in the Cash Out Your Bets at Betfair Game Spirit Chase.Nicholls thinks he will be suited to the long, galloping straight at Newbury.

Gilgamboa, a general 8/1 shot, was the biggest name not declared this morning. Melodic Rendezvous will shoulder top-weight if the Champion Hurdle entry lines up, while Willie Mullins has left in Smashing who is set to be the only Irish challenger.

“The richest handicap hurdle in Britain is shaping up to be a cracker, but from a betting perspective a lot hinges on the Paul Nicholls stable.

“Irving has been the ante-post favourite for some time, but his stablemate Irish Saint is now the 6/1 market leader due to the prospects of soft ground. Far West, the other possible runner from Ditcheat is unchanged at 16/1.”

“We’re very grateful to Paul for opening up his yard today. He certainly looks to have a strong hand in Saturday’s Betfair Hurdle with Irish Saint, Irving and Far West all holding live chances.

“We’re very pleased with the entries for Betfair Super Saturday and it promises to be a fantastic day’s racing. Denman is our guest of honour and he will be leading out the runners before the Betfair Denman Chase.”