A total of 54 exciting entries are unveiled today for the thrilling 2017 renewal of the £155,000 Betfair Hurdle, staged at Newbury Racecourse on Saturday, February 11, Betfair Super Saturday.

First staged in 1963 and run over an extended two miles, the Grade Three Betfair Hurdle is Britain’s richest handicap hurdle and a maximum field of 24 runners can line up.

Weights for the 2017 Betfair Hurdle will be unveiled on Wednesday, January 18.

The six-year-old has developed into a very useful performer and recorded the biggest victory of his career when taking the Grade Three Swinton Hurdle at Haydock Park in May.

He has also enjoyed two other wins in his seven starts over hurdles, taking a maiden at Fakenham just under a year ago and novice at Huntingdon. Gwafa was last seen out when fifth and last in a Listed hurdle at Kempton Park in October.

Webber, who is based at Cropredy in Oxfordshire, said: “Gwafa pulled a tiny bit of bone off a joint when he stumbled at Kempton in October.

“The plan was to give him a bit of a break after that run anyway and he has come back very well indeed.

“He will probably go for an away-day gallop sometime at the end of next week.

“The ground would have to be decent if he was to go to Newbury as he doesn’t want it tacky.

“Newbury is certainly an option for him and, if he doesn’t go there, he would most likely run in the Elite Hurdle at Wincanton.

“He seems very fresh and well. Richie McLernon rode him yesterday and was thrilled. We will step him up again next week and see where we are.

“He is still gaining experience and I don’t see why he can’t step up again. He is such a pro and such a trier.”

Nicky Henderson is the most successful trainer in the history of the Betfair Hurdle with five victories, most recently My Tent Or Yours in 2013. 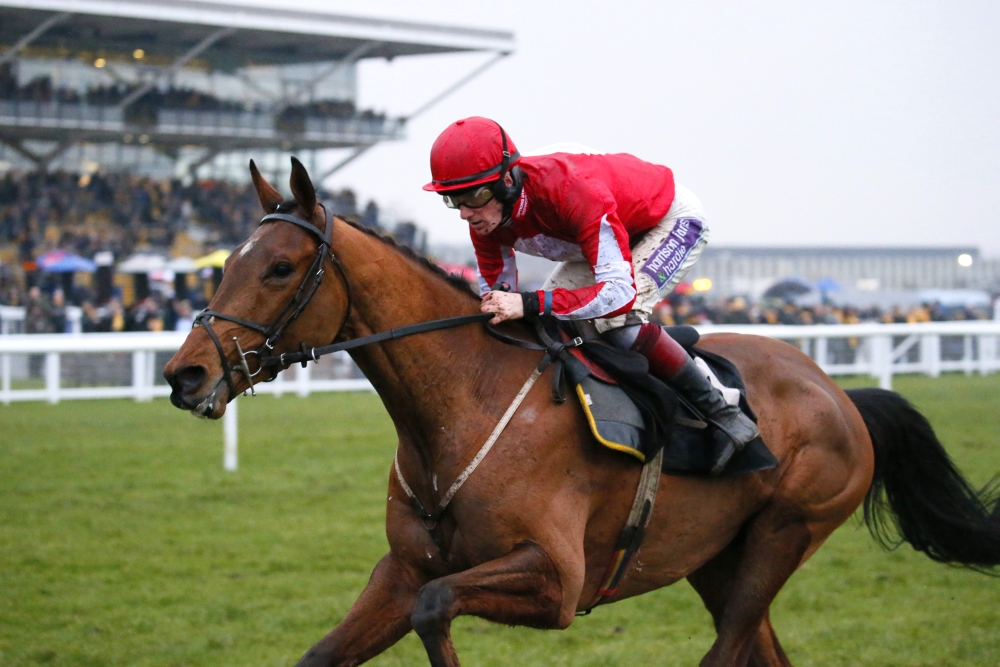 Another trainer with multiple successes in the Betfair Hurdle is Gary Moore, who has recorded three wins including Violet Dancer in 2015. Moore’s one entry in 2017 is the lightly-raced Krugermac (20/1), a useful novice last season.

Reigning champion Jump trainer Paul Nicholls triumphed in the Betfair Hurdle withZarkandar in 2012. His trio of entries this year are Modus (16/1), Zubayr (33/1)and the intriguing novice Movewiththetimes (10/1 favourite), successful on two of his three starts over hurdles this season and a staying-on fifth in a Grade Two contest at Cheltenham in November.

Nigel Twiston-Davies took the honours with Splash Of Ginge in 2014 and his three possible starters in 2017 include last season’s Champion Bumper winner Ballyandy (12/1) plus winning novice Ballyhill (33/1)and recent Sandown Park runner-up Robinshill (33/1).

Other trainers with strong hands include Alan King, with Winter Escape (12/1), who needs to bounce back following a disappointing run in the Greatwood Hurdle at Cheltenham in November, and G2-placed novice Keep In Line (16/1) among his three engaged.

Dan Skelton has four to choose from, including G2 Scottish Champion Hurdle winner Ch’tibello (20/1) and Newbury scorer Meet The Legend (25/1), while the two Philip Hobbs-trained entries are last season’s County Hurdle fourth Wait For Me (14/1) and Ozzie The Oscar (25/1).

There have been four Irish-trained winners of the Betfair Hurdle, the latest being Essex in 2005. There are 14 Irish-trained entries this time around, including eight from Ireland’s champion Jump trainer Willie Mullins, and four from Gordon Elliott.

Among the Mullins octet is G1 winner Footpad (25/1), while the Elliott’s entries include Mick Jazz (20/1), who was placed twice over hurdles at Newbury as a juvenile for former trainer Harry Fry,and Sutton Place (25/1), who was undefeated over hurdles last season including in a G2 contest on his latest appearance at Fairyhouse in March.

The two other Irish-trained possibles are Rashaan (Colin Kidd, 20/1), who lowered the colours of the mighty Apple’s Jade in a G2 contest at Down Royal in November and De Name Escapes Me (Noel Meade, 25/1), successful twice in novice company last season.

Other contenders include Clyne (Evan Williams, 25/1), successful on his latest four starts over hurdles, and Bigmartre (Harry Whittington, 25/1), winner of a competitive handicap hurdle at Kempton over Christmas.

Lizzie Kelly became the first female rider to triumph in the Betfair Hurdle when successful in 2016 on Agrapart, trained by her step-father Nick Williams, who is not represented this year.

Betfair Spokesman Barry Orr commented today: “It’s a typically competitive list of entries and 10/1 the field reflects that but the market principles, Movewiththetimes and Ballyandy could be open to further improvement and deserve their place at the head of the market.”

Betfair Super Saturday offers a feast of top-quality action. In addition to the Betfair Hurdle, other highlights include the Grade 2 £50,000 Betfair Denman Chase and the £50,000 Grade 2 Betfair Exchange Chase.