It was day two of the Dubai Duty Free International Weekend at Newbury Racecourse on Saturday, September 17, with the eight-race card featuring Group race action and competitive handicaps. The going was Soft, Good to Soft in places. After racing, racegoers were treated to a DJ set from internationally-acclaimed DJ Mark Ronson.

The most prestigious race of the afternoon was the £75,000 G2 Dubai Duty Free Mill Reef Stakes (2.15pm, 7 runners) over six furlongs for two-year-olds which saw a local success for Lambourn handler Clive Cox with Harry Angel (2/1 favourite).

The son of Dark Angel was making his first appearance finishing second at Ascot in May, having being withdrawn at the start on his next intended appearance when unruly at the stalls at Goodwood at the end of July.

Partnered by Adam Kirby, Harry Angel travelled keenly and took up the running entering the final furlong, seeing off another son of Dark Angel, Perfect Angel, by two and a half lengths,

A delighted Clive Cox said: “It was a blip at Goodwood last time after he was a promising second first time out. He was bruised quite badly at Goodwood and it is great testament to the team at home, who have worked tirelessly, that we have been able to get him back. 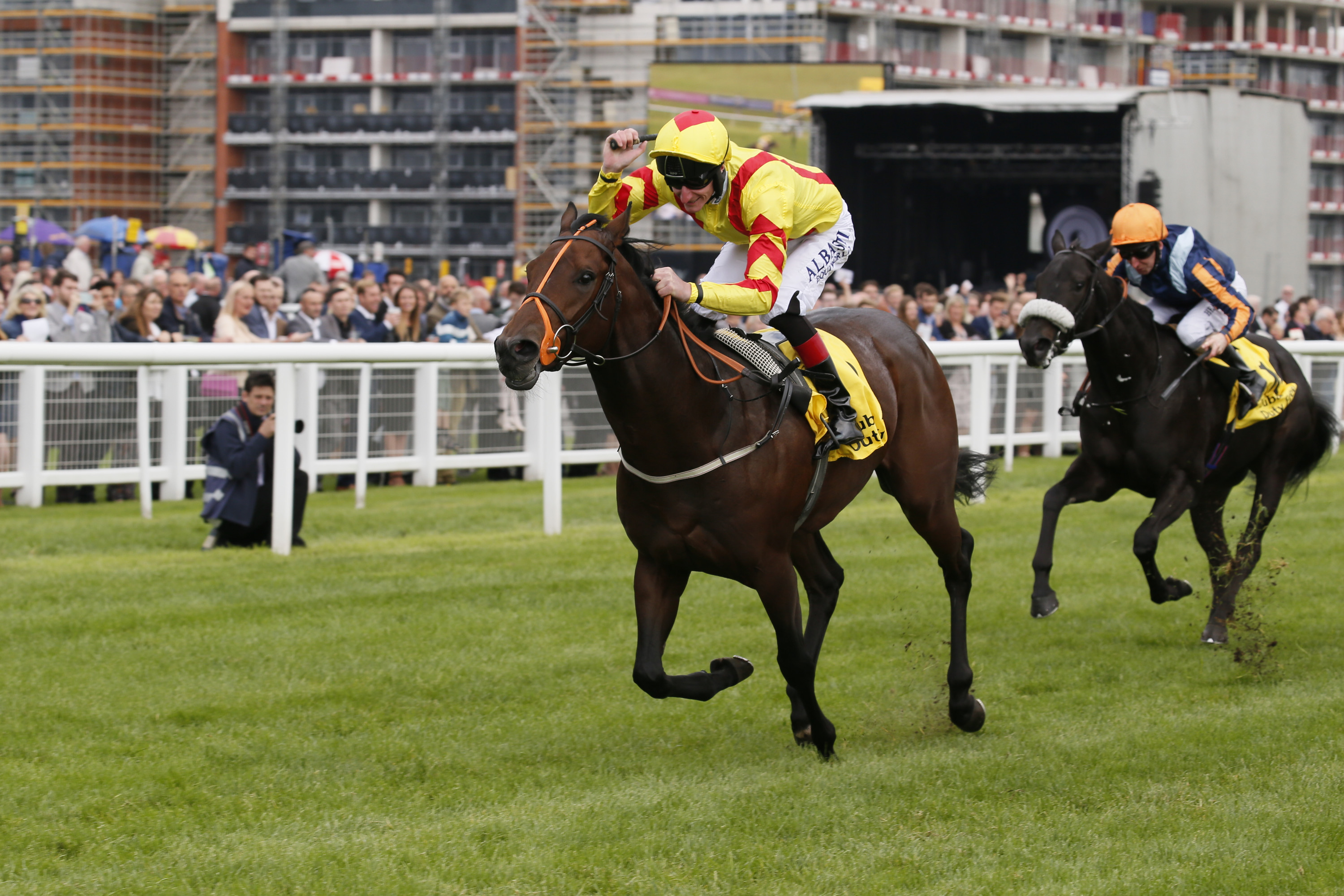 “I am not sure if he would get much further. He is blessed with quality and speed and the Commonwealth Cup at Royal Ascot could be the race for him next year.

“I am delighted for the owner Peter Ridgers, who has always been a great supporter of the yard through thick and thin. It is seven years to the day since we won the Ayr Gold Cup together with Jimmy Styles.

“We always knew he was a good horse, it was just keeping a lid on him. He is exciting horse and I am overjoyed. It is great to have another very good horse on our hands.”

Algometer (11/4, pictured) landed the 11-furlong £60,000 G3 Dubai Duty Free Legacy Cup 1.45pm, 5 runners) in the famous colours of owner Kirsten Rausing. The three-year-old grey son of Archipenko, making his first start since finishing seventh in the Investec Derby at Epsom Downs in June, stayed on resolutely to see off The Queen’s Dartmouth (13/8 Fav) by three-quarters of a length in the hands of Jim Crowley, who was registering a 17.75/1 double following his win on Swiss Storm in the opener.

Winning trainer David Simcock said: “It was a good performance from Algometer today.

“He had three quick runs earlier in the year and didn’t run badly in the Derby when he stayed on.

“Jim said today he was doing his best work in the last furlong. This ground brings out the best in him.

“It takes him a bit of time to get into top gear but then he is hard to pass. He idled a bit in front but picked up again when Dartmouth came to challenge him.

“He is likely to have one more start this year. We will look for a race abroad at the top-level. It won’t be Chantilly.

“He is a horse that is only going to get better next year.”

The five-furlong G3 Dubai International Airport World Trophy (3.25pm, six runners) saw four-year-old Cotai Glory (5/2) get the better of Alpha Delphini by a short-head with 13/8 favourite Ridge Ranger a further two and a quarter lengths back in third.

Winning trainer Charlie Hills reported: “I so nearly took him out today because of the ground but with so many horses already out of the race, we were enticed to run.

“I had a chat with George Baker (jockey) after the first race and we decided to run. I think he won today despite the ground and stuck his head out.

“We will now be looking at going to the Prix de l’Abbaye with him and with his owners (Kangyu International Racing & P Ma) being from Hong Kong, the invitational races in December could also be a possibility. I can’t wait to see him on fast ground.

“He is a great moving horse and should make a nice stallion one day. I thought he was going to come and win easily today but the ground was just against him.

“He is still a young horse and I don’t he can’t go and win one of the big Group One sprints.”

The big handicap of the day was the £75,000 Dubai Duty Free Handicap (2,50pm, 18 runners), which went the way of 6/1 joint-favourite Baydar in the hands of Josephine Gordon for trainer Hugo Palmer.

The three-year-old was completing a four-timer in the 10-furlong contest and stayed on gamely to outgun Scarlet Dragon (Eve Johnson-Houghton/Hollie Doyle) by half a length.

“As you can see, he is a light-framed horse. He is a horse with have looked after with a view to his career a four-year-old career.

“He has steadily improved this year and we could step him up in trip to a mile and a half. Not many horses win four handicaps in a row and we could look at running him in Pattern company.

“I will leave it to Hugo where he goes next. We know he handles ease in the ground.”

The opening race was division 1 of the Wedgewood Estates EBF Stallions Maiden (1.10pm, 11 winners) over seven furlongs which saw Swiss Storm (4/1) see off 10/11 favourite City Of Joy, providing jockey Jim Crowley with a valuable winner in his quest for a first Stobart Jockeys’ Championship.

The two-year-old son of Frankel, making his second racecourse appearance, was bought to the stands’ side by Crowley in the early stages of the contest and stayed on resolutely to score by a length and three-quarters. The winner is owned in partnership by Lordship Stud and trainer David Elsworth.

Elsworth said: “With due respect to the press, it was a misconception that this horse was outpaced first time out.

“He has bags of speed and I did have in the Mill Reef at one stage but with all the bonuses on offer, this race was almost worth as much.

“He will probably now go for the Racing Post Trophy (Doncaster, October 22) now.

“He is an exciting horse. I don’t over-train my two-year-olds but with this horse I did take the time to organise him as I thought he could win first time out. He was very relaxed first time out and only finished up being beaten four lengths.

“We are not getting carried away yet but he has always please us. He was a big foal and a big yearling. When I bought him, I couldn’t believe he didn’t go for more money.

“He has a lovely temperament and took everything very well today.”

Clive Cox went on to enjoy a 15.5/1 double when Graphite Storm (9/2) landed the seven-furlong Dubai Duty Free Nursery Handicap (4.00pm, 8 runners) in the hands of Ryan Moore. He stayed on resolutely in the final furlong to defeat 11/4 favourite Blushing Rose by a length and a quarter. 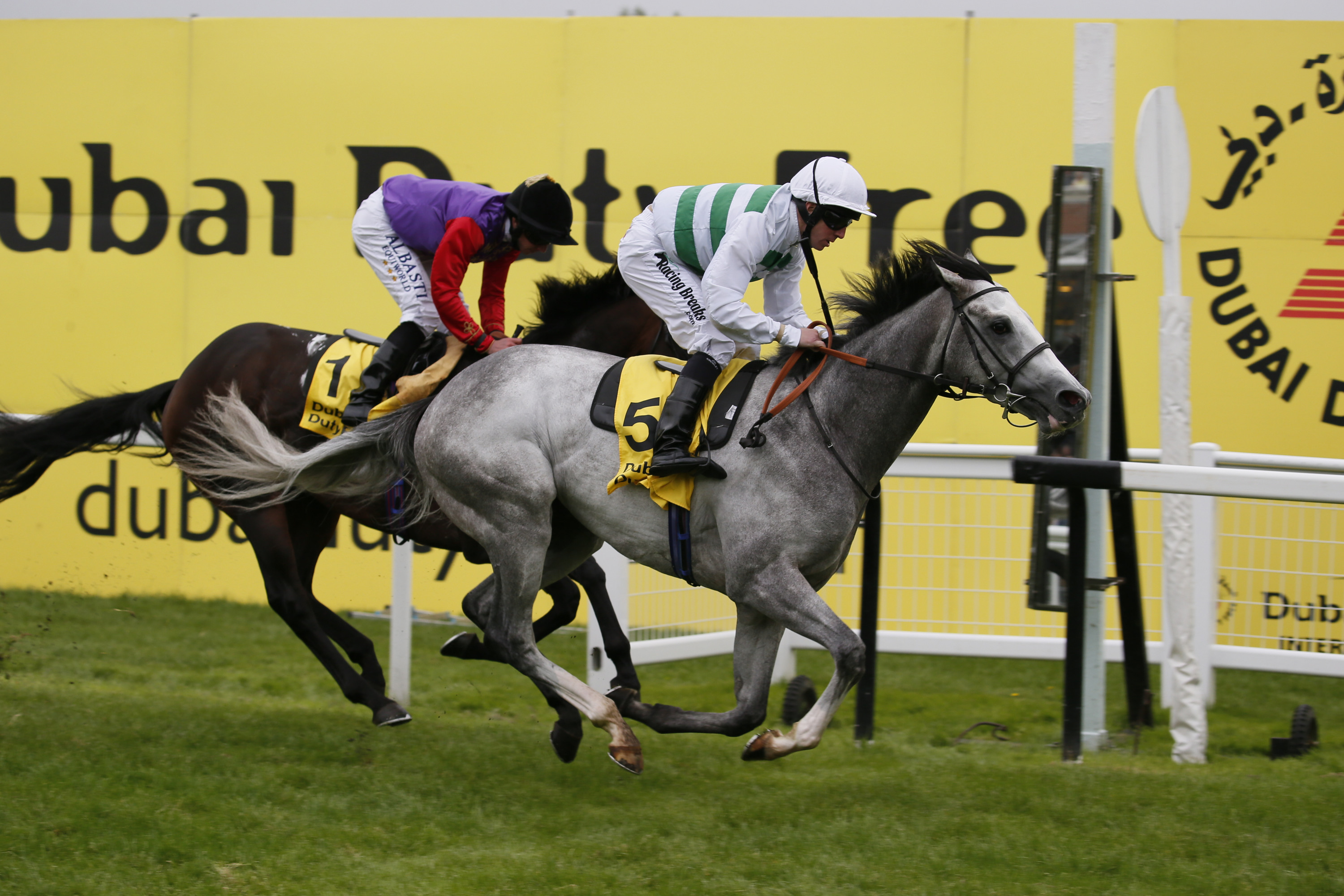 Cox said: “It has been a good day at the office. I am delighted for the owner Olive Shaw, who also has Kodi Bear. It is very pleasing that this horse is a home-bred.

“I don’t think he would want the ground any softer than today, so I don’t know if he will run again this season. He will make a nice three-year-old.

“I was going to run him over seven furlongs last time but the six-furlong maiden at Windsor looked a good opportunity. He was just very green first time out.”

Trainer Sir Michael Stoute and jockey Ryan Moore teamed up in the penultimate race of the card, the Heatherworld Stud Handicap over seven furlongs (4.35pm, 8 runners), with top-weight Aflame (13/8 favourite). The three-year-old Shamardal filly came with a strong late run in the final furlong to score by two and a half lengths from Izmir. It was a 13.4/1 double for Moore following his win in the previous race on Graphite Storm.

Sir Michael Stoute said: “She is a tough little thing. She is not big, but has got guts.

“She had not been on ground like before but she handled it.

“We could look at running her again this year and she will go back to her owner’s stud (Lady Rothschild).”

The day concluded with division two of the Wedgewood Estates EBF Stallions Maiden (5.05pm, 9 runners) over seven furlongs with Warrior’s Spirit (11/2) prevailing by a neck from 7/4 favourite Crystal Ocean under jockey Pat Dobbs.

Winning trainer Richard Hannon said: “This is a very nice horse that we have always thought a lot of.

“We will put him away now and he should be a lovely horse for next year. With all the bonuses on offer, this was a very valuable maiden to win.”

Newbury next races on Friday and Saturday, October 21 and 22, which brings the course’s Flat season to a close.