Flat racing returns to Newbury this Friday and Saturday, April 15 and 16, with the Dubai Duty Free Spring Trials Weekend.

The JLT Greenham Stakes is a leading trial for the QIPCO 2000 Guineas and the last horse to win at Newbury before going on to annex the Newmarket Classic was the great Frankel in 2012. Subsequent European champion miler Kingman took the honours in 2014, while last year’s winner, Muhaarar, became the best sprinter in Europe.

This year’s entries include a pair from leading Irish handler Jim Bolger – Group Two Futurity Stakes scorer Herald The Dawn and Round Two, who has not been seen since finishing seventh in the Group Two Coventry Stakes at Royal Ascot having won his first two starts. They are both owned by Godolphin, who could also be represented by Very Talented (Saeed bin Suroor), an impressive maiden winner at Doncaster in September.

Tasleet  (pictured) won the Listed Rose Bowl Stakes Sponsored By Compton Beauchamp Estates Ltd at Newbury on July 17 last year before chasing home Shalaa in the Group Two Richmond Stakes at Goodwood, also over six furlongs. The son of Showcasing subsequently landed a valuable sales race at York and went down by a nose to Sanus Per Aquam in the seven-furlong Group Three Somerville Tattersall Stakes at Newmarket.

Owned by Hamdan Al Maktoum, he is trained by William Haggas who said: “Tasleet will go for the JLT Greenham Stakes. He is a nice horse and has been working well. 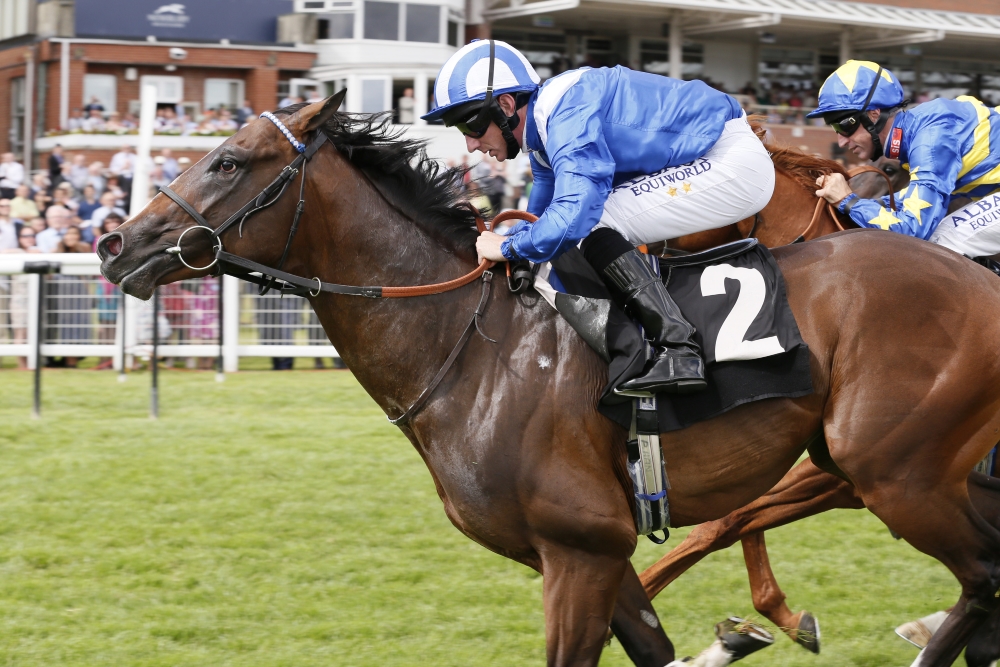 “I am pretty sure he will get the trip, but I am not sure he will like the ground. It will be the same for most of them though and they have got to start somewhere.”

Richard Hannon has entered Godolphin’s Log Out Island, runner-up in the Group Two Norfolk Stakes at Royal Ascot and winner of the Listed Two-Year-Old Trophy at Doncaster, and Palawan, who was twice third in Group Two company last year but finished a disappointing fifth on the All-Weather at Lingfield Park on Saturday.

An intriguing entry is the unbeaten Crazy Horse (John Gosden), who was last seen out when winning over the course and distance in the Group Three Worthingtons Whizz Kidz Stakes in October.

Besharah (William Haggas) is set to race beyond six furlongs for the first time in the £60,000 Dubai Duty Free Stakes, a trial for the QIPCO 1000 Guineas. The daughter of Kodiac was one of last season’s leading two-year-olds, capturing the Group Two Lowther Stakes at York and finishing a close third to Lumiere in the Group One Cheveley Park Stakes at Newmarket.

Haggas continued: “Besharah is doing nicely and is an intended runner in the Dubai Duty Free Stakes.
“She is very well but obviously there is a question mark about the trip. I actually don’t think she will mind the ground, but whether or not she gets the trip in testing ground, I don’t know.”

Dubai Duty Free sponsors the race for the 21st time this year, having first backed the Classic trial in 1996 when it was won by the outstanding Bosra Sham.

Trainer Ralph Beckett has won the Dubai Duty Free Stakes four times, most recently with Redstart last year. The Hampshire-based handler has two entries this year, both successful on their only starts – Little Avon and Nassuvian Pearl.

The third Group Three highlight on Saturday is the £60,000 Dubai Duty Free Finest Surprise Stakes (2.10pm) over a mile and a half, entries for which have been re-opened until 11.00am tomorrow. Saturday also features one of the most competitive handicaps of the early part of the season, the £50,000 Be Wiser Insurance Spring Cup (3.50pm, 31 entries) over a mile.