Young Rascal is the headline act as Newbury stages its final Flat fixture of the 2018 season this Saturday, October 27, Worthington’s Armed Forces Raceday.

For the 11th year running, Worthington’s Armed Forces Raceday will host the launch of The Royal British Legion Poppy Appeal for West Berkshire and the Vale of White Horse. The ceremony will commence at 12.25pm with a performance from The Waterloo Band and Bugles of the 7 Rifles before the ceremonial poppy is delivered by Scout helicopter from the Historic Army Aircraft Flight and presented by troopers from the Household Cavalry.

Young Rascal (William Haggas/Jim Crowley), who is bidding for his third win from as many starts at Newbury, faces 10 rivals in the £60,000 G3 Teddington Royal British Legion Stakes (2.20pm) over 12 furlongs.

The three-year-old Intello colt impressed when taking an 11-furlong maiden by five lengths on his seasonal debut at the Berkshire track in April and returned from a 112-day break to narrowly win the G3 Dubai Duty Free Legacy Cup over the same distance at Newbury’s latest fixture on September 22.

In between those two successes, he defeated Dee Ex Bee in the G3 Chester Vase in May, and came home seventh to Masar in the G1 Investec Derby at Epsom Downs the following month.

His trainer William Haggas explained: “Young Rascal has a [3lb] penalty at Newbury on Saturday, but should give a good account of himself.

“I wanted to go for the Prix Chaudenay after his last win, but the ground was too fast. He needs cut in the ground.

“He was not right for a long time after Epsom. We have nursed him back and don’t want to mess him up again.

“This will be it for the season.”

Regarding next year, Haggas added: “I think he is tailor-made for the Yorkshire Cup.” 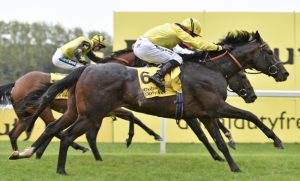 Young Rascal’s chief rival on ratings is G1 Irish St Leger third Weekender (John Gosden/William Buick), who drops in trip having raced over a mile and three quarters for much of 2018.

The only other three-year-old in the field alongside Young Rascal is recent Ascot G3 runner-up Communique (Mark Johnston/Franny Norton). He captured the £70,000 Al Zubarah London Gold Cup Handicap over 10 furlongs at Newbury in May, one of two victories for the Casamento colt at the track in 2018, with the other coming in the 12-furlong Dubai Duty Free Handicap on September 21.

Haggas also saddles Fanaar (Jim Crowley) in the £40,000 G3 Molson Coors Stakes over seven furlongs, the feature race for two-year-olds at 2.50pm. The Dark Angel colt is drawn one of the 11 runners.

Haggas said: “Fanaar is all set for the weekend. He worked very nicely on Wednesday morning. He looks great and is moving great.

“He was very unfortunate in the nursery at Doncaster, which has worked out very well with Arctic Sound winning a G3 afterwards.

“Fanaar was raised 11lb for that, which has forced my hand a bit, but he is a useful horse and I wanted to give him a try in a Group race.”

The opposition is led by Chairmanoftheboard (Mick Channon/Charles Bishop), who created a big impression on debut when taking a Goodwood novice auction race by eight lengths on October 14.
Azano (Kieran Shoemark) enjoyed the give underfoot when scoring by five lengths at Yarmouth on October 15, leaving his debut effort at the same track well behind. His trainer John Gosden has won the Molson Coors Stakes three times, making him the most successful current handler in the race.
G2 Royal Lodge Stakes fourth Victory Command (Mark Johnston/Franny Norton) and impressive Kempton Park victor Almufti (Hugo Palmer/Jason Watson) also feature among the 11 runners.

Newbury’s eight-race programme starts at 1.10pm and ends at 5.05pm.

The going is currently Good to Soft, Soft in places.

The Newburys announced on Saturday

At the end of another successful Flat season at Newbury, the racecourse will once again celebrate some of those who have lit up the campaign with starring performances, with its own end-of-season awards, The Newburys in association with Conundrum Consulting Ltd.

William Haggas is already confirmed as the leading trainer at the Berkshire track having accrued a total of 14 wins at a strike rate of 38% since the start of the season.

James Doyle is the leading jockey with a total of 13 wins, having partnered a number of Haggas-trained runners to victory.

Still in contention is the leading owner, which is currently between Godolphin with five winners and Sheikh Hamdan Bin Rashid Al Maktoum with four winners. Both have runners over the next two days.

Leading apprentice will also come down to the wire between Nicola Currie and Callum Shepherd with two wins apiece. Currie is scheduled for two rides tomorrow and Shepherd is booked for four on Saturday.

A special prize will be awarded to the yard which has won the most Best Turned Out awards over the course of the last seven month and this season goes to Johnston Racing who currently have been awarded Best Turned Out on nine occasions.

Finally, racing enthusiasts had their chance earlier this week to vote for their ‘Moment Of The Season’ from a shortlist of six.

Over 50% of the votes went to the brilliant Sea Of Class, who was unbeaten in two starts in Listed company at Newbury, taking the Haras De Bouquetot Fillies’ Trial Stakes in May and the Johnnie Lewis Memorial British EBF Stakes the following month. She went on to record G1 victories in the G1 Irish Oaks and G1 Yorkshire Oaks before a defeat by Enable in Europe’s most prestigious middle-distance race, the G1 Qatar Prix de l’Arc de Triomphe at Longchamp earlier this month.

All winners or their representatives will be awarded with momentos during the afternoon.