Getting to know Keith Ottesen… 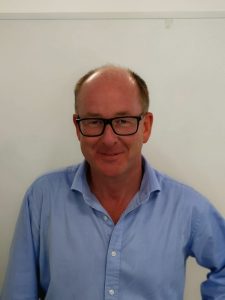 Keith Ottesen officiates as clerk of the course at Newbury for the first time tomorrow, having replaced long-time clerk Richard Osgood who stepped down at the end of last year after nearly 40 years of service.

Keith joined Newbury in August from Chepstow, one of a number of tracks he has been responsible for over the last 15 years. He has extensive experience in the racing industry having worked in a number of racing stables and studs around the world before taking his first racecourse job.

How did you get into horse racing?

We always had horses around at home and I did show jumping and eventing when I was young from which I developed a huge interest in horse racing and the thoroughbred. After university I went to work for a couple of small breeders and would produce their horses for yearling sales. From there I went to the National Stud to complete a stud management course and then to the Head family’s Haras du Quesnay farm in Normandy. I left there when I got a job as assistant trainer to Michael Bell. I spent a couple of years in Newmarket before moving to the US to work for Christophe Clement on the East Coast. I would ride Tikkanen [Breeders’ Cup Turf winner] every day while I was there. I did some pinhooking as well.

What was your first racecourse job?

Working at the National Stud and in America I was always at or around tracks and in 2003 I applied to be a clerk of the course. That was at Uttoxeter for Northern Racing at the time. In January 2010 Chepstow became my base. At the same time I also looked after Hereford until it closed temporarily in December 2012. After that I took on Bath for a season before adding Worcester, then took on Ffos Las with Chepstow and Worcester. I filled in at Windsor for a while in 2017 too. I came to Newbury in August before taking over fully from Richard in January.

What has been your best moment in racing?

Being appointed clerk of the course at Newbury has to be up there. In terms of racing experiences Tony McCoy won his first Welsh National on Synchronised for Jonjo O’Neill in my first year at Chepstow which was a great highlight. Then Native River won the same race after winning the final Hennessy here at Newbury. Both were to become Cheltenham Gold Cup winners.

What are you most looking forward to as clerk of the course at Newbury?

I look forward to racedays mostly as that is when we put on a show and the future stars turn up. It’s great to still be able to work closely with Flat and Jumps horses and see which of them will go on to become champions.