There are 24 entries for the StanJames.com Supporting Greatwood Gold Cup. Champion trainer Paul Nicholls has dominated the contest since its inception in 2004, scoring seven times including with subsequent Grade Two winner Sound Investment last year (pictured below in purple). His two entries this year are Art Mauresque, a winner at Cheltenham in October and a close sixth in the Paddy Power Gold Cup at the same course the following month, and smart novice Sametegal, who was runner-up to More Of That at Cheltenham in December. 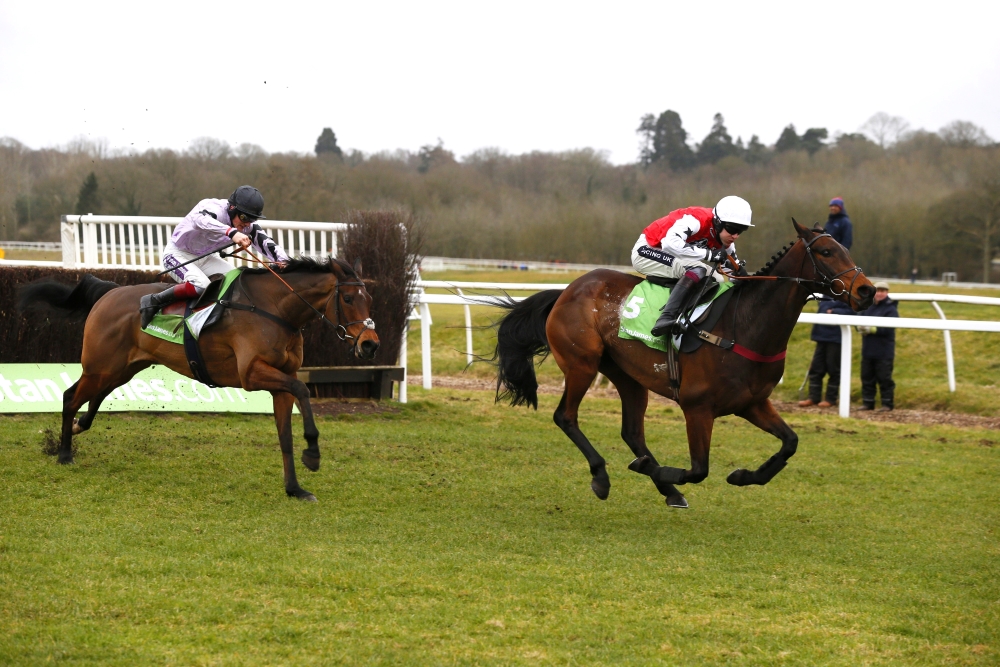 The race is set to see a challenge from France with trainer Emmanuel Clayeux having entered both Pythagore and Vicomte Du Seuil. The 11-year-old Pythagore was last seen out when scoring in a Listed hurdle at Pau on February 7 and is also a multiple winner over fences, most recently in a Grade Two contest at Auteuil on November 29.

Vicomte Du Seuil, a seven-year-old, won a chase at Pau in December and ran most recently when runner-up in a hurdle at the same venue on February 2. Clayeux could also be represented in the Ladbrokes Supporting Greatwood Handicap Hurdle (2.50pm) by Bonne A Marier, who has won over both hurdles and fences.

Clayeux commented today: “Pythagore is a very nice horse who has won some important races in France and now we would like to continue the adventure with him in England

“I first went to Newbury last June when I was visiting Lambourn and, as it is quite flat and also left-handed, I think this will suit him well.

“He adapts easily to different racetracks, although we didn’t enter him elsewhere, say at Cheltenham, because we wanted to give him a chance to adapt first over British fences and see how he goes before deciding anything.

“He is a horse that runs well fresh, and has come out of his run at Pau very well.

“Vicomte du Seuil is obviously less exposed at this level, but he also adapts well to new places and is probably more likely to make the trip to accompany Pythagore than Bonne A Marier.”

Clayeux trains at Saint-Voir, near Moulins in central France, and has 75 horses in training. He finished seventh in the French Jump trainers’ table last year and went close to landing a winner at the Cheltenham Festival in 2013 when Sirene D’Ainay was the length and a half runner-up to the mighty Quevega in the David Nicholson Mares’ Hurdle.

The weights for the StanJames.com Supporting Greatwood Gold Cup, issued tomorrow, are likely to be headed by Argocat (Nicky Henderson), a triple Grade Two winner in Ireland.

Colin Tizzard’s horses are running at the top of their form and the stable could be represented by Ultragold, who won impressively at Wincanton on February 20. Another interesting contender is Le Vaticane (David Pipe), who was third in the Sir Peter O’Sullevan Memorial Handicap Chase at Newbury in November.

Greatwood Gold Cup Day runs from 1.45pm through to 5.10pm, with a charity race at 5.35pm. Racegoers can learn more about Greatwood, a unique charity based near Marlborough which provides fulfilling futures for former racehorses and teaches emotional literacy and life skills to children and young people with special educational needs.

There is also action at Newbury Racecourse on Friday, March 4, Mencap Charity Day, with a seven-race card running from 2.20pm through to 5.35pm.