The end of an era will be reached at Newbury on Saturday, December 29, Betway Challow Hurdle Day, when Clerk of the Course Richard Osgood officiates at the track for the final time – 99 years after the first member of the Osgood family joined the racecourse staff.

The day will be marked with the first race being renamed in his honour as the Betway ‘Farewell to Richard Osgood’ Juvenile Hurdle.

Richard was born and bred on the racecourse site, becoming assistant to his father Frank, who was part of the management team from 1947 until he retired in 1990, and latterly estates manager and clerk of the course.

From Arkle to Frankel, Richard has seen all the greats who raced at Newbury and with former Newbury Chief Executive Mark Kershaw, helped pioneer the introduction of frost covers which have been pivotal in keeping racing going during the harshest points of the winter.

Recalling memories over the last 40 years at the racecourse, Richard has seen all the outstanding races at Newbury and it will be with fond sadness that he steps away from somewhere that has been not just a home but a workplace since 1979 and where his great uncle John Osgood was the manager in 1919.

Richard said: “I was born on the place.

“My mother and father lived here and I have lived onsite for 56 years. As a child I was on my bicycle mucking around the stands. I was born and bred here; it was a fantastic childhood.”

During his time at Newbury, Richard saw many of the greats grace the track among them the legendary Arkle, who carried off the Hennessy Gold Cup in 1964 and 1965.

He continued: “Arkle was my hero as child.

“He was the horse I always watched when I was young. Some of things he did were amazing. I always followed him and Mill House and on the Flat there was Mill Reef and Brigadier Gerard.”

Of the more recent stars to perform heroics at Newbury, he said: “I have got to say the way Denman won his second Hennessy was one of the best I’ve seen, but I was also lucky enough to see Frankel win here in the Lockinge, plus Hawk Wing in the same race and also watch Nashwan work.

“The Major [trainer Dick Hern] used to like to bring Nashwan down here for his final gallop before a big race. I just loved the way the horse moved with such a flowing action.”

Richard’s enduring legacy followed on from the aftermath of the 2006 Super Saturday meeting, which was the victim of a late abandonment on the day of the fixture because the course was frozen.

He recalls: “We had covered all the take-offs, landings and vulnerable areas as usual, temperatures were rising and the frost was coming out of the ground, but then we got cloud and temperatures dropped again. We had an inspection and it wasn’t raceable. We wanted to give it half an hour longer but racing was called off when everyone was there. We lost the day but what it did do was make us think about things.”

With similar weather threatening the next meeting in March, Richard and then managing director Kershaw took the decision try to cover the whole course and invested in fleece covers, similar to those used by fruit farmers. As a result of their success, the investment has been copied by other major courses.

“That has got to be my proudest achievement,” says Richard.

“I had letters from all over the world and from people who didn’t think it could be done. Simon Claisse was on the phone from Cheltenham asking how we had done it. All the other clerks then had to look into it. We completely changed the way things were done.”

Richard hands over to Keith Ottesen on January 1, 2019, but with wife Cilla continuing at Newbury as membership secretary the family connection will not be completely severed.

He concluded: “I have immensely enjoyed almost 40 years here and have been incredibly lucky to have played a small part in some highly memorable racing moments.

“I have been fortunate enough to have met and worked with so many brilliant people.

“It will feel sad to be leaving, but I know I put everything into it and have left my mark.” 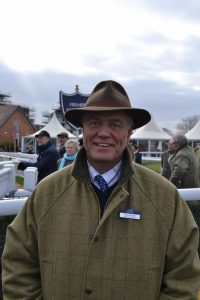 Julian Thick, Chief Executive of Newbury Racecourse, commented: “It would be hard to find someone more dedicated to Newbury than Richard over nearly 40 years.

“I would like to thank him for all his hard work and wish him the very best in the future. Thanks to Betway for allowing us to rename the first race in honour on Challow Day which will mark the end of an era.”

For further information or to book tickets click here.