The two day meeting at Newbury Racecourse culminated with an impressive win by the Godolphin trained Farhh in the Group 1 JLT Lockinge Stakes.  Having finished 2nd in four Group 1 races last year, the bridesmaid finally became the bride at Newbury today, winning by 4 lengths in front of Sovereign Debt and Aljamaaheer.  Defeated twice by Frankel last season, Farhh will undoubtedly be a dominant force in mile and 10 furlong races this summer with his jockey warning ominously for his opponents that Farhh should come on for the run. 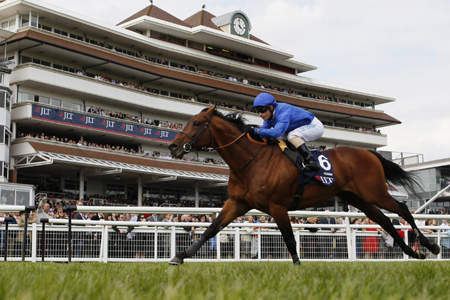 Godolphin have a strong association with Newbury’s showpiece race with four previous winners and their racing manager, Simon Crisford, who had been cautious that the horse may need the race beforehand, said afterwards, “He won really well, it did come as a surprise as he’s been a difficult horse to train.  Particularly after the last few weeks, it’s a real boost for the yard.”

The win gave delighted jockey Silvestre de Sousa his first British Group 1 win.  He said, “He definitely deserved to get his head in front.  He travelled so sweetly and I hope there’s more to come.”

Godolphin also gained Listed race success earlier in the day with Willing Foe in the JLT Aston Park Stakes, sweeping to the front in style and winning by six lengths.

Earlier in the day, the Betfred Mobile Sports London Gold Cup, a race which often produces Group race winners, was won by the Ed Dunlop trained High Troja at odds of 25-1.