Colourful owners group The Melbourne Ten, who are dedicated to having fun in racing, are pursuing a major windfall at Newbury Racecourse on Saturday when their two-year-old filly Emten lines up as one of the leading candidates for the £250,000 Weatherbys Super Sprint.

The syndicate, formed by Ian Barratt with a group of friends from Newbury and easily recognisable from their orange and blue blazers, have travelled the world to experience many of the biggest racing and sporting events on the planet.

This year they put Saturday July 20 on their schedule, Weatherbys Super Sprint day at their local track, where they are set to have three runners headed by Emten, a first-time out winner at Windsor who finished fifth in the Group 2 Norfolk Stakes.

Emten, trained in Lambourn by Jamie Osborne, was among 25 horses declared for the Weatherbys Super Sprint for which the hot favourite is Norfolk Stakes runner-up Ventura Rebel, from the stable of three times race winner Richard Fahey.

Ventura Rebel is one of four who will represent Fahey, successful in 2013, 2015 and 2017, and whose team is completed by Mighty Spirit, Show Me Show Me and Baileys In Bloom.

Richard Hannon, who has won the race twice including last year with Ginger Nut and whose father Richard snr captured the prize seven times, has declared four; Audio, Separate, Orcasio Cortez and Bacchalot, and trains one of the two reserves Dreamy Rascal.

Emten, who will be ridden by Nicola Currie, came from an unpromising position at Ascot, recovering from last position a furlong and a half out to finish four and a half lengths behind A’Ali.

Osborne said: “We probably made a duff decision in running in the Norfolk and not the Queen Mary. The fear was the ground and we were trying to guess what was going to happen. I thought Queen Mary day would be in rain and she would struggle to get through it but it could be drier on the Thursday. It didn’t really turn out that way.

“So she ran in the wrong race against the colts but she ran respectably. I am convinced she is a good filly. I would have liked to get another run into her before Ascot but she had a niggle that stopped us doing that.

“For a second run a long time after the first it was a strong performance. She will have learned from that again. My horses improve from their runs so they have to be good to win first time out. On what she did at Ascot she has got it to find, especially with Richard Fahey’s, but I’d like to think there has been improvement since Ascot.”

Osborne said the Weatherbys Super Sprint, which is restricted to horses who cost £63,000 or less at public auction, had long been a target. Weights are determined by sale price and Emten, who cost £36,000, carries 8st 8lb.

“When a horse starts showing you unusual speed in the first part of the year and they didn’t cost a fortune you are always thinking Super Sprint because of the phenomenal pot, £122,000 to the winner,” said Osborne. “This was a very obvious target.

“The Melbourne Ten is all about days out so from a long way back we have targeted this day. So Cliffs Of Capri will run in the Grundon Recycling Handicap and Jukebox Jive in the Marsh Cup.”

Osborne will have a second string in the Weatherbys Super Sprint in Seraphinite, who finished down the field in the Albany Stakes at Ascot.

“She is Emten’s work partner,” he said. “She is rated 74 but would be equally as quick at home but she hasn’t yet shown it on the track. I think she could run better than her price dropping back to five furlongs.”

The Weatherbys Super Sprint is the feature event on a card which also stages the second running of the £100,000 Marsh Cup, formerly named the JLT Cup. The extended 2m handicap was won 12 months ago by the heavily backed Stratum, trained by Ireland’s champion jumps trainer Willie Mullins for owner Tony Bloom, the owner of Brighton football club, who will be represented by Withhold, who captured the 2018 Northumberland Plate and 2017 Cesarewitch.

Among a 16-strong field are Northumberland Plate and Vase winner, Who Dares Wins and Carnwennan, Making Miracles, winner of the Chester Cup in May, and Ascot Stakes winner The Grand Visir. 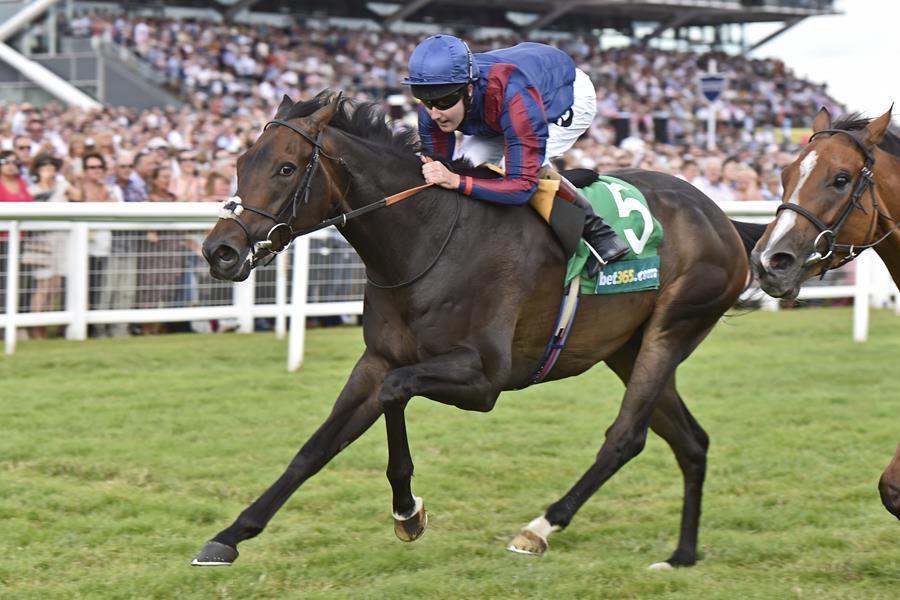 Three times Group 1 winning sprinter The Tin Man drops down in class to contest the Group 3 bet365 Hackwood Stakes, a race he captured three years ago. He heads a field of ten that also include course and distance winner Khaadem, who landed the Listed Shalaa Carnarvon Stakes in May before running tenth in the Commonwealth Cup, and Waldpfad, a Group 3 winner from Germany.

The Tin Man’s trainer James Fanshawe said: “He won this in 2016. He ran a very good race at Ascot in the Diamond Jubilee where he just missed the break and rather than rushing on to another Group 1, we have dropped our sights a bit to get him back on track.”

Two days of racing at Newbury begins on Friday with seven races whose features are the Listed Irish Thoroughbred Marketing Rose Bowl Stakes for two-year-olds and the £40,000 Ross Brooke Chartered Accountants Fillies’ Handicap.

The current Going report ahead of Friday and Saturday is Good, Good to Firm in places following 3.5mm of rain early morning on 18/07. Watering has ceased. The forecast shows scattered showers on Friday becoming heavier overnight into Saturday morning. Sunny spells later on Saturday, max temps around 20/21 degrees.

Legendary singer Tom Jones will take to the Party in the Paddock stage after racing on Saturday to perform a 90-minute set. Grandstand tickets are still available to purchase by visiting newburyracecourse.co.uk