Outsiders claimed both of the feature races on Worthington’s Armed Forces Day, on Saturday, October 22, with Duretto (pictured below) and Pleaseletmewin scoring at big prices on Newbury’s final Flat fixture of the year.

The four-year-old, who had run consistently well throughout this season without winning for owner/breeder Lord Blyth, stayed on strongly to take the lead from Mountain Bell (9/1) in the closing stages to score by half a length, with Kings Fete (6/1) a further three-quarters of a length back in third.

Balding commented: “Duretto loves to get his toe in, while he also benefited from having a strong gallop to aim. We decided to leave the hood off today because he is growing up mentally. He has settled well and it might have just given him a bit more at the finish.

“The Blyths have been fantastic owners, who have supported us every year, so I am thrilled for them.”

Trainer Ralph Beckett, responsible for Mountain Bell, and jockey Fran Berry teamed up to record a 75.5/1 double in the first two races headed by Pleaseletmewin, who bounced back to form with an impressive display in the G3 Worthington’s Alzheimers Society Stakes (1.45pm).

The son of Power was sent off a 16/1 chance after coming home seventh in the G3 Autumn Stakes at Newmarket earlier this month and raced prominently throughout the seven-furlong contest before quickening clear inside the final furlong to beat 20/1 shot Kings Gift by two and a quarter lengths. 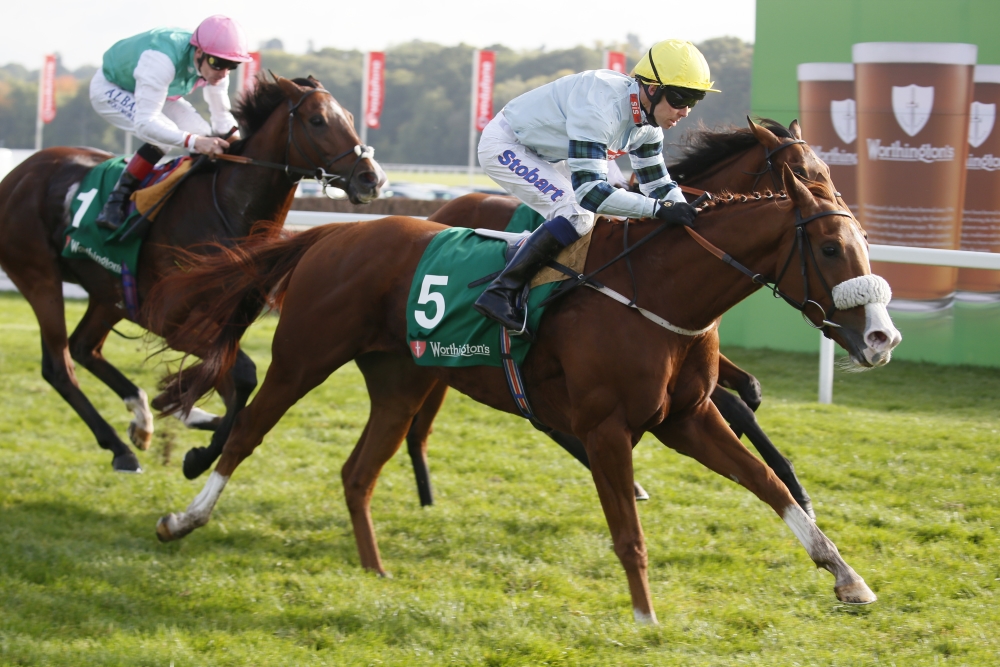 Debutant Crimson Rock, who cost US$1,000,000 as a yearling, also struck for the same trainer/jockey combination in the opening division one of the Conundrum HR Conundrum HR Consulting EBF Stallions Fillies’ Maiden (1.15pm) over a mile.

The 7/2 joint-favourite stayed on strongly and prevailed by a neck over fellow market leader Elas Ruby, with Serenada back in third as fancied horses dominated the finish.

Beckett commented: “We were delighted with Crimson Rock. She was purchased to be a broodmare and has now won first time out, which is great.

“She appreciated the cut in the ground but had to do it the hard way because she was racing away from the other two fillies.”

William Haggas sent out the first two home in the seven-furlong Listed JLT Stakes (15.20pm) as 4/1 chance Cristal Fizz ran on well to collar 6/4 favourite Glitter Girl inside the final furlong to score by a cosy neck.

What About Carlo (7/1) registered his first win since taking the Dubai Duty Free Handicap at Newbury 13 months ago when storming to a decisive victory in the 10-furlong Bathwick Tyres Handicap (2.50pm).

Eve Johnson-Houghton’s five-year-old travelled well throughout and bounded clear in the closing stages under Tom Queally to score by a length and three-quarters over Blair House.

Johnson-Houghton, who is based locally at Blewbury near Didcot, said: “What About Carlo seems to have won every year. He loves Newbury and always seems to run his best races here.
“We are really pleased with him and he is a stable star. He enjoys life and is very spoilt at home but he always repays us in the end.

“He schooled over hurdles with Henrietta Knight and is ready to go. She tells me she is very pleased with him. He might easily go for a novice hurdle back here at the bet365 Festival meeting and I should think that we might start him off over two miles.

“If he doesn’t like hurdling, we have lost nothing but, if he loves it, then we will do it because he really needs cut in the ground. We could be a spring and autumn horse on the Flat, a winter horse over hurdles and we could give him the summer off.”

The Kevin Ryan-trained Fields Of Song repelled all challengers to take the six-furlong Sir Gerald Whent Memorial Nursery (4.30pm) under Shane Gray. After taking up the running over a furlong out, the 11/2 chance rallied well to beat Letmestopyouthere by a neck with the same margin back to Jet Setter in third.

Di Alta also stayed on resolutely to claim a debut victory in division two of the Conundrum HR Conundrum HR Consulting EBF Stallions Fillies’ Maiden (3.55pm). Sent off a 20/1 shot, the Ed Walker-trained filly responded gamely to Thomas Brown’s urgings to edge out Dal Riata by a neck, with a head back to Dynamic in third.

Always towards the head of affairs, the three-year-old daughter of Tamayuz kicked clear entering the final quarter-mile and found plenty to prevail by two lengths over Links Drive Lady.

Also on the day, Eddie Greatrex scooped the 2016 Conundrum HR Champion Apprentice Award. The award, for the apprentice who rides the most winners during the Flat season at Newbury, was inaugurated in 2015 to recognise the hard work and dedication of apprentice jockeys and is sponsored by Conundrum Consulting.

Eddie Greatrex took the 2016 prize and a cheque for £1,000 having ridden 4 winners, collecting his award from Conundrum HR Managing Director and Founder Hugh Nickerson and renowned sculptor Mark Coreth, who is responsible for the statue of Frankel now on display at York, Ascot and Newmarket. Conundrum HR also made a £250 donation to the Injured Jockeys Fund.