A sell-out crowd of 20,000 was on hand to see an excellent seven-race card, with acclaimed singer-songwriter Craig David delighting racegoers after racing as part of the first “Party In The Paddock” of Newbury’s 2018 season.

Hannon’s father Richard snr became synonymous with the £250,000 Weatherbys Super Sprint (3.35pm) thanks to his record seven wins in the feature five-furlong contest for two-year-olds and Hannon jnr gained his second victory in the unique race with 16/1 chance Ginger Nut, who was backed in from 25/1 and emerged from stall 19. The winning time was 1m 1.85s on turf described as Good to Firm.

The Sir Prancealot filly, part-owned by Hannon alongside long-standing patrons Chris and Jenny Powell, was held up towards the rear of the maximum 25 runners by Harry Bentley and ran on strongly between runners to take the lead entering the final half-furlong.

Ginger Nut, who cost £23,000 as a yearling and therefore received a low weight, ran on well to beat 50/1 outsider Moojim (Bryan Smart/Graham Lee, drawn 22) by a neck, with 9/2 joint-favourite Kinks (Mick Channon/Joe Fanning, drawn 10) finishing a half-length back in third after a troubled passage. 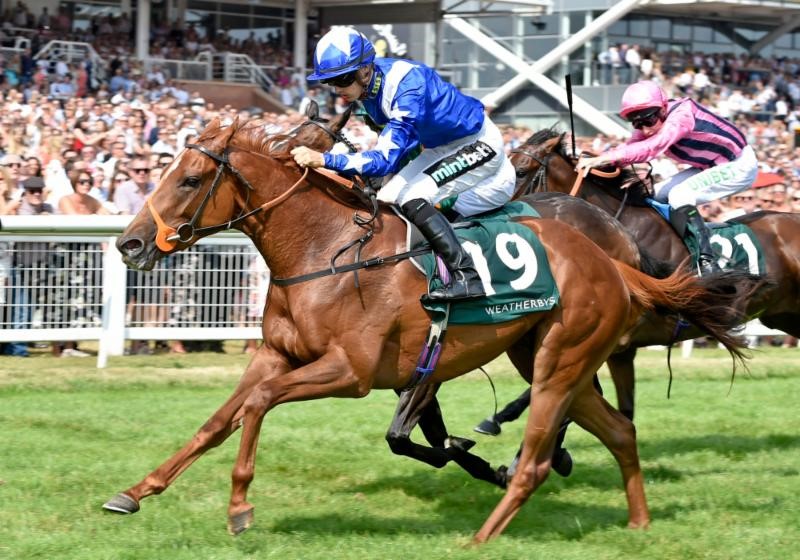 Hannon, who sent out European champion two-year-old filly Tiggy Wiggy to win the 2014 Weatherbys Super Sprint, said: “We were a little disappointed with Ginger Nut on the first few times she went to the races, when she went off a little bit too quick, but we tucked her in today.

“This was the plan from the moment we bought her. She didn’t have an owner, so Chris and Jenny came in and I said that she would be an ideal filly for the Weatherbys Super Sprint.

“I said that I would probably have a quarter-share and, the next thing I knew, Chris had put me down for a half-share, so it has backfired big-time on him!

“It’s great for Chris and Jenny, who are big supporters of ours and have horses with a lot of trainers. They are good investors and good people, which is what this race is all about. They have had their payday with a lovely, fast filly and it has all gone well.”

Harry Bentley commented: “I am really, really pleased with Ginger Nut. She has dug deep and travelled really well for me. It is very tactical in these sort of races and getting a run is of the utmost importance, but we got a nice run through and she did it well.

“Any jockey would agree that luck plays a massive importance in these races – things have to pan out and the gaps have to open. Luckily, I was following the right horses and we got there when it mattered.”

The Hamdan Al Maktoum-owned grey colt, by Dark Angel and drawn one of the 10 participants, settled behind the leaders and ran on strongly to hit the front entering the final furlong before gamely seeing off the late challenge of 11/4 favourite Projection (Roger Charlton/Harry Bentley) for a head victory in 1m 11.19s, with a further neck back to 9/1 chance Dream of Dreams (Sir Michael Stoute/Andrea Atzeni).

Hannon added: “Yafta is a real gentleman and a lovely horse to have around. He is only three and has had some hard races – he has always finished first or second and ran the race of his life today.

“I think his trip is probably seven furlongs and he might be better with a bit of give in the ground. He is a lovely horse and I am delighted to have a winner while Sheikh Hamdan is here.”

Jim Crowley remarked: “Yafta hasn’t been out the first two all season and tries his best. It is lovely to get a nice win out of him.

“He does nothing wrong and is progressing all the time. I was a little bit concerned that the ground might be a bit quick for him today but he has handled it really well.

“The race set up nicely for him – he got a nice tow and a good passage – and he is such a dude of a horse, one of my favourites.”

Crowley went on to record a double for owner Hamdan Al Maktoum in the closing seven-furlong £20,000 Grundon Recycling Handicap (5.20pm) as the William Haggas-trained Mankib (9/2) got up late to beat Top Score (Saeed bin Suroor/Jason Watson).

Owner Tony Bloom, who also has recent Northumberland Plate hero Withhold, saw his colours carried to victory in another major staying handicap as well-backed favourite Stratum stormed to victory in the first running of the £100,000 JLT Cup (2.25pm) with 16 runners.

The 11/4 market leader, trained by Ireland’s champion Jump trainer by Willie Mullins, travelled strongly throughout the extended two-mile contest in a first-time hood and never looked in danger after taking up the running over a furlong from home, going on to score by three lengths under Robert Winston in 3m 32.57s.

Winston reported: “They went a very steady pace on Stratum’s last start in the Ascot Handicap and he was very keen. Willie said that he had worked really well with a hood on at home and he was wearing a different bit today as well, while the stronger gallop also helped.

“He was in a lovely position and settled the whole way. He has got pace, stays really well, but you would like to win another big handicap before considering the Melbourne Cup (G1, Flemington, Australia, November 6). I know the aim will be the Ebor Handicap (York, August 25) next for him and we will see from there.”

One-time Classic hope Emotionless gained his first success since taking the G2 Champagne Stakes at Doncaster in September, 2016, when making all of the running to win the opening £37,000 Listed bet365 Stakes (1.50pm) over 10 furlongs for trainer Charlie Appleby.

The Godolphin runner, sent off the 11/4 favourite on his first appearance since finishing second in a G3 race at Meydan, Dubai, in January, found plenty in front for William Buick to beat the staying-on Desert Encounter (9/2, David Simcock/Andrea Atzeni) by two lengths in 2m 4.84s.

Alex Merriam, assistant trainer to Charlie Appleby, said: “It was very nice to get back Emotionless on track. It has been a little while since he ran in the UK and Charlie has been very patient.

“Australia has been mentioned as possibly on the radar for him, although he has been off for a while and we will see how he comes out of the race before making a plan.”

William Buick commented: “Emotionless has always been a talented horse and he stays this trip, which is always a positive. He stretched nicely in front and really picked up – it’s nice to get him back.

“Charlie and the team have obviously done a great job and it would be lovely for Emotionless if he could go onwards and upwards from this. I am sure Sheikh Mohammed and Charlie will come up with a plan for him.”