The most valuable and prestigious Jump race of the season at Newbury, the £250,000 G3 Ladbrokes Trophy, has attracted 56 quality entries for its 2018 renewal which takes place over three and a quarter miles on Saturday, December 1, day two of the Ladbrokes Winter Carnival.

Heading the betting market for the handicap chase at 8/1 with sponsor Ladbrokes is the progressive grey chaser Terrefort (Nicky Henderson).

The exciting five-year-old arrived at Seven Barrows, Lambourn late last year and has succeeded on three of his four starts in Britain so far, including G1 victories at Sandown Park in the Scilly Isles Novices’ Chase over two and a half miles in February and at Aintree on his most recent start in the Mildmay Novices’ Chase over three miles and a furlong in April.

Five-year-old Janika and nine-year-old Vyta Du Roc, along with Terrefort, are owned by Simon Munir and Isaac Souede who retain jockey Daryl Jacob.

Janika is a multiple winner in France, but has yet to start in Britain, while Vyta Du Roc was lightly-raced last season and not seen out after scoring at Cheltenham on New Year’s Day.

Willoughby Court (Ben Pauling, 16/1) was an impressive winner at the Ladbrokes Winter Carnival in 2017, when he upset the odds-on Yanworth to land the G2 Ladbrokes Novices’ Chase over two and a half miles.

The seven-year-old, owned by Paul and Clare Rooney, was restricted to just one further outing last season, but trainer Ben Pauling is eagerly-anticipating Willoughby Court’s return to action, with the Ladbrokes Trophy the possible target.

Pauling revealed: “Willoughby Court is in good form at home and we are really happy with him.

“We have entered him in the Ladbrokes Trophy and it is certainly something we are considering.

“He looks in great order and has done well over the summer.

“He had a small wind operation as there was something not slightly right when he was third at Cheltenham on his last run.

“He obviously missed the Cheltenham Festival with a foot problem, but he is over that and is in good order.

“We had hoped to go for the Colin Parker Chase at Carlisle this weekend, but he picked up a little cut in his box. It is only superficial, but he will not quite be ready for Sunday.

“We are looking forward to this season.”

Ireland’s champion Jump trainer Willie Mullins saddled Total Recall (16/1) to success in the 2017 edition of the famous three and a quarter mile handicap chase. Total Recall was the first Irish-trained success of the Newbury race since Bright Highway in 1980.

Total Recall is one of eight entries for Mullins in 2018 and could bid to become the fourth dual winner of the Ladbrokes Trophy following Mandarin, Arkle and Denman.

Kemboy is owned by the Supreme Horse Racing Club, in partnership with Brett Graham and Kenneth Sharp.

Steve Massey of the Supreme Horse Racing Club reported: “Kemboy is in good order and Willie Mullins is really happy with him.

“He has summered really well and we can’t wait to get his season started.

“He is rated 157 so we will see what the weights are and where he would stand in the Ladbrokes Trophy before making any real decisions.

“Newbury is a very good option for him. If Willie decides that it is the race for him, then he would go straight there.

“He is still only a six-year-old, so we are hopeful there is plenty more improvement to come. He is a very exciting horse.”

Mullins’ other entries are G2 National Hunt Chase scorer Rathvinden (25/1) and Invitation Only (25/1). 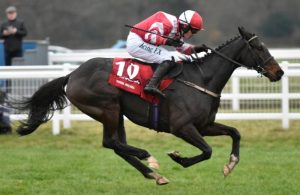 There are 12 entries in total from Ireland, with Gordon Elliott having entered three-time G1 victor Don Poli (16/1) and Monbeg Notorious (33/1), successful at G2 level last season.

Thistlecrack’s trainer Colin Tizzard took the Ladbrokes Trophy in 2016 with Native River, who went on to win the G1 Cheltenham Gold Cup this year. He has also entered Elegant Escape (10/1), who defeated Black Corton (Paul Nicholls, 25/1), winner of eight chases last season, to land the G2 Ladbrokes John Francome Novices’ Chase over nearly three miles at the 2017 Ladbrokes Winter Carnival. Elegant Escape was subsequently placed in G1 company at Kempton Park over Christmas (beaten into second by Black Corton), plus at the Cheltenham and Aintree Festivals (third to Terrefort) in the spring.

Tizzard’s five entries are completed by Sizing Tennessee (25/1), The Dutchman (33/1) and West Approach (20/1), a half-brother to Thistlecrack.

Step Back (Mark Bradstock, 25/1) ended last season in fine style when running away with the bet365 Gold Cup at Sandown in April and represents the Mark Bradstock stable, triumphant in the Ladbrokes Trophy with Carruthers in 2011.

Philip Hobbs, who saddled the 2001 Ladbrokes Trophy hero What’s Up Boys, has a possible outsider for this year’s renewal in Rock The Kasbah (50/1). The eight-year-old was runner-up to Step Back in the 2018 bet365 Gold Cup. He finished sixth on his seasonal reappearance behind The Young Master (Neil Mulholland, 16/1) at Chepstow on October 13.

Somerset-based Hobbs said: “Rock The Kasbah has come out of his run at Chepstow well.

“He shaped very well there and just got tired late on. He is a classy three-mile handicap chaser.

“We would like to see some more rain and we have entered him in the Ladbrokes Trophy.

“Newbury is certainly something we are thinking about.”

Weights for the Ladbrokes Trophy will be revealed on Wednesday, November 7.

Nicola McGeady, Head of PR for Ladbrokes, commented: “It is great to see another quality list of entries from both the UK and Ireland for the second running of the Ladbrokes Trophy.

“It is no surprise to see Nicky Henderson’s Terrefort as the 8/1 favourite, with this race the target for the progressive five-year-old. Also among the front runners, we have Kerry National winner Snow Falcon from the yard of Noel Meade while it is great to see Thistlecrack entered too.

“Last year’s race was a fantastic battle between Total Recall and Whisper with the former becoming the first Irish-trained winner since 1980. This year’s entries look sure to provide us with another enthralling renewal of the Ladbrokes Trophy.”

14/1 Isleofhopendreams, Snow Falcon, Up For Review

Monbeg Notorious, One For Arthur, The Dutchman