The dawn of a new era as perpetual Ladbrokes Trophy unveiled

The dawn of a new era as perpetual Ladbrokes Trophy unveiled

The remarkable anatomy and power of the steeplechaser is the inspiration behind the new winner’s trophy commissioned by the sponsor for Saturday’s £250,000 Ladbrokes Trophy at Newbury Racecourse.

After 60 years of being known as the Hennessy Gold Cup, Ladbrokes has reinvigorated one of the most iconic and popular contests of the Jump racing season with an injection of prize money and a new identity, reflected by the striking trophy that will be lifted by connections of the winner on Saturday, December 2.

The trophy is the work of Lee Simmons, an artist and designer who studied metalwork and silversmithing at university, and relishes the fusion of traditional silversmithing techniques with modern digital technology.

Simmons said: “The founding inspiration for the design of the trophy derives from the incredible anatomy of a racehorse and in particular of the structure of the lower leg of the horse, the bones, joints, muscles, tendons and ligaments that support the weight and power of these athletic bodies.

“To capture the essence of the racehorse and in homage to them, an abstracted slender form of the lower portion of their legs holds up, in suspended animation, the winner’s silver plate that has at its heart an abstracted scene of a chase.

“The perpetual nature of this abstracted animated scene is synonymous with the never-ending endurance and commitment that is given by horse, jockey, trainer and owner, to accomplish racing’s greatest achievements.”

Simmons first worked with Ladbrokes when commissioned to create a distinctive trophy for the winning owner of the 2012 Ladbrokes St Leger at Doncaster, part of a larger trophy designed by his former Sheffield Hallam University tutor Chris Knight, who has in turn assisted in the creation of this trophy.

The design process for this trophy began some six months ago, with the traditional silversmithing processes involved being carried out, meaning that its construction could not be rushed.

“I was introduced to the racecourse’s CEO Julian Thick by Madeleine Lloyd-Webber, as I have also been working on an interesting commission for the Lloyd-Webbers at the Palladium in London and Julian had seen my portfolio,” explained Simmons.

“At the same time, I knew Mike Dillon from my previous work for Ladbrokes and so the two things came together when it came to being asked to design and create this trophy.” 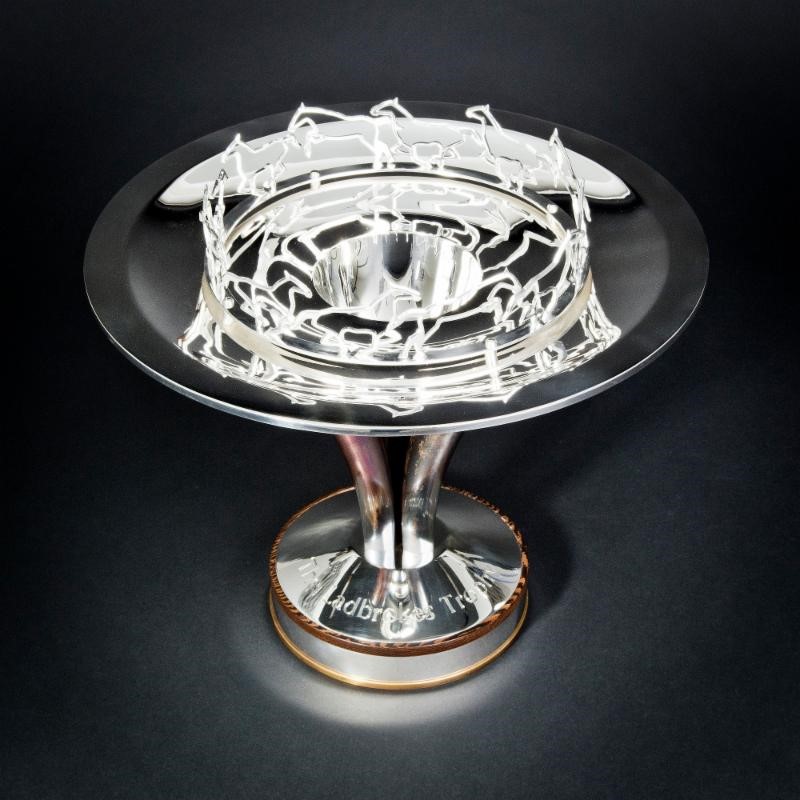 I use a lot of 3D printing as part of the design process, and an example of that is the horseshoe shapes used on the main body of the trophy which were made in 3D printed form and then cast in bronze before eventually being created in silver.

“It is a trophy which has a natural affinity to being touched, to being handled and interacted with, which is akin to all of the great sporting trophies. They convey a sense of achievement in their presence and I hope people feel the same way about this trophy when they see it.”

Mike Dillon, Director of Public Relations for Ladbrokes, added: “The new trophy is a fitting prize for such an iconic race which repeatedly produces superstar horses.” 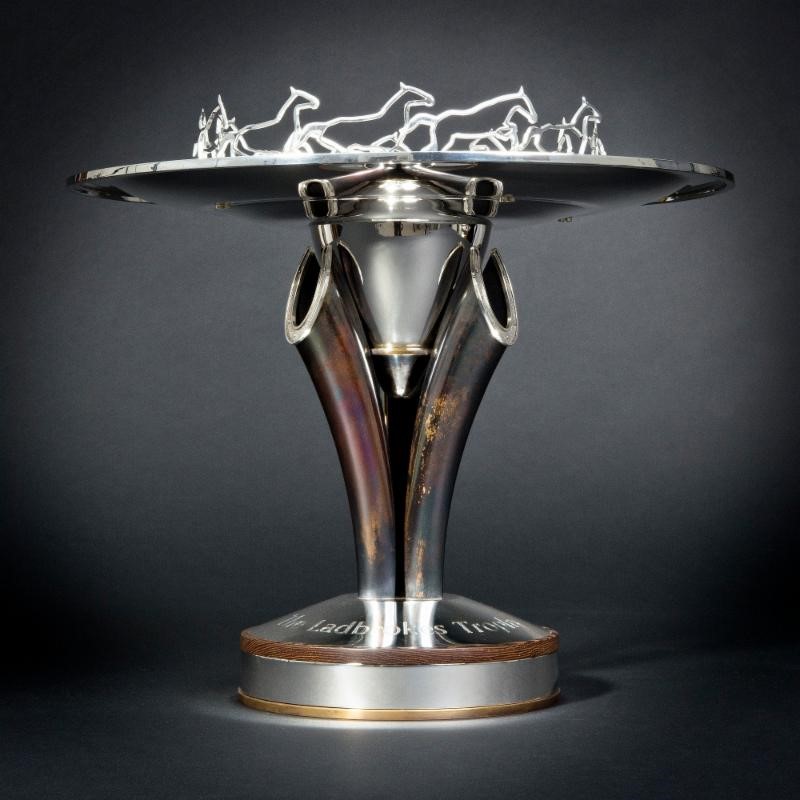 Lee Simmons’ work is a synthesis that brings together architecture, art and design and exploits the relationship between their blurred peripheries.

Born in London, in 1987, Lee first studied metalwork and silversmithing at Sheffield Hallam University (2006-2009), and followed his graduation with a Master’s degree from the Royal College of Art in London (2009-2011). He currently lives and works at his Hertfordshire-based design studio.

He says: “Am I an artist, a technician of design or craftsmen? To answer this question would manifest itself in inhibition. I am a creative that thrives on having flexibility to straddle the line between all disciplines.”

He is currently working on a number of high-profile projects around the capital and is due to complete one of London’s largest pieces of public art work at Marble Arch’s new development in 2020. The art work will act as a beacon and gateway into the West End of London.

Lee’s work can also be found at 77 Wimpole Street, a grand door inspired by the vermiculated Ashlar technique, the gate is cast in aluminium sections paying reference to the smoothness of modernity verses the roughness of antiquation. Lee is also due to complete a piece of public art at 66 Wigmore Street which will act as a visual beacon and gateway to Marylebone Lane, bringing his artwork into the public realm by projecting out of the atrium space of this new piece of architecture bursting into the open air of the street.

In 2012 Lee designed the winning trophy for The Ladbrokes St Leger. Lee has won numerous awards including the New Designers Award for the best graduate in show and awards with the Goldsmiths’ Company.

Lee’s work can also be found in the private collection at The Royal College of Art. His piece titled ‘Confessions At The Bench’ is fabricated from corten steel with perforated metal screens that create an effect reminiscent of a catholic confessional box. Lee has also won a commission from the Worshipful Company of Saddlers to design and create a silver lectern in celebration of the sixtieth anniversary of Her Majesty the Queen