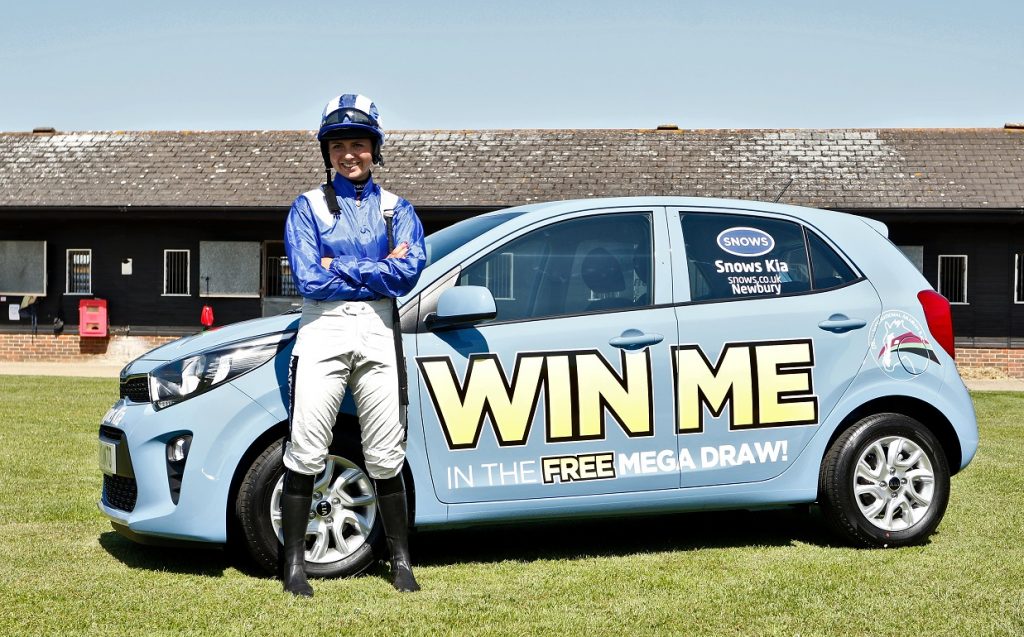 Staged under the patronage of H.H. Sheikh Hamdan bin Rashid Al Maktoum, Deputy Ruler of Dubai and UAE Minister of Finance, the Dubai International Arabian Races is the culmination of an international race series for purebred Arabians and widely regarded as the most important day’s racing in the sport’s global calendar.

Speaking last Thursday at trainer James Owen’s Green Ridge Stables in Newmarket, Frost said: “The Dubai International Arabian Races is an awesome day out with top class racing and loads of entertainment for all the family.  I’m really looking forward to being part of it.

“Riding Arabians competitively for the first time will be a challenge but I’ve had lots of help and advice from James (Owen) and Richard Hills and I can’t wait.

“Arabians are real characters, they’re very intelligent and really switched on.  You have to take them through their gears slowly and make sure you say ‘please’ and ‘thank you’ but once you get them there they really start to roll.”

“It will be a real honour to step out in the famous blue and white silks of H.H Sheikh Hamdan and I am thrilled to have been invited to ride.”

James Owen, a former amateur rider who can count among his achievements more than 50 Arabian winners on the Flat and nine consecutive East Anglian point-to-point championships, said: “It has been great to have the opportunity to welcome Bryony to the yard and to introduce her to some of H.H Sheikh Hamdan’s pure bred Arabians.  Having ridden both jumpers and Arabians I hope I’ve been able to give Bryony some good advice.  Arabians and thoroughbreds are very different in character but I am sure as an accomplished horsewoman Bryony will be able to make the most of her ride.”

Frost is taking her call-up to Arabian Racing’s biggest day very seriously and intends to gain some valuable race riding experience in the Al Gheezah Beach Handicap at Bath tomorrow (Wednesday) where she will partner the H.H Sheikh Hamdan owned, Jaahez, who will be making his handicap debut in the 10f contest for Purebred Arabians.

An important series of prep races for the Dubai International Arabian Races continues at Newbury on Thursday evening with the running of the DIAR 2019 Juvenile Stakes for three-year-olds over seven furlongs which carries a bonus for the owner of any horse finishing in the first three places and then goes on to win one of the five bonus races at Newbury on Sunday, 28 July.

In addition to the eight-race card the day features a host of prize draws, competitions and family attractions headed by the chance to win a brand-new car.

Admission is free at Newbury Racecourse on Sunday, 28 July and racegoers will have the chance to win fantastic prizes throughout the afternoon headed by a brand-new car and holidays in Dubai in free-to-enter prize draws.

The draw for a stunning Kia Picanto 2 supplied by Snows Kia, Newbury and worth £11,300, will take place in the winner’s enclosure after the eighth and final race of the afternoon.  The draw is free to enter and the winner, who must be over the age of 17, must be present when the draw is made.  In the event that the holder of the first ticket drawn does not present themselves within three minutes of their name being announced a second ticket will be drawn and the process repeated until one lucky racegoer is presented with a brand new set of car keys.

A fantastic trip to Dubai which includes business-class flights courtesy of the multi award-winning Emirates Airline and accommodation at one of Roda’s five-star properties in the UAE’s most vibrant City is the star prize in the racecard competition.

Free goodie bags and gifts will be distributed to those arriving early courtesy of the event’s title sponsor, Shadwell, and Dubai’s ‘family racecourse’, Jebel Ali, who will also be providing designer watches and mobile phones to be drawn throughout the afternoon.

Visitors to www.newburyracecourse.co.uk can increase their chances of winning a trip to Dubai by entering an exclusive draw restricted to racecgoers who both register in advance and attend on the day.

The winner of the Best Dressed Lady competition at the Dubai International Arabian Races on Sunday, 28 July will be jetting off to soak up the sun at one of the Middle East’s most glamourous destinations with a trip to Dubai.  Return flights with Emirates Airline and luxury accommodation for two courtesy of Roda Hotels & Resorts awaits the winner.

Apple iPads will be awarded to the winners of the Best Children’s hat competition.  The boy and girl each judged to have been the most creative in designing and making a hat which best reflects any aspect of the Dubai International Arabian Races will each be presented with a brand new iPad courtesy of the event’s title sponsor, Shadwell, and there will be plenty of runners-up prizes to be won.

An iPad is also the prize in the Best Selfie competition.  Racegoers of all ages can upload their selfies to social media using the hashtag #DiarNewbury for the chance to win.  The winning photo will be displayed on the giant screens around the racecourse when the winner is announced.

The winner and runners-up of the Arabian Rainbow competition will be announced during the afternoon.  Introduced in 2009, the Arabian Rainbow competition is a community arts project which challenges pupils from 14 schools in West Berkshire to decorate a life-sized sculpture of an Arabian horse for the chance to win a first prize of £2,500 for their school.  Since its inception the competition has contributed more than £150,000 towards enriching the education of schoolchildren in the region through prize money and gifts.

There will be opportunities for younger racegoers to get active and creative throughout the afternoon at the Dubai International Arabian Races at Newbury Racecourse on Sunday, 28 July.

Face painters and Henna Tattoo Artists have become a popular feature at the event and will be offering their services free of charge to racegoers in the Activity Hub.

Also in the Activity Hub equine artist, Liz Armstrong, will be running her popular workshop and sharing her tips and techniques with aspiring young artists who can create their own masterpieces to take home.

Racing to School, the education charity that delivers free outdoor learning activities for young people at racecourses, studs and trainers’ yards will be organising a special introduction to racing for children who have taken part in the Arabian Rainbow competition and their siblings, and will offer all racegoers the chance to try their jockey skills on an ‘equiciser’, used by professionals to hone fitness and riding technique.

Race riding is just one of the opportunities promoted by Careers In Racing, the British Horseracing Authority-managed initiative that provides information on careers across the whole of the racing industry.  Their popular jobs board at careersinracing.com processes over 1,000 job opportunities each year and they will be on hand at the Dubai International Arabian Races at Newbury Racecourse on Sunday, 28 July to offer advice and hands-on activities throughout the day.

The ever-popular Derby Horse Hoppers are set to provide younger racegoers with the chance to win their own race, and for the less energetic live falcons, synonymous with the UAE, will create unique photo-opportunities which can be shared at #DiarNewbury.

Shadwell Stud, the internationally renowned racing and breeding operation established by His Highness Sheikh Hamdan bin Rashid Al Maktoum, will be joined by some of the UAE’s leading brands in support of the eight-race programme which begins at 2.10 p.m. and features no fewer than three Group 1 contests.

Jebel Ali Racecourse, owned and founded by His Highness Sheikh Ahmed bin Rashid Al Maktoum, has been a strong supporter of the Dubai International Arabian Races since its inception.  The informal family atmosphere of its Friday afternoon meetings have provided much of the inspiration for the activities at Newbury on Sunday 28 July.

In addition to supporting the first of the afternoon’s Group 1 events, the Jebel Ali Za’abeel International Stakes, Dubai’s family racecourse will be providing free giveaways to racegoers and high-value gifts for prize-draws which will take place between races.

The multi award-winning Emirates Airline, is among the brands to have supported the Dubai International Arabian Races since its first running at Newbury Racecourse in 2003 and names the opening race on the programme at 2.10 pm, the Emirates Premier Handicap Stakes.

which will be drawn in the winners enclosure after the feature race of the day, the Group 1 Shadwell Dubai International Stakes at 4.55 p.m., and includes a complimentary business-class upgrade.

Five-star luxury accommodation awaits the prize-winners on arrival in Dubai courtesy of Roda Hotels & Resorts who join with Emirates Airline to provide the fabulous holidays which will be given away at the Dubai International Arabian Races at Newbury Racecourse on Sunday, 28 July.

Roda, whose portfolio in the Emirates’ most vibrant city includes hotels, suites, boutique villas and beach resort properties, are also responsible for the Roda Hotels Premier Handicap Stakes, the penultimate race on the card.

Emirates NBD, the Middle East region’s leading banking group with operations in the UAE, the Kingdom of Saudi Arabia, Egypt, India, Singapore, the United Kingdom and representative offices in China, Indonesia and Turkey, continues to be a valued partner and sponsor of the Dubai International Arabian Races.  The Emirates NBD Handicap Stakes will conclude the sporting action at 6.00 p.m. and precede the DIAR Mega Draw when one lucky racegoer will drive away with a brand-new car.

The UAE Embassy in London International Stakes at 2.40 p.m. recognises the close association between the Embassy of the United Arab Emirates and the Dubai International Arabian Races, and acknowledges the important role horseracing continues to play in fostering international relationships.

A delegation led by His Excellency Mansoor Abdullah Khalfan Abulhoul, the UAE Ambassador to the UK, will be in attendance to enjoy the day’s racing and present trophies to the connection of the winner of the second race on the card.

Prizes for trainers and stable staff

The enormous contribution made by stable staff responsible for preparing and leading-up runners at the Dubai International Arabian Races at Newbury Racecourse on Sunday, 28 July will be recognised by Up Next Digital who will award a cash prize of £300 to the stable responsible for the horse judged to be the Best Turned Out in each of the day’s eight races.

For the first time this year trainers will compete for an additional £1,000 cash prize sponsored by Baileys Horse Feeds, the family-owned international producers and distributors of a wide range of horse feeds and supplements.

The DIAR Leading Trainer competition will be decided on a points basis throughout the afternoon and Mark Buchan, Baileys Export Manager, will be on hand to make the award to the day’s most successful trainer.

Gates open at 12 noon and admission is free.  Scratchcards handed out on arrival will entitle racegoers to collect a free ‘goodie bag’ packed with toys and gadgets, and Jebel Ali Racecourse will be gifting specially produced Jebel Ali branded merchandise to those arriving early.