Ante-post favourite Native River heads a field of 20 for the feature £200,000 Hennessy Gold Cup at Newbury on day two of the bet365 Festival, Saturday, November 26. The famous three and a quarter mile handicap chase is being run for the 60th time in 2016.

A Grade One-winning novice over fences at Aintree last season, Native River (Colin Tizzard/Richard Johnson, 11st 1lb) is the 9/2 market leader with bet365 following a good second over hurdles on his comeback at Wetherby in October.

The next three in the betting are also second season chasers. Vyta Du Roc (Nicky Henderson/Tom O’Brien, 10st 3lb, 7/1 with bet365) captured the G2 Reynoldstown Novices’ Chase at Ascot in February, while Un Temps Pour Tout (David Pipe/Tom Scudamore, 11st 4lb, 15/2) ran away with the staying handicap chase on the opening day of the Cheltenham Festival.

Blaklion (Nigel Twiston-Davies/Ryan Hatch, 11st, 8/1) was among the best staying novices last season with three wins from seven starts, including a battling victory in the G1 RSA Chase at the Cheltenham Festival. The seven-year-old ran a good race on his return when fourth in the G2 Charlie Hall Chase at Wetherby on October 29.

Twiston-Davies, who sent out King’s Road to victory in the 2000 Hennessy Gold Cup, said: “Blaklion has improved for the run at Wetherby and is in very good heart.

“He has got the right sort of profile for this because he is a second season novice. He will like the softer ground and longer trip, so it all looks good for him. I am quite bullish about it.

“Double Ross (Jamie Bargary, 10st 9lb, 50/1) won well at Chepstow earlier in the season. He is obviously very much more exposed than Blaklion but we are hoping he runs well.”

Last year’s winner and top-weight Smad Place (Alan King/Wayne Hutchinson, 11st 12lb, 8/1) is out to become only the fourth two-time winner of the Hennessy Gold Cup, following Mandarin, Arkle and Denman. The nine-year-old will race from an 11lb higher mark this time around. 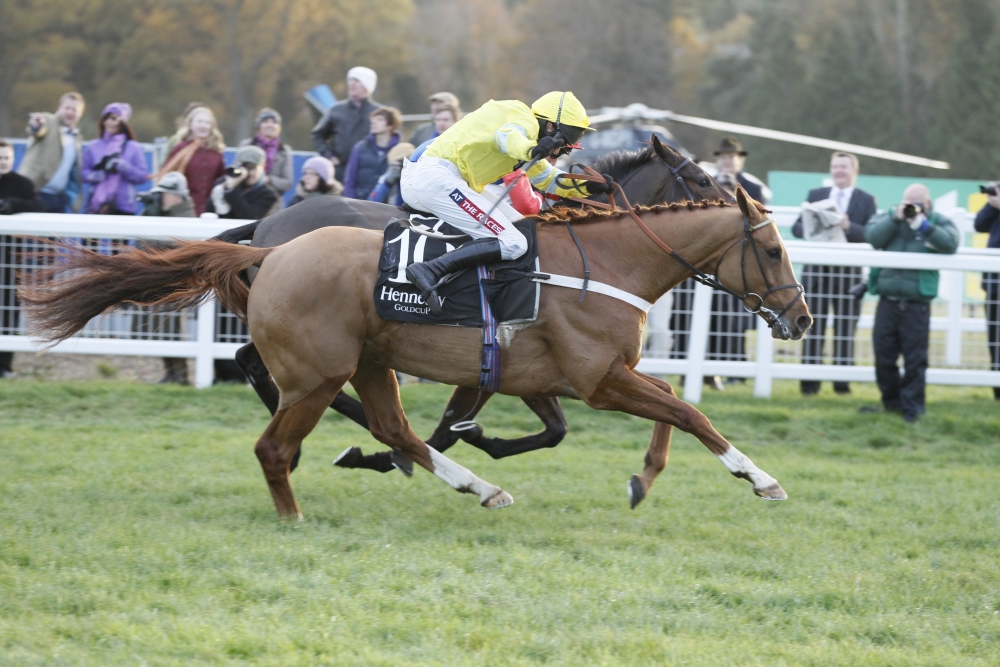 The bet365 Festival kicks off tomorrow, Friday, November 25, with a seven-race programme running from 12.20pm through to 3.45pm.

Tomorrow’s highlight is the £50,000 Grade Two bet365 Long Distance Hurdle (2.10pm, nine runners) over three miles. Heading the market at 7/4 with bet365 is Ballyoptic (Nigel Twiston-Davies/Ryan Hatch), who landed a G1 novices’ hurdle at Aintree in April. He fell at the final flight on his seasonal return when still well in contention in the G2 bet365 Hurdle at Wetherby on October 29, a race in which The Romford Pele (Rebecca Curtis/Jonathan Moore, 8/1) finished fourth.

Twiston-Davies continued: “Ballyoptic is absolutely fine after his fall at Wetherby. He was just winded there and has jumped brilliantly since. It has not dented his confidence at all, so we are expecting another big run.”

Tomorrow’s card at Newbury also includes the £50,000 bet365 Open Handicap Chase (2.45pm, nine runners) over just short of two and a half miles while an intriguing contest is in prospect for the £35,000 G2 Fuller’s London Pride Novices’ Chase (1.35pm, five runners) over the same distance.

The ground at Newbury is currently:

The forecast for today, tomorrow and Saturday is for overcast but predominantly dry conditions.