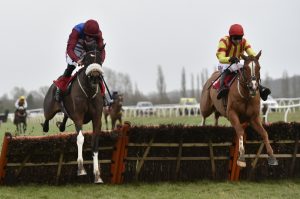 The extended two and a half-mile contest, which has a total prize fund of £40,000, is Newbury’s only Grade 1 contest across the National Hunt season. The roll of honour for the Betway Challow Hurdle features some of Jump racing’s greatest stars, headed by Denman in 2005 who went on to land two runnings of the now Ladbrokes Trophy (2007 & 2009), plus the 2008 Cheltenham Gold Cup.

Other famous names to have landed the Betway Challow Hurdle include the 2002 Grand National winner Bindaree, as well as King’s Road, Diamond Harry and Barters Hill.

Last year’s renewal produced one of Newbury’s moments of the season when Poetic Rhythm handed his trainer Fergal O’Brien a first Grade 1 success.

Julian Thick, Chief Executive of Newbury Racecourse said: “We are delighted and grateful that Betway has come on board to sponsor our sole Grade 1 contest of the season.

“It is always a fascinating race with an illustrious Roll of Honour. Betway Challow Day is always a popular afternoon for racegoers after the indulgences of Christmas, with approximately 10,000 enjoying an afternoon of quality action.

“This year, we will also be saying goodbye to our Clerk of the Course, Richard Osgood, who leaves us following the meeting after almost 40 years of loyal service.”

Alan Alger, Head of PR for Betway commented: “The Challow Hurdle is a fantastic race at a very exciting time of the year for National Hunt fans. The race fits perfectly within Betway’s portfolio of high-level races across the season.”

Betway will sponsor the entire card on Betway Challow Hurdle Day, which is Newbury’s final raceday of 2018. The Betway Challow Novices’ Hurdle is one of four races that will be broadcast live on ITV 4 on the day.

In addition to the Betway Challow Hurdle, the card’s other highlights include the £19,800 Betway Mandarin Handicap Chase and the £18,000 Betway Handicap Hurdle.