Barters Hill and a formidable septet from the stable of Ireland’s champion trainer Willie Mullins headline 16 entries for the £40,000 Grade One Betfred ‘Goals Galore’ Challow Novices’ Hurdle (2.00pm) at Newbury on Tuesday, December 29.

The extended two and a half mile highlight has been won by some top-class performers in recent years, notably 2008 Cheltenham Gold Cup hero Denman (2005) and three-time Grade One Long Walk Hurdle victor Reve de Sivola (2009).

Barters Hill (pictured below, white/blue) was unbeaten in four bumpers last season, culminating with hard-fought victories over Buveur D’Air in a Listed contest at Newbury in February and Bellshill in Aintree’s Grade Two championship event in April.

Trained by Ben Pauling, the five-year-old made an impressive transition to hurdles when beating subsequent Cheltenham scorer North Hill Harvey by 14 lengths at Huntingdon on November 1.

Pauling reported today: “Barters Hill is in great form and I could not be happier with him. 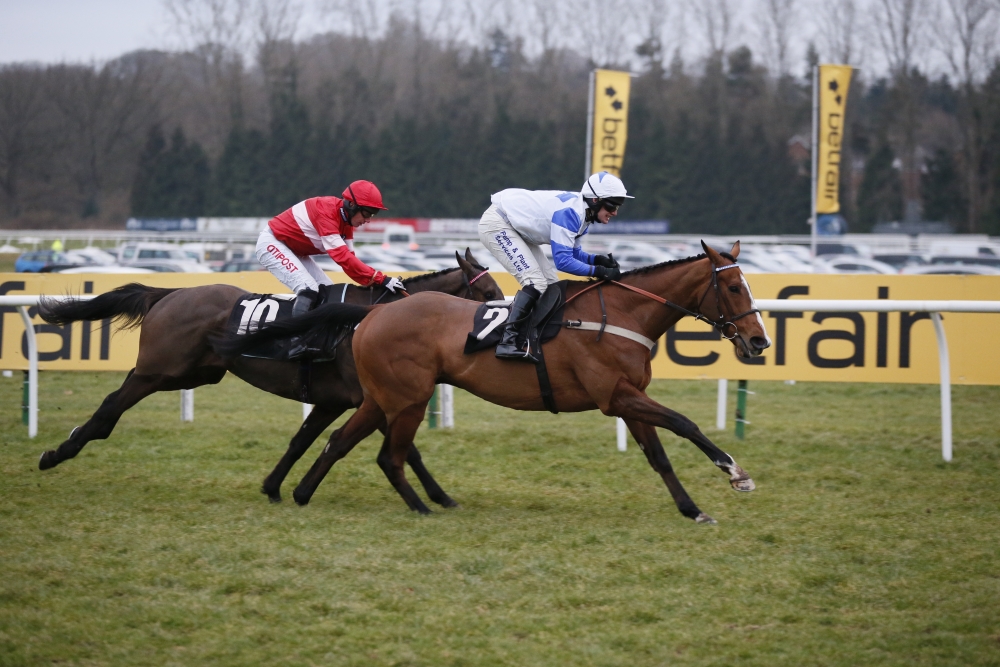 “We know he handles soft ground and I think he will be able to handle whatever is thrown at him.
“It was a huge form boost to see North Hill Harvey win as he did at Cheltenham. He did make a mistake at the second last at Huntingdon but I think Barters Hill would have beaten him comfortably no matter what.
“Willie Mullins has several entries and Alan King’s horse that won at Sandown looks to have a nice, progressive profile but we are happy to take on whatever comes our way.”

Long Dog and Bachasson, first and second in the two-mile Grade One Royal Bond Novice Hurdle at Fairyhouse on November 29, head the Mullins’ entries. The County Carlow handler has also engaged Nambour, Up For Review and Yorkhill, who all scored on easily on their respective hurdling debuts, plus Stone Hard and Open Eagle, who is set to run at Kempton Park on Boxing Day.

Label Des Obeaux (Alan King) brings Grade Two form to the table thanks to a length and half victory in the Neptune Investment Management Novices’ Hurdle at Sandown Park on December 4.

Other notable entries include O O Seven (Nicky Henderson), unbeaten in two starts this campaign, and highly-regarded French import Politologue (Paul Nicholls), who jinked and unseated his rider in the race won by North Hill Harvey at Cheltenham last time out.

Newbury’s seven-race programme on December 29 starts at 12.15pm and concludes at 3.45pm.

Tickets are available from www.newburyracecourse.co.uk and accompanied under 18s gain FREE entry, making it a great opportunity for a family day out after Christmas.