Newbury Racecourse staged Betfair Super Saturday on February 11, with a tremendous seven-race programme including the £155,000 Betfair Hurdle, Britain’s richest handicap hurdle and the racing turned out as good as expected.

The going was Soft.

A race-by-race account of the day’s proceedings can be found below.

The Betfair Hurdle was dominated by two six-year-old novices’ with Ballyandy (Nigel Twiston-Davies/Sam Twiston-Davies, the strongly-backed 3/1 favourite) getting the better of Movewiththetimes (Paul Nicholls/Barry Geraghty, 6/1) by three quarters of a length.

The pair moved clear of the field two flights from home and were together over the last before fighting it out on the run-in, with Ballyandy coming out on top. There was six lengths back to Clyne (Evan Williams/Adam Wedge, 6/1) in third with fourth-placed Song Light (Seamus Mullins/Kevin Jones (5), 14/1) another two lengths adrift.

Nigel Twiston-Davies said: “It’s lovely when a plan works out. Ballyandy has been unlucky and hasn’t won any of the races we thought he would but what a consolation.

“The handicapper gave us a chance for once.

“At the moment, the Supreme Novices’ Hurdle is his target at Cheltenham, although he is in the Neptune as well.

“We will see what looks the easiest at the time. The Neptune could be an option as we know he stays.

“The world is his oyster.”

Sam Twiston-Davies added: “It has worked out great. Nigel’s horses are obviously in tremendous form and Willie [Twiston-Davies] and David Crosse have done a great job at Warwick but my main reason for being here was to ride this horse. He has done it very well.

“It was really smooth. I had a nice passage – he didn’t jump as well as I might have liked down the back but he really came alive in the straight.

I landed there way too soon but, with the cruising speed he has, it just all happens. You end up there, it is all about waiting and he does have a good turn of foot.

“We will see what the handicapper does and he will have plenty of options. I suppose he will have entries in everything at Cheltenham and I will leave it to the boss to make the decision.”

Native River (Colin Tizzard/Aidan Coleman, 11/10) completed his preparation for next month’s Cheltenham Gold Cup with an authoritative three and a quarter length victory in the Betfair Denman Chase.

The seven-year-old had already shown his liking for Newbury earlier this season, when taking the Hennessy Gold Cup in November. Sandwiched in between his Newbury wins, he won the Welsh National at Chepstow over Christmas.

Leading throughout, Native River was pushed into a clear lead two out. He stayed on to see off the challenge of Le Mercurey (Paul Nicholls/Sam Twiston-Davies, 14/1), with disappointing 10/11 favourite Bristol De Mai (Nigel Twiston-Davies/Daryl Jacob) sixth lengths back in third.

It was a good spare ride for Aidan Coleman, who stepped in for Richard Johnson who was suffering from the effects of flu.

Colin Tizzard said: “I think Aidan only asked him going to the second last – he just nudged him along – and it shows that the horse is a bit classier. In his last two races, he went five or eight lengths clear four out and only just held on.

“We wanted to ride him a bit differently today and have that finishing spurt at the end. It has worked out brilliantly as he was going away on the line. Aidan is not a bad sub is he?

“It would be unfair of me to say who was better out of my Gold Cup entries but they are all lovely horses and I am just so proud to have them in our yard.

“In a three-horse race today, you would have thought that we might get outmanoeuvred but Native River has got a bit more class than a thorough stayer, he has got a bit of pace as well.

“We will see who comes out on top next month.

“Richard was just feeling a bit wobbly and thought that he wouldn’t be able to do the horse justice. That just shows Richard as the man he is.”

Aidan Coleman added: “I had a quick chat with Richard Johnson before I got ready to come out for Native River and he told me what he thought he would do.

“I followed that to the letter and to be fair, from looking at the horse running, I would have gone quicker but Dickie’s plan was absolutely perfect – it was to get him some company and then he would run on again.

“He would have to be in front a long way otherwise, so it is all down to Richard Johnson. Any chance of getting outmanoeuvred was never going to happen with that plan.

“The mistake Native River made was definitely jockey error and he was very clever to get out of it. Other than that, he is an absolutely fantastic jumper with a lot of class as well.

“He is just a perfect racehorse, really. It’s very nice to have a sit on him and I wish connections all the best for the future.

“You can’t keep a good man down, especially Dickie Johnson, who is a great. He will be back sooner rather than later, I would imagine.” 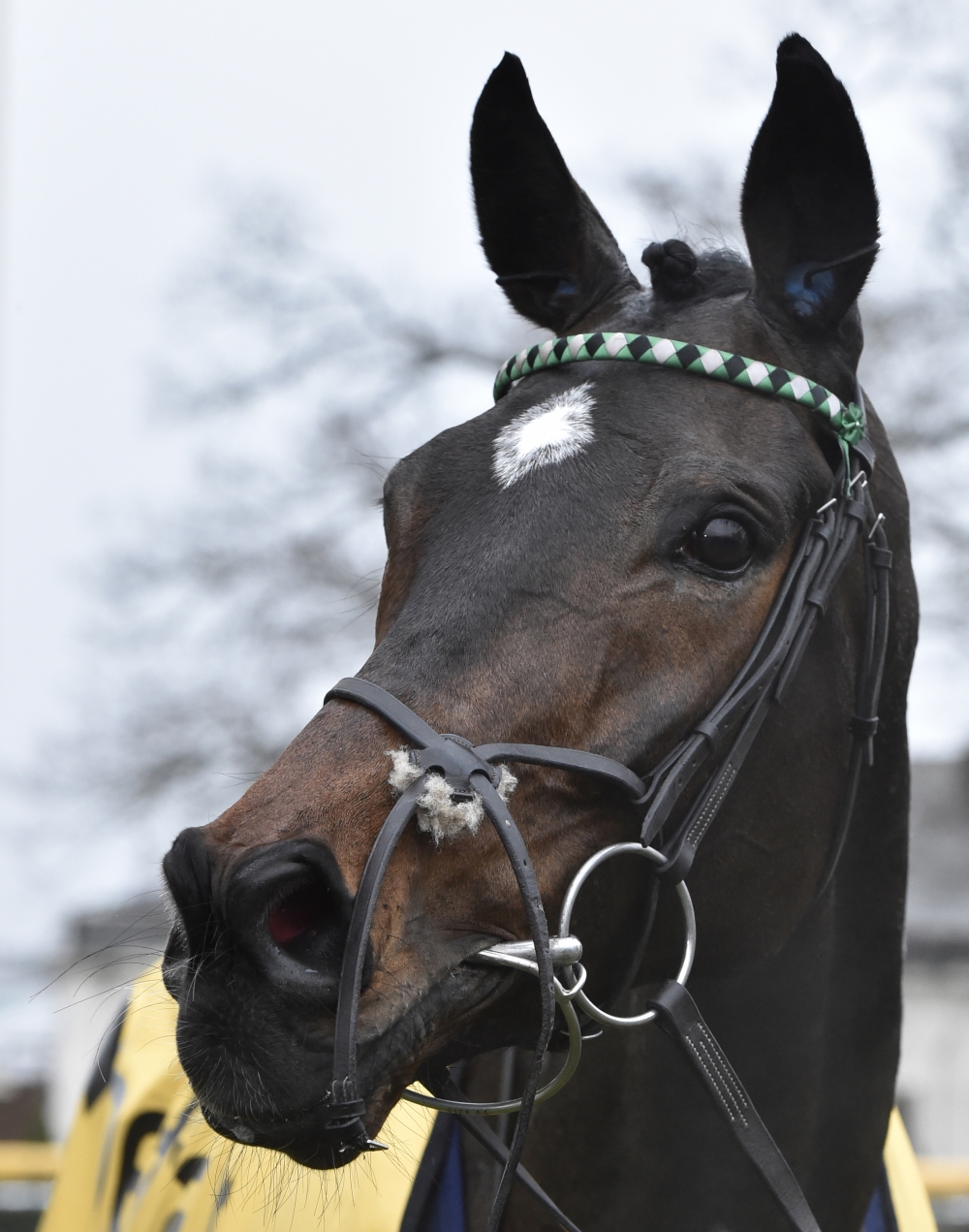 Altior (Nicky Henderson/Nico de Boinville, 30/100 Favourite) could not have been more impressive as he sauntered to a facile 13-length victory in the G2 Betfair Exchange Chase.

Jumping superbly throughout, the winner made all the running and came home as he liked. Today’s win cemented Altior’s position at the head of the market for the Racing Post Arkle Trophy at the Cheltenham Festival. Fox Norton (Colin Tizzard/Aidan Coleman, 5/1) was second but never got in a challenge.

Nicky Henderson said: “It was a pity he had to go round on his own and he showed off a bit but it was nice and easy for Altior today and he has shown he can handle the ground.

“We have always though Altior was something special and I was devastated when he got beat in a bumper on this card two years’ ago.

“I think he is a genuine two-miler and now we know he can also handle soft ground.

“I was very nervous about the ground because we have always tried to keep him out of it. Several times last night I had decided he wasn’t going to run!

“He has been on exactly the same route as Sprinter Sacre but let’s try and win the Arkle first – we have got this far with him. He is still a young horse.

“Willie (Mullins) has had a brutal time and the thing we will all miss this year is Sprinter Sacre not being able to have a game with Douvan (in next month’s Queen Mother Champion Chase at Cheltenham). If everything goes right and we are all around in a year’s time, then maybe Altior and Douvan can meet then. It would be great, wouldn’t it?”

Nico de Boinville added:  “I have so say a big thank you to the Pughs (owners) and the guv’nor – they have stuck by me while I have been injured and have been really good to let me back on him.

“He’s quite the star, isn’t he? Just to ride a smashing horse like this is quite something.

“Everyone is going to be asking me to compare him to Sprinter Sacre but I just like to enjoy horses in their own right. Altior is pretty electric.”

Rest of the card

The six-year-old is now undefeated in three outings over hurdles and made virtually all the running today, lengthening well after the last to get the better of the staying-on Azzerti (Alan King/Wayne Hutchinson, 6/1) by two and a quarter lengths.

Winning owner John Ferguson, who trained the winner until retiring at the end of last season, commented: “He had good bumper form and has improved massively since he went to Ben.

“He won here earlier in the season and then went and won at Catterick. Catterick is a good test and horses learn a lot there.

“He has come here and won well today and I couldn’t be happier. He is rated 140 which means handicaps are out and he has entries in both the Supreme and the Neptune at Cheltenham.

“We don’t have to make the decision about Cheltenham yet and we will come to a decision nearer the time. He has that bit of class, which he will need.

“I was very impressed with the way he quickened up at the second last when he was joined by Richard Johnson’s horse (Multiculture).

“Alex (Ferguson’s son) will ride him again at Cheltenham. He won’t be able to claim but has ridden for me at Cheltenham and Aintree, so has experience at the big festivals.”

“I think a true-run two miles is probably his best trip, so going for the Neptune would be a slight unknown.

“His dam (Ameerat) won a Guineas and he is not short of speed. We will give his Cheltenham target serious thought.”

The seven-year-old was winning for the seventh time in succession, with his successful sequence stretching back to the summer of 2015. His handicap rating has also risen sharply during that time – his first victory came off 81 while today he was successful off 136.

Taking up the running two flights from home, Tobefair was headed after the last but rallied gamely to score by a length and a half from Morello Royale (Colin Tizzard/Aidan Coleman, 14/1).

Tobefair is owned by the Down The Quay Club Syndicate, who bought the horse as a potential point-to-pointer.

Winning trainer Debra Hamer said: “Tobefair is just unbelievable. He is so laid back and easy to train.

“He only beats what he has to on the day and saves his energy for his races. This time yesterday he was covered in mud in a field!

“We will see how he comes out of today’s race before deciding if he goes to Cheltenham.

“He usually gets over his races very well and we just take things a week at a time with him. He has been laidback since his first race and is very brave.”

The eight-year-old was delivered with well-timed run by jockey Gavin Sheehan to overhaul long-time leader Lessons In Milan (Nicky Henderson/Nico de Boinville, 3/1) after the last.

Winning trainer David Dennis said: “He did it well off of top-weight – he likes small fields and soft ground.

“The cheekpieces have been the key to him. He just seems to lack a bit of confidence and they have helped him.

“He only won at Hereford 12 days’ ago but the prize money on offer and the fact it looked like it was going to be a small field meant we had to come here.

“There are no major targets for him at this stage.”

The concluding Listed Betfair Ready? Bumper went to the only filly in the race, the four-year-old Daphne Du Clos (Nicky Henderson/Sean Bowen, 15/8 Favourite).

The daughter of Spanish Moon travelled sweetly throughout and took up the running entering the final furlong. She stayed on well to score comfortably by three and a quarter lengths from Western Ryder (Warren Greatrex/Gavin Sheehan, 4/1).

“Last time at Cheltenham was a muddling race – it was a mile and a half bumper and in those types of races they tend to finish on top of each other. Over two miles today, they have much more room to spread out.

“I will discuss it with Jared (Sullivan, owner) but there are mares’ races at Sandown and Aintree she could go for now. Aintree could be a good track for her.

“This race is usually very strong and I think Daphne Du Clos is obviously pretty smart.”