The Al Shaqab Lockinge Stakes is the second race in the Mile category of the QIPCO British Champions Series and features on a Newbury card which boasts total prize money of £750,000.

Both the second and third from last year line up again – Godolphin’s Toormore (Richard Hannon/James Doyle), who made a winning reappearance in the Group Two bet365 Mile at Sandown last month, and Arod (Peter Chapple-Hyam/Oisin Murphy).

After running so well last year when beaten a length by the winner Night Of Thunder, Arod captured the Group Two Summer Mile at Ascot and went down narrowly to Solow in the Group One Sussex Stakes at Goodwood in July before two disappointing performances in Australia.

The five-year-old was third to GM Hopkins (John Gosden/Robert Havlin) on his seasonal reappearance in the Listed Paradise Stakes at Ascot on April 27.

Chapple-Hyam, who trains in Newmarket, said today: “Arod is in great form. He has come a lot from his outing at Ascot as he always needs his first run badly.
“At the moment, he is definitely running but we will see what the going is like on Saturday as I am worried about the ground.

“I think if everything was right and the ground was good to firm, he would win. We will just have to see but he is in great order.”

There are similar ground reservations about Limato (Henry Candy/Harry Bentley, pictured below) who has headed the ante-post market since the entries were revealed at end of March. The four-year-old has yet to race over a mile but was an impressive winner of the Group Two Park Stakes over seven furlongs at Doncaster in September and also runner-up to champion sprinter Muhaarar in the six-furlong Group One Commonwealth Cup at Royal Ascot. 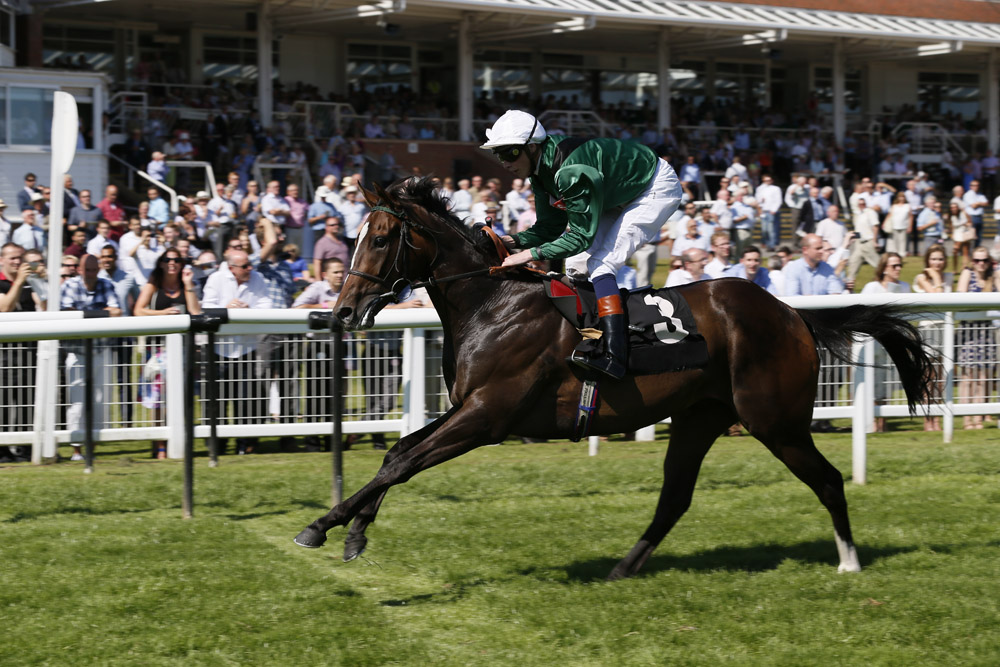 The Godolphin silks, as well as being on Toormore, are set to be carried by 2014 Group One Dewhurst Stakes winner Belardo (Roger Varian/Andrea Atzeni), likely pacemaker Barchan (Roger Varian/Jack Mitchell) and Dutch Connection (Charlie Hills/William Buick), the neck runner-up to Toormore at Sandown last month.

Kodi Bear (Clive Cox/Gerald Mosse) was an impressive winner of the Group Two Celebration Mile at Goodwood on soft ground in 2015 and will be making his seasonal reappearance.

Cox, at a Newbury Racecourse-organised media stable to his Lambourn yard on Tuesday, said: “Kodi Bear is in peak condition and I am very happy and pleased with him. Obviously, coming back in a Group One is a big ask and some of his opponents have had a run already.

“I hope he is there to do a job at Newbury on Saturday and we have a bright season ahead of us. We all believe he is a Group One horse and potentially he is the best miler we have ever had.

“Kodi Bear is versatile as regards the ground – it was very firm at Windsor and quick at Ascot and there are no concerns about softer ground as it was quite soft at Goodwood.”

Globetrotting Euro Charline (Marco Botti/Ryan Moore), a Grade One scorer in the USA in 2014 and runner-up in the Group One Dubai Turf at Meydan in March, is the one mare in the final field.

The Irish challenger is Endless Drama (Ger Lyons/Colin Keane), who has not been seen since chasing home Gleneagles in last season’s Irish 2,000 Guineas. The field is completed by Gabrial (Richard Fahey/David Nolan), the 2015 Lincoln Handicap winner.

After the conclusion of the seven-race thoroughbred card on Saturday, the Group Three ARO Cup (for Purebred Arabians) is staged at 6.05pm.

Richard Osgood, Newbury’s Clerk of the Course, reported at lunchtime today: “The going at Newbury remains Soft, Heavy in places.

“We are experiencing a warm, drying day today and there is no rain forecast for the next few days.

“If the forecast is correct, we would expect to see the ground dry out a little ahead of the racing on Friday and Saturday.”