We will once again welcome members of the Armed Forces and the Royal British Legion to the course on Saturday 26 October for its final Flat meeting of the season, Armed Forces Day. 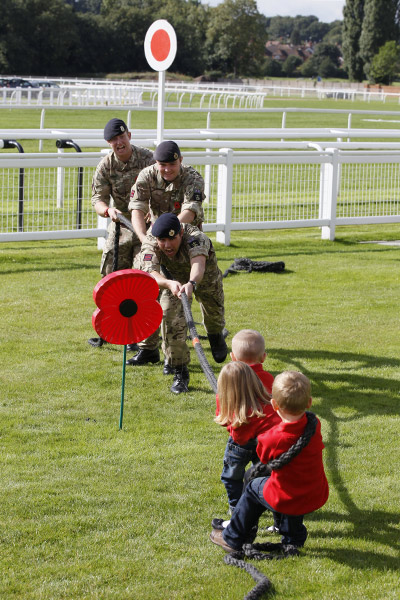 There’s free entry for those in the Armed Forces, Ministry of Defence civil servants and Royal British Legion (RBL) members, while the Berkshire RBL Poppy Appeal for 2013 will also be launched.

The latter has been won by some smart performers in recent years including subsequent Group 1 winner Beaten Up and useful filly Hazel Lavery, who beat Frankel’s brother Noble Mission in the contest last October.

And on what promises to be a great day of action on the track, off it a number of attractions will make it a fun occasion for all the family.

With funfair rides, face painters and our very own mascot Harry the Horse in attendance, there will be something to keep children of all ages happy.

On the day make sure you check out the Tug of War Tournament which will pit teams from the Armed Forces against each other to win some great prizes courtesy of Weston’s Cider. The winning side will present the Poppy to the day’s Guest of Honour who will kick-off the poppy appeal.

And don’t forget, under 18s go free and the Hennessy Restaurant will be serving delicious food all afternoon.

“Armed Forces Day at Newbury Racecourse is a brilliant finale to the flat season here. Not only is it a great opportunity to appreciate the efforts of our Armed Forces personnel and support the work of the British Legion, it’s a fantastic day for all the family.”