In addition to a seven-race thoroughbred card running from 5.35pm to 8.50pm, the ‘Dubai International Arabian Races at Newbury Racecourse 24th July International Stakes’ for purebred Arabians is staged at 5.00pm. There is also plenty of Irish-themed entertainment on offer, with live music from BibleCode Sundays and Steve Carroll & Megan Rhodes.

Polling for the EU referendum will be drawing to a close when Brexit (Pat Phelan/Kieran O’Neill) lines up in the Win Races With Jonathan Portman Novice Auction Fillies’ Race at 6.10pm.

Owned by Tony Smith and The Undecided, the daughter of Bahamian Bounty was fifth on debut in a six-furlong auction novice at Windsor on May 30. 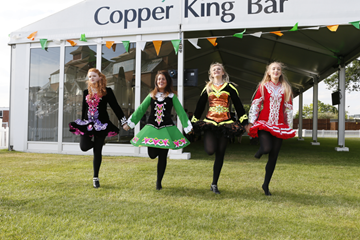 Trainer Pat Phelan said: “The boss [owner] is politically aware and had this name picked out from a long way off. When the whole Brexit thing came out he thought it would be a great name for a racehorse.

“I am not so sure it reflects a political persuasion – it is more about having a name that would be topical at a particular time.

“Brexit has come out of Windsor well. She ran very well and an auction novice is about her standard.I had instructions to have her ready for Thursday and hopefully I have got that much right.
“I would be hopeful of a good run, but the ground is a bit of an unknown.”

Customers who book tickets for Pump Technology Irish Night Live have the opportunity to have the cost of those tickets refunded should the Republic of Ireland beat Italy in their Euro 2016 encounter tomorrow, Wednesday, June 22. The Euro 2016 Offer’, giving offer applies to both Premier Enclosure and Grandstand Enclosure tickets bought online.

Tickets can be bought by selecting the ‘Euro 2016 Money Back Offer’ package on the Pump Technology Irish Night Live page on the Newbury racecourse website. They must be purchased by 8.00pm tomorrow, Wednesday, June 22. The offer does not apply to tickets already bought or ‘bumper’, restaurant or hospitality packages.

Tickets are available at http://newburyracecourse.co.uk/raceday/pump-technology-irish-night/ or by calling 01635 40015 during office hours.