The J P McManus-owned six-year-old, runner-up in the Grade One Weatherbys Champion Bumper at last year’s Cheltenham Festival, has won two of his three starts over hurdles this season, including in a novice event over the course and distance on November 26, when he was a neck too strong for Charmix (11st, Harry Fry).

Nicholls, the champion Jump trainer, who landed the Betfair Hurdle with Zarkandar in 2012, has also left in All Yours (11st 2lb, 16/1), a Grade One scorer at Aintree in 2015 and Some Plan (11st, 20/1), who was fourth in a competitive handicap hurdle at Ascot shortly before Christmas.

An interesting contender is Pearl Castle (10st 9lb, Karl Burke, 25/1). The six-year-old was last seen out on the Flat at Lingfield Park on Saturday, January 22, when he was a staying-on fifth, beaten two lengths, in a competitive conditions race over two miles on Polytrack. The son of Montjeu was a very useful juvenile hurdler two seasons ago when trained by John Quinn and shaped with promise on his most recent start over hurdles when chasing home the progressive Aristo Du Plessis at Musselburgh on New Year’s Day.

Burke, who is based at the historic Spigot Lodge in North Yorkshire, said: “Pearl Castle is definitely under consideration for the Betfair Hurdle. He will either go to Newbury or to the Musselburgh County Hurdle which is four or five days before. A lot will depend on the ground as he doesn’t want it too soft.

“He is in good order and ran very well at Lingfield on Saturday. If the ground came up decent, I think we would probably look at going for the Betfair Hurdle because of the money on offer at Newbury.

“He is a horse with a lot of ability. He probably saves a bit for himself – he is by Montjeu and they can do that. The only run over hurdles he has had since joined us was at Musselburgh on New Year’s Day behind a horse who is a big improver.

“I think he can be competitive in a race like the Betfair Hurdle, although there are obviously some very good horses in there. He has a high cruising speed, stays well and 10st 9lb is a good sort of weight.

“He jumps well enough, but his jumping is probably something which might let him down in a big handicap with all the hustle and bustle. Before he joined us, he did hit a couple of hurdles which may have dented his confidence a bit, but is a horse with plenty of ability when everything goes his way.” 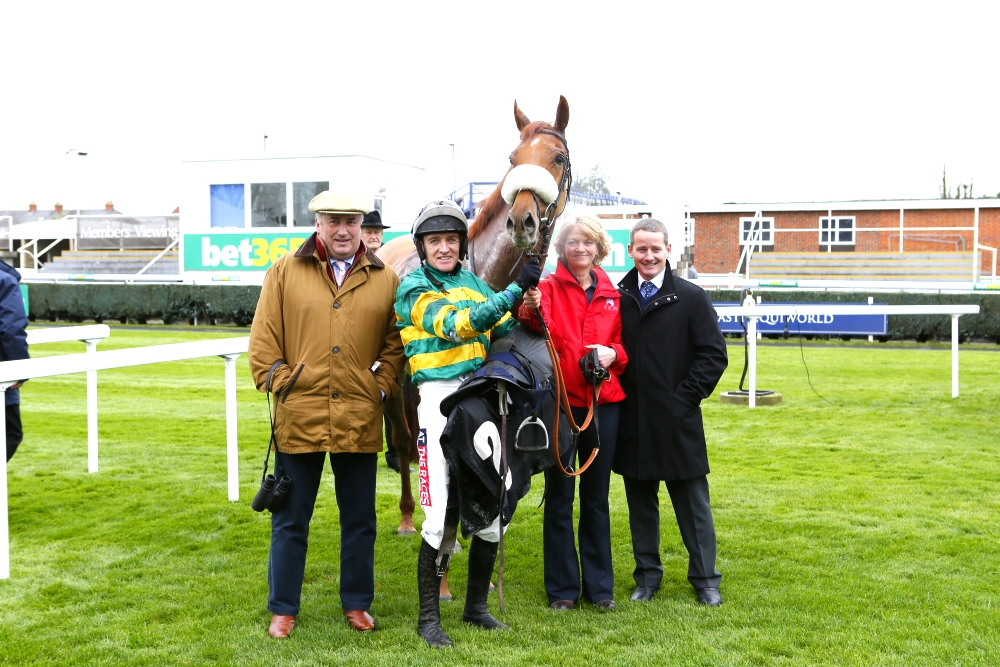 Of the remaining entries, a total of 14 are trained in Ireland including Desoto County (10st 6lb, Gordon Elliott, 12/1), who was a staying-on third in the same Leopardstown contest.

No trainer can boast a better record in the Betfair Hurdle than Lambourn-based Nicky Henderson, who has won the very valuable contest five times. The two remaining entries from Seven Barrows are Days Of Heaven (10st 12lb, 20/1), a Grade Two winner last season but a disappointment on his seasonal reappearance at Cheltenham in November and Cardinal Walter (10st 8lb, 20/1), a useful novice last season but not seen out so far in the 2015/16 campaign.

Betfair spokesman Barry Orr commented today: “Modus continues to head the ante-post betting at 7/1 but War Sound has been the horse punters want to be with in recent days and at 8/1 he is closing in on the Paul Nicholls-trained six-year-old year old at the head of the market.”

The next acceptance stage for the Betfair Hurdle is on Monday, February 8, when the entries for the other races on Betfair Super Saturday will be made.

Newbury Racecourse is offering a limited ‘Outsider Offer’, giving customers who book tickets in the next two weeks for Betfair Super Saturday the opportunity to have the cost of those tickets refunded should a horse priced at 33/1 or higher win the Betfair Hurdle. This offer is available for the first 500 tickets bought and applies to both Premier Enclosure and Grandstand Enclosure tickets bought using the Outsider Offer.

Tickets are available at http://newburyracecourse.co.uk/raceday/betfair-super-saturday/ or by calling 01635 40015 during office hours. The Outsider Offer is limited to the first 500 tickets sold, or until midnight on 8 February 2016, whichever happens sooner. Tickets are priced at £35 for the Premier Enclosure and £24 for the Grandstand enclosure. If no horse starts at 33/1 or higher, no refunds will be given.