The 10-year-old is one of three entries going forward for the Somerset handler along with 6/1 chance War Sound (11st 7lb), who has not been seen out since landing the valuable Swinton Handicap Hurdle in May, and Sternrubin (11st 1lb, 12/1, pictured below), successful in an intermediate handicap hurdle at Newbury in November before dead-heating in a Grade Three handicap hurdle at Ascot shortly before Christmas.

The 5/1 favourite with Betfair is the novice Modus (10st 12lb, Paul Nicholls). The six-year-old won over the course and distance on November 26 and was last seen out when third at Taunton on December 30. 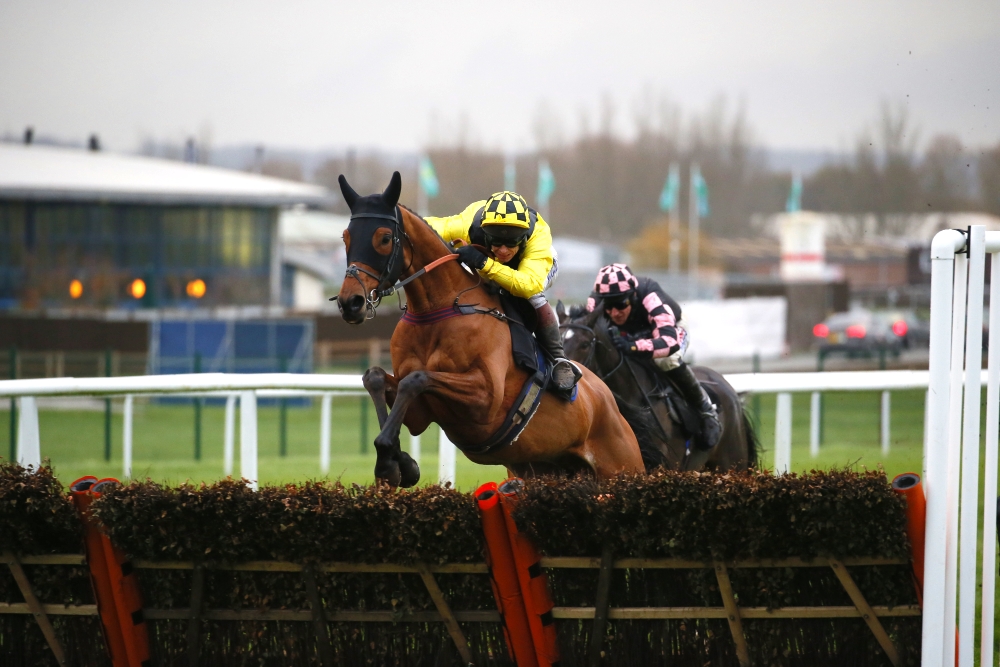 Modus is owned by J P McManus, who has five entries remaining including Blazer (10st 4b, Willie Mullins, 6/1), a comfortable winner at Leopardstown on Saturday (February 6), and Waxies Dargle (11st 1lb, Noel Meade, 20/1), who was third in a Grade Three event at Cheltenham in November but has been disappointing twice since. The Jonjo O’Neill-trained duo of Matorico (10st 9lb, 25/1) and Champagne At Tara (10st 2lb, 25/1) complete the McManus-owned quintet.

An impressive winner on his final start in France, the five-year-old is yet to win in four outings over hurdles in Britain. The best of those efforts came when third to Aristo Du Plessis in a two-mile handicap at Ayr in October and last time out when just touched off under a big weight at Catterick on January 27.

Ellison, who trains in North Yorkshire, said today: “Forest Bihan is fine. He got there a bit too soon at Catterick and was probably a bit unlucky not to win.

“I’m not really concerned about dropping back in trip. Two miles, three furlongs around Catterick is similar to two miles at Newbury on testing ground and you need to stay to win these big handicaps.
“I think he is probably the best horse I have run in the Betfair Hurdle. He is a quality horse and whatever he does now he will be class next year. It has just taken him a while to settle into English racing and he didn’t jump very well when we first got him. He was a bit high, but at Catterick he was brilliant.”

There are nine Irish-trained entries remaining, eight of whom are trained by Willie Mullins. In addition to Blazer, Mullins’ other leading hopes include Dicosimo (11st 9lb, 14/1), a Listed winner at Limerick over Christmas, and Kalkir (11st 6lb, 14/1), who was runner-up in a valuable handicap hurdle at Leopardstown last month.

Other contenders prominent in the market with Betfair include exciting novice Affaire D’Honneur (10st 5lb, Harry Whittington, 10/1) and John Constable (10st 12lb, Evan Williams, 10/1) who finished runner-up to Sternrubin over the course and distance in November.

A maximum of 24 runners can line up in the race over two miles and 69 yards which is due off at 3.35pm on Saturday.

Betfair spokesman Barry Orr commented today: “Modus and War Sound head the market but Saturday’s Leopardstown winner, Blazer, is lurking towards the bottom of the weights and should he get in, which he should do as he is number 26 on this list, I suspect he will go off favourite.

“To reflect the competitiveness of the race, we are paying five places to each way ante-post punters.”

The going at Newbury is currently Heavy, Soft in places.