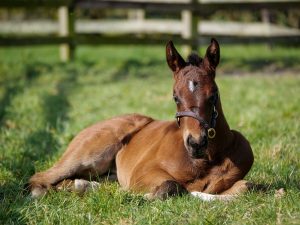 THIS COMPETITION IS NOW CLOSED.

In partnership with sponsors, Watership Down Stud, we are delighted to offer you the chance to name one of their beautifully bred foals, a bay filly who was born on the 10 March 2022, by the legendary sire, Frankel and out of the Group winning mare, So Mi Dar.

So Mi Dar herself proved her ability on the racecourse when placing 3rd in the G1 Prix de l’Opera and winning the G3 Musidora stakes in 2016. She hails from the remarkable Watership Down mare, DAR RE MI, who has produced two stallions and four Group performers, including European Champion two-year-old TOO DARN HOT (Dubawi). He stands at Darley’s Dalham Hall Stud and has his first crop of yearlings in 2022.

Watership Down Stud owners, Lord and Lady Lloyd Webber have enjoyed numerous successes over the years and take great pride in the naming of their homebreds, with horses such as Dar Re Mi, Lar Ti Dah, So Mi Dar and Too Darn Hot, all heavily influenced by a musical undertone.  It will be them who decide the winning entry.

To help you with your selection which will be announced Monday 2 May, here’s a few hints and tips:

Entries will close on Sunday 24 April at midnight so get your thinking caps on!

The winning prize for the selected name will include: